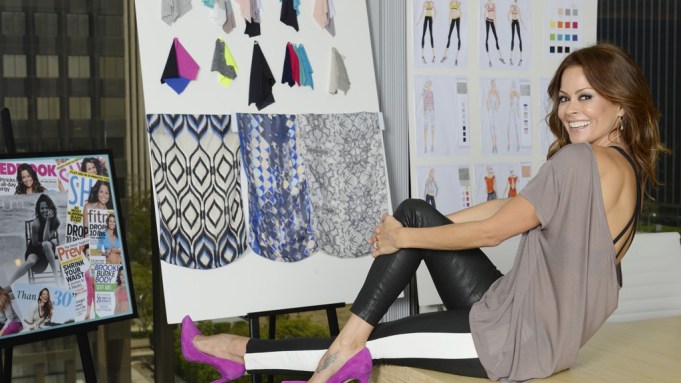 LOS ANGELES — Since not every woman is blessed with Brooke Burke’s fit physique, the actress is offering them an incentive to get toned: a new activewear line called Caelum.

Partnering with her brother-in-law Danny Guez, who previously launched fashion lines with Justin Timberlake and Kellan Lutz, Burke is readying the spring debut of her first effort in fashion design. Translated as “chisel” in Latin, Caelum is an acronym for words that Burke associates with a healthy lifestyle: core, active, evolve, live, uplift and motivate. She also advocates accessibility, as every piece retails for less than $100.

“I just wasn’t finding pieces that I really felt were functional or beautiful,” Burke said of the activewear market. “I want this to be more affordable than the high-performance brands out there.”

Layering is a key look for the line, enabled by sheer, tissue-light fabrics such as Modal and mesh, cropped hemlines and draping techniques. Neon yellow, coral, hot pink and abstract geometric prints in blue and green are accents for the neutral base colors. While performance textiles are used for 25 percent of the lineup, the remainder consists of luxe fabrics for the lifestyle component.

“Fitness is being more fashionable,” Burke said, noting that the aesthetic aim is to be a cross of Helmut Lang and Lululemon.

For a recent photo shoot at Guez’s office here, Burke exemplified the crossover between contemporary fashion and activewear by donning her line’s open-back T-shirt over a sports bra that has four straps crisscrossing in the back for a cutout effect. She paired them with leather leggings by American Retro, fuchsia suede pumps by Rachel Roy and an Alexander McQueen handbag.

“Things are changing in fitness,” she said. “Women are working out often, and they’re working harder and staying in [activewear] all day.”

The designs fill a void that Burke saw in her own wardrobe. There are cropped knit tights enhanced with ruching on the bottom hem, oversize hoodies cut out of Modal with cotton pointelle panels and muscle Ts with high-low hems and a column of twisted fabric in the back.

“For the fit, it’s basic hard-core performance [activewear],” Burke said. “Then you flip it over and that’s what I mean by your element of style and fashion.”

With commitments from Bloomingdale’s and Nordstrom to carry the line, Guez projects that first-year sales will reach between $8 million and $15 million. His goal is to also sell to other major department stores including Saks Fifth Avenue and Hudson’s Bay, while limiting the specialty store distribution to 30 retailers such as Revolveclothing.com, Shopbop.com and Planet Blue. Following the spring debut of 85 stockkeeping units, Caelum will introduce accessories such as socks and yoga mats for holiday 2014. Eighteen months after the launch, it will expand further with a lower-priced line and children’s activewear.

Burke is the latest competitor in the thriving field for fashionable fitness clothes. To lift Caelum above the others, she’s leveraging her celebrity and credibility. Married to actor David Charvet, the 42-year-old mother of four not only won “Dancing With the Stars” in 2008, but also stars in exercise DVDs and teaches a class called “Booty Burn” in Malibu, where she had some students work out in the samples. She inspires women to walk off calories in ads for Skechers and models lingerie for IntiMint, BeachMint’s subscription-based Web site.

In the celebrity fashion market, “a lot of it has moved from celebrity to authority and experts,” said Maggie Dumais, who handles branding and licensing for talent agency Innovative Artists and guided Lutz in building his apparel brand Abbot + Main with Guez. “The consumer is savvy. They know if a fashion line has a celebrity name slapped on it.”

“Brooke lives the actual lifestyle,” said Guez, who can attest to his sister-in-law whipping up protein shakes every morning for him when he lived with her and his brother. “This isn’t a me-too [line].”

The biggest cheerleader is Burke, who will stand front and center for the billboard ads in New York’s Times Square and on Los Angeles’ Sunset Strip and offer gifts to celebrity friends as well as “Dancing With the Stars” contestants. A past cover girl for magazines including Shape, Redbook and Fitness, she said Caelum will be part of her daily regimen.

“The goal is to wear Caelum in every future opportunity,” she said.