Executive creative director Adrian Josef Margelist will be based in Zurich and also provide direction to the growing China business.

Burton is beefing up its team.

The Burlington, Vt.-based sports brand has hired an executive creative director and a new head of global marketing as it positions itself for growth both domestically and abroad.

Adrian Josef Margelist has joined the company in the top creative role and Kelly Murnaghan has been named senior vice president of global marketing. Both report to John Lacy, who was elevated to sole chief executive officer of Burton in February.

Lacy said it’s been an ongoing joke internally that the pandemic hit right after Donna Carpenter, widow of founder Jake Burton Carpenter, relinquished her co-ceo position to him and became chairman of the board.

“It’s been a challenge, but I’ve also had such amazing support,” he said. Since the coronavirus emerged, it has prompted the company to “reimagine our view for Burton and accelerate what we’d already started,” he said, which is to become a “digital-first retailer of the future.” He said it is referred to internally as the “trail map” of the business.

Direct-to-consumer currently accounts for around 25 percent of the company’s overall sales. Burton has more than 60 stores around the world, some wholly owned and others operated by partners in resort areas such as Vail, Colo. Four more will be opening this year in Shanghai, Stockholm, Denver and Sapporo, Japan. It also has an e-commerce site.

But when the pandemic hit, the company’s wholesale business “froze, as did our own stores,” he said. “So we accelerated our online business. We’ve had a long run being an online player and our aspiration is to make that close to 40 percent or more [of sales] over the next five years.”

At the same time, China is a major area of focus. “We’re going to be ramping up our China business,” he said. That region currently accounts for less than 5 percent of sales, even though the company has operated there for more than 20 years.

That changed a year ago when Burton created a joint venture with Hillhouse Capital, an Asian private equity firm founded by Lei Zhang, who Lacy said is a “passionate snowboarder.” Lacy said expectations are high with the 2022 Olympics “right around the corner.”

Margelist will play a major part in the company’s planned Asian expansion. He will be based in his hometown of Zurich, and half of his time will be devoted to leading Burton’s overall creative direction, while the other half will be to provide creative direction to Burton’s joint venture in China. Margelist has more than 20 years of experience in international fashion, lifestyle and consumer goods. Most recently he was chief creative officer of Mammut, a Swiss mountaineering and trekking company, a role he held for 10 years. He has also worked for Esprit, MCM and Liebeskind.

“Once we get to the other side of the pandemic, Adrian will travel and work with our China team to bring the brand to the next level,” Lacy said. He said Margelist actually started a conversation with Jake and Donna Carpenter last winter when they were living in Zurich and they realized they “shared similar attributes,” he said.

“I’ve been a fan of Burton since 1987 when I started snowboarding in the Swiss Alps,” said Margelist. “Back then, if someone told me that I would one day have the honor to work with the teams at Burton, I would have never believed it. Today, I feel humbled, honored and stoked to have this opportunity. My sincere hope is that my decades of experience within the outdoor, lifestyle and fashion industries combined with the ample time I’ve spent working and living in Asia will help guide and support the teams during this next era of Burton.”

Murnaghan, who joined the company two weeks ago, will oversee the company’s marketing strategy and positioning globally. In addition, she will help build on Burton’s commitment to become a more diverse and inclusive company. 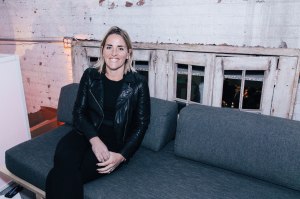 She started her career at various advertising agencies before moving to Converse Inc. in Boston, where she held various director-level positions, and then joined Vans in California as vice president of marketing for North America. Most recently she was chief marketing officer at Lagunitas.

Lacy said Murnaghan was on the short list of candidates to oversee Burton’s marketing two years ago when Sarah Crockett was appointed chief marketing officer. After she left the company in May, Lacy said Burton contacted Murnaghan and reworked the position to “build her a path to grow within the organization.”

Lacy said that Jake and Donna Carpenter’s three sons remain active in the privately held business, with Timi working on Mine77, a collection created by his father in 2018; George, who is involved with the company’s diversity, equity and inclusion efforts, and Taylor, who is in sales.