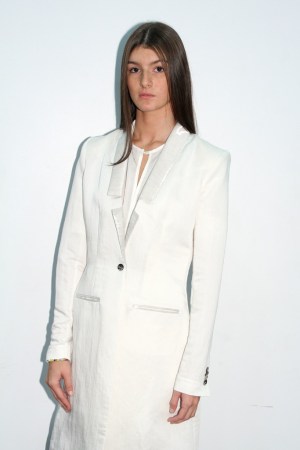 The three-day show, which closed Thursday, was created in 2007 to showcase contemporary and designer men’s wear and accessories. A women’s segment followed in 2009 with a focus on up-and-coming designers and emerging brands.

“Attendance was up 10 to 15 percent over last year. Major stores and smaller specialty boutiques came in. It’s a very international crowd looking for fresh ideas. Retailers want to have exclusive product that nobody else has,” explained Sultanik.

The open-space environment of the enclosed Basketball City setting awash with natural light lent a laid-back, stress-free ambience that’s typically not found at trade shows. Stands were comprised of rustic wood tables and display areas where a number of exhibitors brought family pets, and visitors were encouraged to get some sun and eat barbecue on a sprawling outside terrace.

But while the mood was light and fun, exhibitors generally said they were pleased with the pace of business, which they described as brisk the first two days. Exhibitors also noted that retailers were more open to new ideas and risk-taking if the product was unique and trend-right.

“Capsule is a smaller show with more independent brands doing their thing. I like the open space with wide aisles because people can see the designs accurately….This is my second trade show and I plan to do Capsule New York again. I’ll be at the Capsule show in Paris later this month,” said Garcia.

Verlaine, which does production in New York, is a three-year-old contemporary brand that is rendered in specialty fabrics such as Japanese jerseys with blends of Tencel or silk, Italian cashmere, and modernistic treatments including linen and plastic lapels.

Tolga Dikencik, designer for Istanbul-based Cashmere in Love, said this is the brand’s second showing at Capsule New York and she plans to do a second presentation at the Sept. 28 to 30 Capsule women’s fair in Paris.

“Showing in New York is important for us because buyers can focus on product.…We got four new orders at the last show and it looks like we’ll have four more from this show,” said Dikencik, who created her cashmere and silk brand of dresses and separates in 2007.

Meanwhile, a combination of feminine and tough was the aesthetic goal for Titania Inglis, designer of the young, contemporary brand that bears her name.

“I had a really good show this time around, but orders haven’t yet been finalized with buyers and scouts I met at the previous show,” said Inglis, whose design studio is in Brooklyn.

Regarding the look of Inglis’ collection, she said, “I love tweaking juxtapositions of fabrics with soft and ethereal [silks and chiffons] and organic salvaged cotton denim from Japan. I hand wash and scrunch the edges.”

“It’s been a very good show and we’ve seen many new shops.…We’ve had orders from 10 boutiques,” commented Marie Louise Mogensen, sales representative for Base Range, a Danish maker of bamboo-blend underwear and casual apparel.

She said Capsule was the “perfect” format to introduce the brand’s foray into swimwear.

“The swimwear is made of organic cotton and elastane and it’s been well received.…It’s our third Capsule show in New York and we’ll be doing a third round in Paris,” she noted.