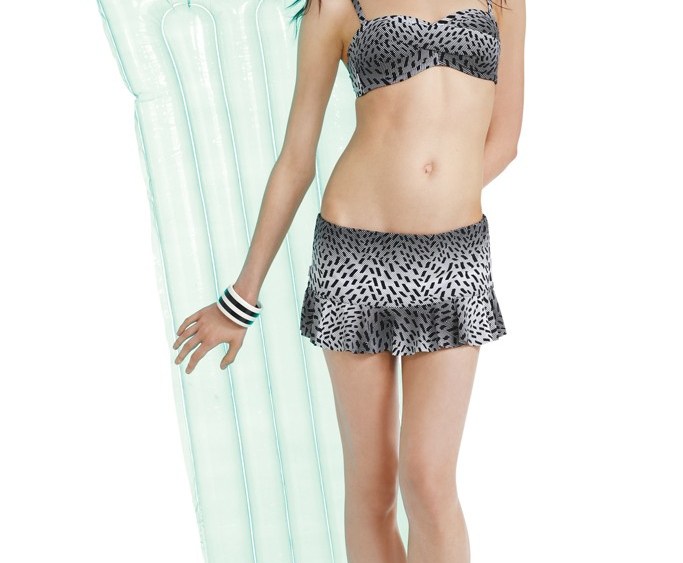 Swimwear is poised for worldwide growth.

The global swimwear and beachwear market is estimated to be close to $16.5 billion this year, and is further projected to grow at a compounded annual growth rate of 3.1 percent to $19.4 billion by 2018, according to Global Industry Analysts Inc. And that means big opportunities for makers and merchants in the category.

For the U.S. swim and beachwear market — which currently generates more than $4.18 billion in combined women’s, men’s and kids’ swimwear — key factors include increasing consciousness about health and fitness, emphasis on wellness and body care, the escalation of beauty and spa industries worldwide, and the introduction of innovative products, such as UV protection swimsuits and thermal swimwear, say executives.

In the U.S., the postrecession economy doesn’t appear to have impacted sales of women’s swimwear, which have held steady with a slight 0.2 percent increase to $2.89 billion from May 2012 to April 2013, reported The NPD Group/Consumer Tracking Service.

Following a strong preview week in June at showrooms in New York and Los Angeles, industry executives said they are bullish about sales in the fourth quarter and the first half of 2014. Now regarded as a year-round business, vendors are increasingly offering expanded core basics in a range of fashion colors and prints for immediate delivery, as well as multipurpose items such as convertible swimwear tops and layering pieces that can double as ready-to-wear. Beach cover-ups are also a strong classification, and a growing number of consumers are wearing long and short cover-ups as leisure dresses and evening gowns.

In the men’s arena, there’s also big demand for dual-purpose items such as shorts, particularly boardshorts, that are being worn as casual clothing.

Marshal Cohen, chief industry analyst at NPD, said global swimwear will “definitely have a good year in 2014. Casual dressing is taking on a new dimension, and swimwear is absolutely poised to have a very good year because of that and other lifestyle factors.”

RELATED STORY: Ones To Watch in Miami >>

In southern Florida, “Meet Me in Miami” is fast becoming a favorite phrase among swimwear executives who plan to launch brands and collaborations in an international spotlight. Besides being a global swimwear mecca, executives said the cachet of Miami’s Latin beat, Art Deco architecture and glittery night life will be enhanced this year by nearly double the number of catwalk shows and presentations, parties and spalike perks hosted by entrepreneurs and beachfront hotels.

Guido Campello, vice president of Miami-based Cosabella, described the mood of exhibitors and retailers this way: “When people come to Miami, they want to enjoy the hotels, get to the beach….Buyers will definitely be looking for ‘me’ time. It’s now much more about the Miami Beach culture, and buyers know they have two free [expenses paid] days and they want to enjoy it. Hotels like The Webster, The Delano, The Raleigh and W South Beach are motivated to host the buyers — especially W, which has been at the forefront of promoting Miami Beach.”

Several major trade fairs, as well as smaller boutique-style settings in hotel suites, will kick off the cruise 2013 and spring 2014 seasons with a slew of new collections, brands and first-time exhibitors. Venues include the Miami SwimShow & Lingerie Show at the Miami Convention Center, catering to a broad spectrum of brands and running July 20 to 23. Mercedes-Benz Fashion Week Swim at The Raleigh Hotel in South Beach will host more than 30 designer runway shows, presentations and special events throughout the week.

There will also be a bevy of popular formats like Salon Allure at the W South Beach (also July 20 to 23), inside private suites, where exhibitors will include Marysia Swim, 6 Shore Road, Acacia Swimwear, Barraca Chic, Issa de’ mar, Kikidoll, Mikoh Swimwear, Salt Swimwear, So De Mel Swim and Greenlee Swim.

Cabana, a new concept created by Sam Ben-Avraham and Janet Wong, will take place in a 15,000-square-foot tent situated on a stretch of oceanfront sand between the W and the Setai Miami Beach hotels. Scheduled for July 20 to 22, Cabana will host brands like Mara Hoffman, Tori Praver, Calypso St. Barth, Miguelina, Sundek, Bantu, Venroy and Liya Kebede’s Lemlem.

Also new to Swim Week will be Standard Swim at the Standard Spa, replete with a mud lounge and infinity pool as well as a barbecue hosted with The Webster and karaoke with Linda Farrow. Standard Swim will showcase swimwear collections by Araks, Prism and We Are Handsome, while Ivy Kirzhner and Melissa Shoes will show swim-inspired footwear and accessories.

This year’s SwimShow, which is celebrating its 31st anniversary, will be packed with a record number of fashion shows, events and seminars, said Judy Stein, executive director of the Swimwear Association of Florida, organizer of SwimShow.

“SwimShow is expanding this year,” said Stein. “We’re adding another hall at the Miami Beach Convention Center offering close to 400,000 square feet. The demand for space at SwimShow has absolutely skyrocketed, which meant at times we had to turn away new brands. This expansion will give more companies a chance to show and become one of our members.”

Among new members, she added, are Dsquared2, Balmain, Tom Ford Sunglasses, Givenchy Sunglasses, Amanda Wakeley, Cynthia Rowley, Save the Queen, Tara Matthews, and Frescobol Carioca. There will also be a new line collaboration between Melissa Odabash and Gwyneth Paltrow.

A large turnout of international retailers is expected at SwimShow, said Stein, consistent with the 10 percent growth rate the fair has registered each year. There are more than 2,500 brands from 60-plus countries, and more than 2,000 buyers are expected. In all, more than 8,500 people will attend. There will be expanded areas for lingerie and men’s and children’s products, as well as a new space dedicated to active and lifestyle-oriented merchandise.

A main supporter of Miami Swim Week is Invista, which will be a sponsor of the Comfort Zone at SwimShow, a lounge where attendees can relax and learn more about Xtra Life Lycra through brochures and videos. Invista will also support Salon Allure.

“We’ve been a sponsor of Salon Allure for the past four years, but this is the first year as title sponsor. We’ll be part of a video and photo shoot with a Sports Illustrated model wearing swimwear brands with Xtra Life Lycra fiber from the Salon Allure show,” said Dianne W. Lober, Invista’s marketing communications manager. “A live fashion show and opening-night party on July 19 will feature a video of the photo shoot streaming in the background.”

Rick Fatzinger, cofounder of Salon Allure, said the alliance with Invista is “an essential element in continuing to move the swim industry forward. Representing the highest quality in design and performance, Xtra Life Lycra is the natural partner for Salon Allure.”

The action will also be heating up at Mercedez-Benz Fashion Week Swim, where shows and presentations will be staged hourly from 6 to 11 p.m. at The Raleigh hotel, said Christina Neault, executive producer of IMG Fashion Events and Properties, which operates the Mercedes-Benz extravaganza.

“This event draws celebrities who have houses in Miami, and we get a huge amount of buzz,” said Neault. “Over five days, we will host over 10,000 members of the press, buyers, designers [and] stylists.”

To engage more fashionable consumers and extend the momentum across South Beach, IMG Fashion is also doing two film screenings: “The Tents,” a documentary to be shown on the making of Mercedes-Benz Fashion Week, on July 16, and a screening on July 20 of “Scatter My Ashes at Bergdorf’s,” to be hosted by Bergdorf Goodman senior vice president Linda Fargo and designer Naeem Khan.

Neault added that the number of international attendees is growing at a fast clip. “We now have several brands from Brazil, Colombia, Peru, Spain, India and Australia. Miami is the gateway to Latin America, and we get a lot of press from Latin America,” she said.

Addressing the importance of the Miami venue, Linda Sassoon, president of Gottex USA and Canada, said the brand has been exhibiting at SwimShow for more than two decades. “The show is very useful for most of our customers, even those who preview [the collection] in June. We present a 35-to-40-minute fashion show with eight models at the Gottex stand so people can get an overview of what’s going on,” she said.

“This has been successful for us because it makes it [the collection] very clear for buyers and customers,” explained Sassoon.

Exposure to the international marketplace during Swim Week is “inspirational” for Julie Gosselin, head designer at Trimera Swim of Montreal. Trimera’s portfolio includes Oakley, Captiva by Christina, Contour by Christina, Be Creative and the licensed BCBGeneration brands.

“It’s very directional for me as a designer. I love to hear which styles, colors and prints people respond to and want for future collections. The show gives me direction for 2015,” she said.

For Nicole Hanriot, founder and designer of California-based Beach Riot, Miami is the go-to destination to drum up business.

“We love it because it’s so international — we hope to build business in Japan at SwimShow. We’ll be launching our first resort collection, a collaboration with Stone Cold Fox, and an accessories line of sunglasses, bikini bags and beach towels,” she said.

Among the collaborations launching at SwimShow is an endeavor between Peter Som and Parasolsun.com, a luxe resort brand founded by Alexandra Kotur, former style director at Vogue. Parasolsun.com, which features swimwear and cover-ups that protect the skin against harmful sun exposure, will also present a new line of hats, sunscreens and sunglasses.

“Peter Som has designed a print for us in two colorways — a graphic geometric print in bright colors,” said Fernanda Niven, creative director of Parasolsun.com. “The idea is to do a collaboration for every collection and season.”