The thong specialist will be introducing four initiatives to commemorate its silver jubilee including a collaboration with Anna Sui. 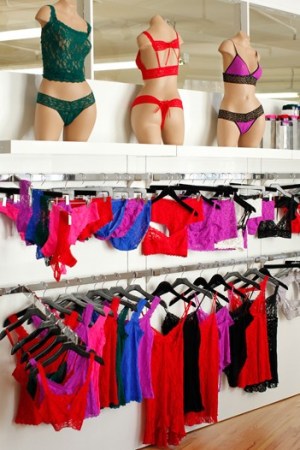 Hanky Panky is celebrating the 25th anniversary of what it markets as “The World’s Most Comfortable Thong.”

The thong specialist will be introducing four initiatives to commemorate the silver jubilee for what retailers and consumers have known as the Original Thong, or style 4811:

• An “Anna Sui Celebrates Hanky Panky” collection of seven pieces in an exclusive color print called Anna-ver-Sui in shades of violet, lilac and lavender on a black ground. It launches in September.

• A limited edition of 25-piece Thong Boxes with lingerie wash tubs, a history of the thong booklet and a commemorative hang tag now selling for $399 at hankypanky.com.

• A Do-It-Yourself thong kit equipped with one white thong, a mini sewing kit, and ribbons, bows, laces and rose appliqués to individualize the thong.

• A “Make the Original Thong Your Original” online contest at hankypanky.com, which will be staged beginning today through July 1. There will be three categories: Gale and Lida’s Favorites, Best Uses of Recycled Materials and Best Use of Colors. One winner from each category will receive a $1,000 cash award and a limited edition 25-piece Thong Box. Honorable mentions for each category will receive a $250 gift card redeemable on the site. The contest will be promoted on Facebook and Twitter. Winners will be revealed July 8.

How did the company’s chief executive officer Lida Orzeck and creative director Gale Epstein get into the thong business?

They started their company in 1977 as a specialist of G-strings. But the influence of dental-floss-style thong bikinis on Brazilian beaches in the Eighties inspired the duo to create an undergarment that still maintained its sex appeal but was more comfortable than a G-string. Since then, the $50 million company has expanded basic and fashion assortments to include boy-cut undies, coordinating triangle bras, sleepwear, and daywear items such as camis and matching bottoms. There’s also a brightly colored collegiate group aimed at younger women who shop for hip lingerie brands like Pink at Victoria’s Secret.

The company’s name, Hanky Panky, was created when Epstein gave Orzeck a birthday gift of lingerie made of hand-embroidered hankies. The Metropolitan Museum of Art has the original handkerchief lingerie as part of its permanent collection.

But some retailers during the Eighties era of conspicuous consumption thought the Hanky Panky name was too racy.

“The Hanky Panky name posed a problem in those days because it was considered very risqué, even exotic,” said Orzeck. “Stores like Bergdorf Goodman and Neiman Marcus would not buy our products.”

Despite the cold shoulder from major specialty stores, Epstein said the idea of stretch cotton and stretch nylon lace thongs caught on because of Lycra spandex apparel.

“Pants were getting tighter and tighter…I really do believe that women saw how unattractive a visible panty line was. Since, all of the buzz has come from our customers. All of our publicity has been word-of-mouth,” said Epstein, noting that specialty boutiques embraced the idea of thongs.

However, the Hanky Panky name continues to generate lots of attention, especially on the Web.

“We’re on Google Alert for whenever Hanky Panky comes up online. The first two alerts are usually about political hanky panky and sexual liaisons, and then The Original Thong by Hanky Panky, comes up,” said Epstein.

Addressing Sui’s connection with Hanky Panky, Epstein and Sui worked together in the Seventies at a large, corporate sportswear firm. Epstein described the collaboration with Sui for fall as a “natural, co-brand opportunity since we share a very similar approach to design that is both feminine and wearable.”

Sui, a self-described “fan” of Hanky Panky, said the brand “epitomizes creativity, style and true quality — three things that have been the cornerstone of my work as a designer.”

Regarding how the company is coping with the rising costs of raw materials and labor, Orzeck said business has not been impacted.

“We always like to stress our products are made in Made in the U.S.A., made in New York. We have no [manufacturing and delivery] problems,” said Orzeck. She is projecting sales gains in the “low double-digits” this year.