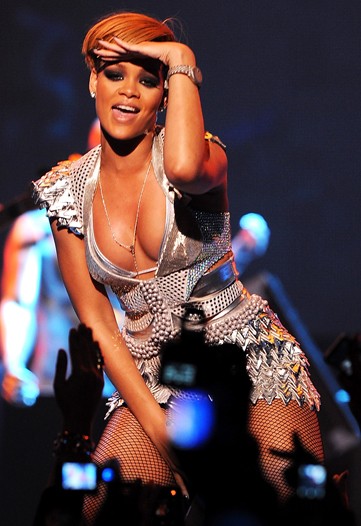 Building on a combination of celebrity buzz and media glitz, shapewear is seeing a renaissance after four decades of flat sales.

Annual retail sales of shapewear — undergarments that control and smooth figure problems — grew 10.6 percent to $848.3 million from March 2009 to February 2010, and unit sales increased 3.8 percent during that period, according to The NPD Group research consultancy. A leading area of growth was plus sizes of XL to XXXL or larger, with sales gains of 14.8 percent last year.

The reinvention of the category began on the red carpet when celebrities such as Gwyneth Paltrow, Jessica Alba, Oprah Winfrey and Queen Latifah started talking about wearing Spanx shapers — manufactured with advanced fabric technology — under their evening gowns. It picked up steam last year when Lady Gaga, who often wears underpinnings as apparel, along with Rihanna and Beyoncé helped ignite demand when they were seen in provocative corsetry and other lingerie looks at the Grammys and the American Music Awards, as well as in magazines.

The trend also has been propelled by shapewear and corsetry featured in popular TV shows like AMC’s “Mad Men,” HBO’s “Diary of a Call Girl” and “The Tudors,” and ABC’s “Desperate Housewives.”

Shapewear started declining when the miniskirt became popular in 1965, and the introduction of seamless pantyhose made obsolete the need for multiple layers of intimate apparel such as control briefs with garters. Women are now building shapewear wardrobes of basic and specialty pieces like control camis, waist cinchers and all-in-one body shapers, much in the same manner as they’ve made bras, tank tops and undies wardrobe staples.

The profile of vintage girdles and the tiny waists they create should ramp up in 2011. For example, retro girdles will be a costuming focus of the HBO miniseries ‘Mildred Pierce,” starring Kate Winslet and based on the 1945 movie for which Joan Crawford won an Oscar, said Ann Roth, who is designing the costumes.

Roth, herself an Academy Award winner for “The English Patient” in 1996, said, “I have every single woman in a girdle, a straight-across girdle. I always do that so they sit properly.”

“There has to be something of a fashion authority, something that shows people looking good in what they’re wearing, whether it’s prime time TV, a fashion show in Paris or an ad in Vogue,” Thompson said. “If it goes to the extreme item such as Lady Gaga or Rihanna wearing foundations, you will see a huge interest all of a sudden in something like a corset. That’s when it gets to be a smoking gun.…As brilliant as ‘Mad Men’ is about Americans in the early Sixties — the show makes old Fifties girdles look so fabulous under clothing — it’s more brilliant as an ad for undergarments.”

Guido Campello, vice president of marketing and innovation for Cosabella, an Italian-made intimates brand sold worldwide, said the company began receiving a stream of e-mails from retailers requesting shapewear immediately after the Grammys and the American Music Awards.

“We didn’t expect we had a market for shapewear, especially in Italy,” he said. “But it’s because of the entertainment artists, such as Lady Gaga, Rihanna, Beyoncé, and even Eva Longoria in ‘Desperate Housewives,’ which has taken over ‘Sex and the City’ worldwide.”

“Italians love to wear everything American, and after the Grammys and AMA aired, we received tons of e-mails from retailers,” Campello recalled. “A lot of e-mails said, ‘I remember you do shapewear. I would like to see it after seeing all of those [lingerie-shapewear] looks at the Grammys and the AMA.”

Cosabella, which holds the lingerie license for “Sex and the City,” introduced a line of Smooth by Cosabella shapers in spring 2009.

Maureen Stabnau, senior vice president of merchandising at barenecessities.com, an e-commerce site specializing in intimates, said shapewear is becoming an everyday item because of the celebrity factor.

“We started seeing this happening about two years ago with red carpet-ready celebrities saying, ‘I’ve got my Spanx on.’ It also became a secret weapon for celebrity stylists, and shapewear came out of the closet,” she said. “Our shapewear business is doing very well, and our plus-size shapewear business is ahead by 25 to 30 percent over the past year. It’s not necessarily about being smaller; it’s about making you look smooth.”

“We are having a lot of requests from department stores and smaller specialty stores for shapewear that goes up to XXL. The category in larger sizes has really gained momentum because shapewear has become such a hot button,” he said, adding shapewear “is our biggest area of growth for the next three years in our plans.”

Innovation and technology have also affected the resurgence. Heat-sealed applications and laser-cut treatments as well as lightweight microfiber blends with Lycra spandex, Modal, Meryl and organic blends such as bamboo with cotton have modernized the shapewear business.

“Lycra spandex, microfibers, and antibacterial and moisture-repellent applications have been very important,” said Juan Duque, president of the North American division of Leonisa, which is based in Colombia. ‘We have seen 50 percent growth over the past year in the U.S. market, and we believe the potential for shapewear is still not tapped.”