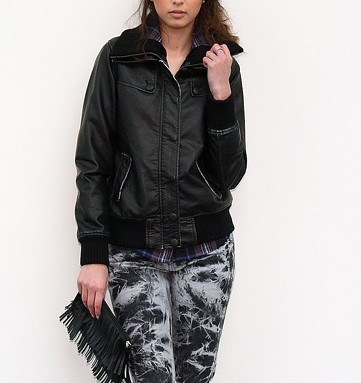 SAN DIEGO — In a sign of the difficult times, Quiksilver Inc., Roxy, Hurley International and Rvca skipped the ASR Trade Expo as surf, skate and snowboard firms injected more fashion into lines and introduced higher-end labels to enhance their appeal to sophisticated customers.

Such was the mood that Podium Distribution, which owns apparel and footwear brands including Matix, designed its booth to resemble a homeless encampment. The name — “Camp Recession.”

The economy and complaints from retailers about inferior quality and sameness spurred the initiatives among companies that moved to expand business even as others retrenched at the semiannual show that ended its three-day run Saturday at the San Diego Convention Center.

DC Shoes introduced silk-cashmere cardigans and hooded jackets made with real leather as part of its new premium line, which made its debut for fall with prices at least 35 percent higher than those for its main grouping. Fox also incorporated lamb leather, Sasquatch fur and better materials in a new line called Fox Deluxe, wholesaling for as much as $225.

On the flip side, Reef, the Carlsbad, Calif.-based sandal brand owned by VF Corp., is dropping handbags and accessories, limiting sportswear offerings to sundresses and cover-ups and licensing its swimwear collection to Raj Manufacturing Inc., based in Tustin, Calif. Reef recently laid off one-third of its employees — mostly in the women’s apparel division — as it revamped its clothing business for the spring 2010 season.

“The plan was to be able to get through this season [and] to maintain a profitable business model through this sparse part of the economy,” said Brett Savage, Reef’s vice president of product.

Kevin Valenzuala, owner of South Pacific Surf Shop in Chula Vista, Calif., said his average sales ticket has dropped to between $30 and $40, about half of what it was a year ago. “The only things selling are T-shirts, fleece for men and anything cheap or on sale,” he said.

Vendors dealt with the ramifications of retailers’ tighter budgets. With merchants placing late orders, Billabong showed its summer collection, even though the first delivery is slated for Feb. 15. However, New Zealand’s Few estimated that 60 percent of its retailers will place minimal first orders for fall and, depending on sales, file bigger reorders later.

Even after offering free registration for qualified retailers, ASR said the number of buyers decreased — though not as steeply as forecast — but didn’t disclose a figure. ASR counted 6,200 buyers last September, which highlighted the industry’s much larger spring collections. Since most foreign currencies are still relatively strong, international retailers from Japan to the Middle East descended on ASR.

To help lure new retailers at next September’s show, ASR partnered with a Los Angeles-based trade show called Class to host a new section targeted at boutique buyers and some 100 contemporary labels, including Modern Amusement, Original Penguin and Howe.

Low prices topped the criteria for many buyers last week.

“It’s all about having things that stand out, but that customers regard as being a bargain or a great value — $39.50 is our magic price point right now,” said Mary Boehne, a buyer for specialty retailer Infinity Surfboards in Dana Point, Calif.

Women’s labels tried to offer something for everyone.

O’Neill cut black fleece into a motorcycle jacket spliced with gold zippers and Rusty sewed a satin lapel on a black cotton tuxedo jacket; both wholesale for less than $40. WeAretheSuperlativeConspiracy, or WeSC, and Matix jumped early on the trend for boyfriend jeans, while Element Eden covered skinny legs in $33 tie-dyed denim. Ezekiel wooed buyers searching for different silhouettes with a $38 Aztec-print cardigan that had bell sleeves. Dresses remained popular, as seen in Fox’s $27 drop-waist flannel minidress. Billabong gained momentum for its fashion-forward sub-brand, Designer’s Closet, which offered a $17 tie-dyed viscose jersey tank and $22 Seventies-style high-waisted shorts.

In men’s wear, vendors adopted a blue-collar response to uncertain times with abundant workwear-inspired apparel. Lightweight plaid flannel shirts, which typically wholesale from about $18 to $32, resonated with a small group of action sports labels for holiday 2008. Now they are widely popular in color pops reminiscent of the early Nineties, like eggplant, teal, burgundy and marigold. Some brands opted for a straight-up lumberjack aesthetic, with plaids in black, gray and rust. Impossibly skinny jeans were replaced by workwear styles with longer rises and wider legs tapering at the hem.

Retailers responded to the mellow palette.

“Fleece and T-shirts are doing well in blacks, whites and charcoals,” said Maria Cabral of Ross Stores, who was buying for young men and boys.

Many brands referenced vintage pieces or technical gear for revamped hoodie collections. Oakley enhanced a $40 jacquard ski sweater with parachutes and other military imagery. With deep roots in motorcross, Italy’s Alpinestars fashioned a hoodie to resemble a leather racing jacket.

Vivid color in boardshorts, however, livened up a few collections. Billabong and Lost featured vibrant all-over prints, while O’Neill used fluorescent orange and green dip dyes. Most boardshort lengths hovered slightly below the knee — perhaps an implicit rejection of the shorter, kitschier styles that emerged in recent seasons.

Women’s swimwear, typically lighter at ASR in January than in September, was more pared down than usual. Billabong moved forward with developing Tigerlily, an Australian brand boasting a strong swimwear heritage, which it purchased in 2007. Candy Harris, Tigerlily’s brand director, said with retail prices ranging between $110 and $250, Tigerlily will land in some 75 key U.S. boutique doors in roughly six months.

Newport Beach, Calif.-based surf brand Toes on the Nose introduced a contemporary women’s swim line. Swimwear designer Elena Sosa said the new line — priced mostly from $25 to $30 at wholesale and aimed at women ages 25 to 50 — is geared toward active, older consumers underserved in the surf market.

Established swimwear brands highlighted their longevity as a strength.

“A lot of customers are getting rid of their fringe suppliers,” said Noah Gellis, sales and marketing director for Montreal-based SGS Sports Inc., which produces Body Glove’s swimwear under license.

In accessories, faux leather was the material of choice in bags. “We are not carrying cotton bags because people are not buying them,” said Kathy Nolan, a merchandiser at Element Eden. She pointed to $40 as the cap for retail prices.

Accessory designers strove to incorporate the latest trends. Fringe was popular on bags wholesaling for between $13 and $36 at Element Eden and for $14 at Lost. Pyramid studs covered a Fox purse wholesaling for $29 and a Lost messenger costing $19. At Volcom, a roomy wrinkled PU tote with a contrast zipper gusset in the center wholesaled for $23.50. Dakine channeled Botkier with a bag with two front pockets costing $22.50.