The company celebrated the passage of Title IX Legislation in 1972 and the introduction of the first sports bra in 1977. 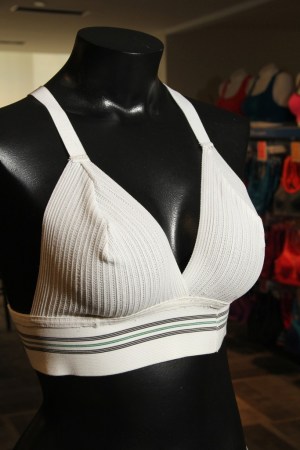 NEW YORK — Champion hosted a “Forty Years of Women in Fitness” event on Thursday that celebrated two milestones in the evolution of women’s fitness: the passage of Title IX Legislation in 1972 and the introduction of the first sports bra in 1977.

Title IX opened the door for women and girls to participate in all educational programs that receive federal funding, including sports.

The Champion Athleticwear showrooms in Manhattan were decked out with a variety of sports bra styles on mannequins as well as a prototype of the original Jogbra,which was co-created by Hinda Miller, Polly Smith and Linda Lindahl from two athletic supporters. Concepts and styles of the Jogbra have since expanded to more than 19 different Champion sports bra silhouettes designed for a range of fitness activities and levels of support and sizes. The collection is also rendered in a full palette of fashion colors.

Miller told WWD in a 1997 interview that the idea for a sports bra was created out of basic necessity:

“We were tired of holding our breasts to keep them from bouncing while we jogged,” Miller told WWD. The original Jogbra has come a long way since its inception in Burlington, Vt. The brand was acquired by Playtex Apparel in 1990, and became part of the Sara Lee stable of intimates brands in 1991, when Sara Lee bought Playtex Apparel. The brand became known as Champion Jogbra and later as Champion following the $4.5 billion Hanesbrands spin-off from the Sara Lee Intimate Apparel division of Sara Lee Corp. in 2006.

Claire Powell, general manager of Champion Athleticwear, said Champion has been supporting women “every step of the way.

“Since the introduction of the first sports bra, styles have become incredibly comfortable and dramatically more supportive. High-tech fabrics are lighter, stronger and more flexible to provide exceptional freedom while still delivering the support that women need.…Champion understands that, for most women, the sports bra is her most important piece of fitness apparel,” explained Powell.

Champion will unveil its championsportsbras.com Web site later this month, which will feature information and advice dedicated to sports bras.

Speakers at last week’s event included LaJean Lawson, a sports bra expert and consultant to Champion; Joanne Sessler, Champion’s director of design, and Olympic gold medalist Benita Fitzgerald Mosley. Mosley won the 100-meter hurdles in the 1984 Olympic Games and now serves as board chair of the Women’s Sports Foundation. She has been appointed chief of sport performance for USA Track & Field for the Summer Olympics in London.

Lawson noted that sports apparel for women has been evolving since the late 19th century.

“Women owe a great deal to bicycling.…In the 1890s, a lot of bicycling gear [apparel] was sold. It was the iPad of the time.…Bloomers were created for women to wear while bicycling. Before that, the only sports that women were allowed to participate in included horseback riding and croquet,” said Lawson.

Sessler spoke of new product during an informal fashion show, which included the Champion Sweetheart Neckline Sports Bra and the Champion Seamless Adjustable Sports Bra, both launching at retail this month. The brand also previewed new sports bra styles for late summer and early fall deliveries. “A lot has changed since the words female and athlete were not used in tandem,” quipped Sessler. “There is a big push in the sports bra world which is going through a huge revolution. High performance bras are running as fast as fashion, and we’re actually selling more prints and colors than basic black and white.”

• 62 percent of respondents said they have a passion for a sport.

• 37 percent said they played because their friends were playing.

• 28 percent played to build confidence and self esteem.

Mosely said the sports industry’s continued innovation in gear and apparel for girls and women is helping to “drive the increase in participation across sports activities at all ages.

“Title IX shows us that it wasn’t a lack of interest or participation of women in sports, but a lack of opportunity,” she said.

Regarding Mosley’s part in the Olympics in July, she said USA Track & Field will comprise the “largest team and delegation for the summer sports with 130 athletes.

“The gimmick is to get whatever the team needs.…I’ll be overseeing all of the logistics from coaching and sports medicine to funding, training opportunities and tickets for family and friends.…It’s going to be amazing. They are transforming an entire dilapidated part of London over hundreds of acres with lansdscaping, buildings and lakes. Wait till you see it. It will blow your mind,” said Mosley.