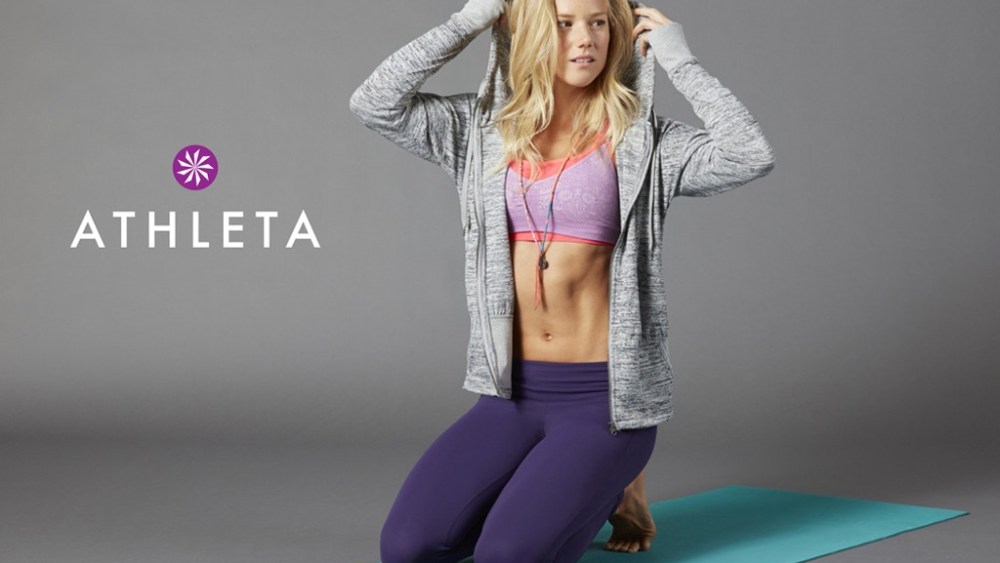 As one woman athletic apparel executive left the scene, another one is taking center stage.

Nancy Green, a 27-year veteran of Gap Inc. who was appointed general manager of Athleta in May after serving as executive adviser for Gap’s China business, and executive vice president and chief creative officer at Old Navy, has grabbed the reins of Athleta at a critical moment for the brand. As it opens stores and seeks to build momentum in the blazing athleticwear category, the timing could be just right. The moment is made all the more critical due to an unexpected change at the top for dominant market share leader Lululemon Athletica Inc. In the wake of the March recall of black Luon yoga pants costing Lululemon about $67 million, vaunted chief executive officer Christine Day announced in June she would be stepping down.

Green said she’d had her eye on Athleta for a long time before joining the brand, and that her new post appealed to her because she has a passion to build brands. “It’s a perfect time to come into a brand at this level and at the stage it is at, where you can really shape and grow a brand,” she said. Green took over as general manager of Athleta from Scott Key, who had been in the position since January 2011 and is now executive adviser for Gap’s growth, innovation and digital division. Green reports to Art Peck, president of the growth, innovation and digital division at Gap.

Green will have her share of challenges at Athleta. The expectations are great. Lululemon has set the bar high for performance in the yoga apparel sector — and in retail generally — with sales per square foot of $2,058 for fiscal year 2012, but Green isn’t afraid of creeping in on Lululemon’s turf. Asked about Day’s departure from the company she’s led for more than five years, Green said, “Everybody was surprised by the news. We have enormous respect and admiration for what Lululemon has done. We obviously wish Christine the best. This is a constantly evolving category that is growing very quickly. It represents a lot of opportunity for us for sure, but this is a big market with plenty of room for multiple competitors.”

Athleta, acquired by Gap for $148 million in 2008, when its business was dedicated to online and catalogue sales, is small compared with Lululemon in terms of revenues and store count. Last fiscal year, Gap reported that sales at Athleta and Piperlime combined increased 31 percent to $395 million, and Jefferies analyst Randal Konik estimated roughly half of those sales — or about $198 million — come from Athleta. Athleta had 35 stores as of Feb. 2. In contrast, Lululemon’s revenues rose 37 percent to $1.37 billion in fiscal year 2012, and it ended the year with 186 stores. Lululemon casts an enormous shadow over the women’s athletic apparel sector, but it certainly isn’t Athleta’s only competitor, and the likes of Lucy, Nike, Under Armour, Prana, Lorna Jane, Target’s C9 and Gaiam are all clamoring to grab the attention of shoppers.

Stores are the main story this year for Athleta, which opened its first unit in 2011. It should have about 60 doors before the year is out. “Learning from these stores is really critical. The focus is on building out the retail side of the business, and bringing this new channel in is one of the biggest priorities that we have now. It has become a fully multichannel brand,” said Green. Some upcoming locations are in Austin, Tex.; Scottsdale, Ariz.; Raleigh, N.C.; Lynnfield, Mass., and Milwaukee. Green added that Athleta can learn a lot from its catalogue business about where it has customers, and plant stores in those locations.

Konik noted that most Athleta stores are in close proximity to Lululemon stores, and while that isn’t an explicit, public strategy pursued by Athleta, it seems logical that it would follow affluent, fitness-minded shoppers to metropolitan areas where Lululemon has set up shops and go after similar traffic.

Gap has not elaborated on longer-term unit growth goals for Athleta, but Konik predicts that by 2015 Athleta will have about 100 stores — a number that could be low given Athleta’s accelerated expansion — averaging $750 per square foot in sales, and it could generate $500 million in total yearly revenues from stores, catalogue and e-commerce. He puts the market value of Athleta at between $2.5 billion and $5 billion. “While Athleta is just a small piece of the company today, we think it represents a huge opportunity for Gap Inc. With an attractive market positioning in the growing women’s active apparel category, we think Athleta is positioned to take on its biggest and most formidable competitor — Lululemon,” he wrote in the report on Athleta.

Taking on its biggest competitor means customers must be given reasons to choose Athleta over Lululemon. Lululemon has provided one reason with the Luon pant recall that has sparked concern over the quality of Lululemon merchandise, a primary brand attribute contributing to its gangbuster growth. Tracking social media buzz about Lululemon and compiling it into an index enumerating positive and negative sentiments about the brand, Lisa Joy Rosner, chief marketing officer of social intelligence firm Netbase, noticed, “There was a big a big dip in March when the recall happened. Their sentiment went from a high of 77 to a low of negative 30. Since then, it has normalized in the mid-30s. Their sentiment as a brand took a material hit from the crisis.” In the past, she added, customers might have complained about Lululemon’s lofty price points, but tolerated them because of the quality. With that quality appearing to be diminished, the brand’s expense has become a larger issue. “If I’m Athleta, the time is now to strike and the strategy is price point: [market your] similar quality at a lower point and do that to convert them [Lululemon shoppers] into your customers,” said Rosner.

In a note last month on Lululemon, Camilo Lyon, an analyst at Canaccord Genuity, wrote, “Not only is the impact to the brand from the recall expected to be negligible, we believe Lululemon benefitted from increased traffic and substitute purchases.” However, he did acknowledge that Lululemon’ competitors “at some point” could impact Lululemon’s sales growth.

Athleta’s prices are typically 10 to 15 percent below Lululemon’s. Athleta’s performance bottoms are mostly $64 to $98, while Lululemon’s are $82 to $98. Tess Roering, vice president of marketing and creative for Athleta, said, “We are a fairly premium-priced brand. Our customer tells us that she gets value for her money because our quality is so high.” Although Athleta doesn’t heavily push its relative affordability, discussing results from a survey of almost 4,600 women in the U.S., Konik pointed out, “Lower prices at Athleta or higher prices at Lululemon are the most cited factors as potential reasons a woman would consider shopping at Athleta in place of Lululemon.” Athleta has decided to stress its quality, rather than price, with a give-it-a-workout guarantee that allows customers to return merchandise any time for any reason. Lululemon has a stringent return policy that doesn’t permit returns after two weeks and only takes back items that are unused, although it did loosen the policy a bit to deal with the overly sheer pants by offering refunds and exchanges for the recalled items.

Green also emphasized that the range of Athleta’s merchandise separates it from its competition. “We have a very broad assortment that caters to both indoor and outdoor fitness lifestyle trends,” she said. “She’s [our customer is] doing multiple things. She has a very busy active life and generally does more than one sport. We create highly innovative and highly versatile products.” Roering mentioned that there’s a “fairly even split” in sales between performance and lifestyle products at Athleta, and it is working to underscore its lifestyle items that aren’t specifically for an activity in its merchandising “Let’s say in a section that might have been distinctly just yoga tops and bottoms, now you will see more wraps, and sweaters, and you’d see our mannequins outfitted in a way that depicts a yoga class look that she would wear to and from a class,” she said.

Even in the fitness apparel sector, fashion makes a difference. Color, especially, has been a mainstay at Athleta. “This is the intersection of fashion and performance, and we have to be relevant with function, fashion, performance and versatility,” said Green. Roering suggested that trends in fitness apparel follow other fashion categories. When colored denim became popular, she said, that translated into Athleta’s bottoms.

With the backing of Gap, Athleta can get the support necessary to get the word out. Athleta launched “Power to the She,” its first national marketing campaign, created by advertising agency Peterson Milla Hooks, last year and is sticking with that campaign, although updating it slightly in the spring. Athleta has stepped up its involvement with fitness events around the country, including Iron Girl, Bryant Park Yoga and Esprit de She. Like Lululemon, Athleta has complimentary classes in its stores and taps local fitness instructors to be ambassadors for the brand. “Athleta has tremendous potential in terms of marketing spend that can help propel this brand as it expands its store base,” said Konik. He concluded, “We believe it is only a matter of time before it starts taking market share from Lululemon in a meaningful way.”