The Parisian designer is relishing her renewed creative liberty after the takeover of her brand Groupe Chantelle last June. 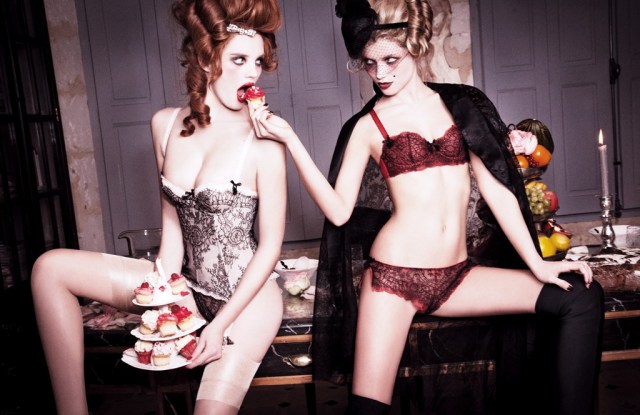 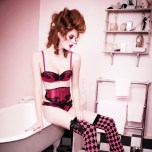 The Parisian designer is relishing her renewed creative liberty after the takeover of her brand Groupe Chantelle last June.

“I have a lot more freedom now,” said Thomass, who continues as artistic director.

Under former owner DB Apparel, a subsidiary of Sun Capital Partners Inc., Thomass explained she had “freedom, but not the means to follow it up.

“Chantelle is a family-owned French group with strong professional and technical expertise, and this allows me to create much richer collections,” said Thomass.

DB’s stable includes the Dim, Playtex, Lovable and Wonderbra brands, which are sold in mass channels in Europe.

She noted that instead of four groups she created each season for DB, she now has a broader reach under Chantelle’s aegis. As an example, her Casanova-inspired collection for fall has five luxe themes, and she will present six groups for spring 2013.

“Chantelle has a factory in France.…Around 30 percent of the production will be French,” Thomass explained. This is an important factor since she designs with a lot of upscale Leavers lace from Calais, France.

As well as being able to expand production, the partnership with Groupe Chantelle — which owns 66 percent of the Chantal Thomass brand while Thomass retains a 34 percent share — will allow the brand to grow its sales volume as well as its international presence.

Combined wholesale and retail sales in 2010 for the Chantelle Group — which has the Chantelle and Passionata brands and operates 125 Darjeeling boutiques and 58 Orcanta shops in France — are 260.3 million euros, or $345 million. The Chantal Thomass brand generates an estimated 6 million euros annually, or $8 million.

“The two brands have great commercial synergy and they are complimentary in terms of brand positioning,” said Kretz.

Kretz estimates that the Chantal Thomass operation currently does less than a quarter of its business internationally, compared to 80 percent for Chantelle.

“I don’t know whether we will arrive at that figure for Chantal Thomass, but a French designer brand has a vocation to be present internationally,” he said.

The French lingerie group’s first step will be to bring the Chantal Thomass distribution in-house for Benelux, Switzerland and Italy beginning with fall shipments.

Beyond that, Kretz said, “We’ll see. We need to understand how appropriate the brand is for the different countries we could distribute to.”