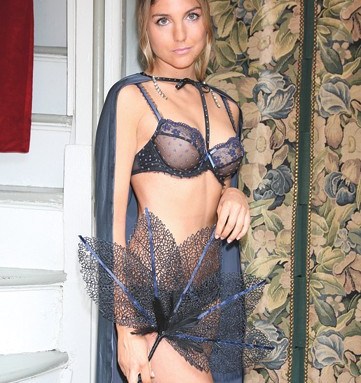 Patrice Kretz, president of the $500 million business, hosted the luncheon on May 15 for some 40 members of the media, where models strolled and posed along a balcony and stairwell wearing a number of embellished Chantelle bras and undies. Also on display were visuals of ad campaigns throughout the decades, including one highly successful ad from the Sixties that had a tag line saying “On Aimes les Seins,” or “We Love Breasts.”

Kretz is a third-generation owner of Chantelle lingerie, which traces its roots back to 1876 as a maker of elastic knits, became a corset specialist in 1902 with stretch elastic fabrics and introduced the first Chantelle bras in 1961. Kretz said the Chantelle name was inspired by either a village or a woman.

“My grandfather spent some time in a village called Chantelle, which he was very fond of,” said Kretz. “But then, he also had a mistress named Chantelle. It’s still a mystery.”

Chantelle’s operations in the U.S. began with Neiman Marcus in the late Fifties, when the brand started marketing and selling shapewear, expanding into the bra business for American women in the early Seventies. Today, Chantelle products are sold in over 700 department and specialty store doors in the U.S., with the Chantelle brand being about one out of 25 bras sold in department stores, said Sonja Winther, president of the U.S. division, Chantelle Lingerie Inc.

“Over the last 10 years [1998 to 2008], our sales have more than doubled,” said Winther, who would not give an actual sales figure. “The increase over the last five years has been about 35 percent.”

As part of a strategic growth plan, the firm acquired the 65-unit Orcanta lingerie chain from French luxury and retail group PPR in August 2006. Orcanta had annual sales in excess of $63 million. Under Chantelle’s aegis, the number of Orcanta stores was cut to 58. They continue to sell fashion lingerie brands, including Lise Charmel, Aubade, Simone Perele and Lejaby, as well as classic products from Calvin Klein Underwear.

Kretz added the company continues to retain model Stephanie Seymour in Chantelle’s multimillion-dollar ad campaign called “Beyond Beauty,” aimed to appeal to Chantelle’s core customer in the 30-to-35 age range.