Combo Looks for the Knockout With Boxing-Inspired Activewear

Activewear start-ups continue to enter the market, with the segment showing no signs of fatigue. Combo Boxing looks to carve out a slice of the category, with a nod to the sport of boxing.

Its founders think they can make a good case that there’s room for their brand, particularly with the popularity of boxing boutiques and gym classes continuing to grow.

The just-launched company will start out direct-to-consumer in its first year but will eventually look into retail partners, in the vein of businesses such as a Bandier or Carbon38. Combo Boxing is also working out a deal with boxing studio Gloveworx that hasn’t yet been finalized, which could also mean distribution there. It would make sense with the brand’s core consumer in the gyms as Combo aims to position itself as the workout and daywear label of boxers who want something more fashionable than what’s already available.

The company plans to drop new items four times annually and then gauge market reaction. Combo tapped Alex Dimitrijevic to be creative director. Dimitrijevic comes to Combo after having served as head designer at Equipment, in addition to prior stints as designer at AG and design director for Assembled Brands.

“There wasn’t anything to represent women and this fitness fanatic,” said Louis Steyn, founder of Combo’s owner Steyn Capital. “There are legacy brands that have really spoken to the traditional ways of doing boxing, but nothing to bring about a forward-thinking, attitude-based brand.” 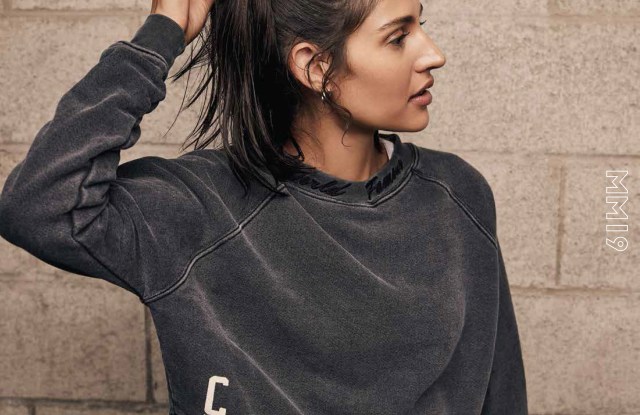 Part of what the team is banking on is Dimitrijevic’s fashion expertise, with fabrications the designer said will help the brand stand out.

“There are fabrics that we utilized that are going to be a point of reference or a nod to some of the heritage brands that have been in the space before,” he said.

There are of course the expected tights and sports bras (starting at $58) with the latter boasting some interesting twists: a center circle ring detail or a high-neck style with front cutout. There are a few more fashionable elements — as fashionable as one can get with an activewear line — with heavyweight cropped T-shirts and crewnecks in vintage washes. The entire line is made in Los Angeles-based factories and wash houses.

The company is counting on a mostly female demographic, reflective of what’s typically seen in boutique boxing classes, but Dimitrijevic said the brand is waiting to see the market response. Combo Boxing has pieces for men and women.

Collaborating with athletes will also be a key part of the strategy in the future, which will help the company remain relevant to the core.

“I think it’s really important to the brand’s identity that we stay true to the sport of boxing,” Dimitrijevic said.