The aesthetics will be in line with the brand’s underwear options that offer smooth shaping and a comfortable fit without a traditional waistband. 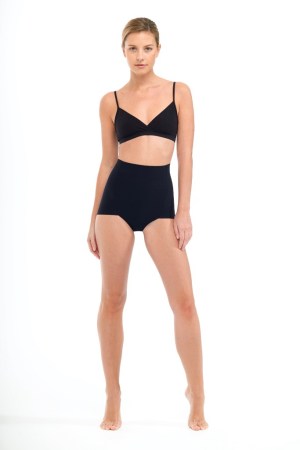 Commando is launching its first collection of shapewear for spring, called Commando Control.

The aesthetics of the allover seamless shapewear will be in line with the seven-year-old brand’s underwear options that offer smooth shaping and a comfortable fit without a traditional waistband. The introduction of shapewear follows the company’s launch of Commando hosiery in 2009, a collection of basic and fashion legwear that features a comfortable alternative to traditional control-top hose.

Commando founder Kerry O’Brien said the concept of Commando shapewear is to smooth a woman’s figure without forsaking comfort.

“Most women who have worn shapewear in the past say it starts out great but at the end of the day they can’t wait to take it off,” said O’Brien. “This is not industrial-strength shapewear. Our customers understand the Commando smoothed-not-stuffed approach to shapewear with our patented [microfiber] fabric that is raw-cut for flattering, all-day comfort…What we’re really talking about is eliminating the elastic waist which we started with our underwear and slip line and took the same approach with hosiery, because hosiery can be so uncomfortable.”

O’Brien said the elastic-free concept is based on personal experience.

“I remember one of the first things I did after I quit my corporate job in 2001 — I literally threw away all of my hosiery, which always made me miserable as the day wore on. Several years later, when I began wearing hosiery again because it was becoming fashionable, I was shocked how it was still just as uncomfortable. All the innovation in hosiery was going to shaping not comfort. That insight led to our Commando luxury legwear, which marries our patented underwear fabric to world-class luxury legs,” she said.

Commando’s hosiery business was launched at Neiman Marcus in 2009 with two styles: a signature 70-denier matte opaque tight and a pair of leggings. The legwear range has expanded to several dozen styles that are sold with other Commando products at Neiman’s, Saks Fifth Avenue, Nordstrom and Bloomingdale’s, as well as several hundred boutiques nationwide. The shapewear will also be sold at Bergdorf Goodman, Holt Renfrew, Garnet Hill catalogues and Barenecessities.com.

A first-year wholesale sales projection was not available but the shapewear could generate sales in excess of $10 million in that time, according to industry estimates. In 2009, O’Brien had projected wholesale revenues of more than $1 million for Commando’s initial two styles of hosiery.