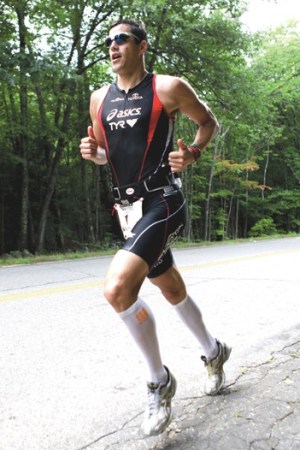 They’re not your grandmother’s support hose.

Although borne out of similar technology, compression socks have become big business for activewear companies seeking to capitalize on the surge of interest in endurance sports. The socks caught on first with triathletes, gained favor with runners and are now being targeted to other activities — everything from skiing and kayaking to ballet dancing.

Compression socks provide graduated pressure on the lower leg and foot to increase blood circulation. By keeping blood from pooling in the extremities, the socks are intended to improve oxygen delivery to muscles, speed lactic acid removal and reduce swelling, soreness and muscle fatigue. Athletes wear the socks during competition to help keep the muscles firing, as well as post-event to speed recovery.

Carolyn Gentry, a buyer for Inside-Out Sports in Cary, N.C., a large retailer of multisport products, said she has seen a “huge surge” in interest in compression products. She tested the products about two years ago, but said sales have “really blossomed this year. It started with triathletes, but is now getting more popular with runners, too.”

Although compression technology is used in a variety of products — tights, sleeves and even full suits — the socks seem to be most popular among endurance athletes. “All the feedback we’re gotten from our customers say they’re finding positive results,” Gentry said.

And they’re not cheap. Socks start at around $30 at retail and go as high as $80, she said. Although international customers will wear socks in a variety of colors including pink, blue and yellow, Gentry said most Americans opt for either black or white. “Americans are boring; they wear only black shorts, too,” she said.

Jan Kimbrell, vice president of sales for Injinji, said the graduated compression technology started in running tights, but has caught on in legwear in the last 12 months. “Anyone can benefit from the muscle support system,” she said. “But because triathletes use so many different muscle groups in the course of the events, they were the quickest to embrace the new technology.”

Injinji recently introduced the EX-Celerator Performance Compression Toesock, a five-toe-sleeve design that incorporates Lycra and Coolmax into its design for antibacterial and moisture-wicking properties. It retails for $38.

“Compression is the big story, but the toe aspect is the single biggest added benefit…[because it] engages all the digits,” Kimbrell said.

As a result, she said, the compression toe sock is projected to account for almost one-third of the company’s projected sales growth of 35 percent over the next year.

John L.A. Wilson, president and chief operating officer of the Wacoal Sports Science Corp., makers of CW-X Conditioning Wear, said sales of compression products have increased 600 percent since 2003. CW-X was launched in Japan in 1991 and came to the U.S. market in 2002.

The offerings, which include tights, socks and other compression garments, incorporate four-way stretch compression with a patented support web that works like exoskeletal kinesio taping. Wilson said the products are used during and after activity.

Tights remain the company’s most popular item, followed by sports bras, tops and socks. But socks in particular, he said, “have seen recent accelerated growth.”

Richard Verney, a partner in Sports Multiplied, which distributes Australia’s 2XU compression products in the U.S., said, “Compression has really come on strongest in the past year.” 2XU offers tights, sleeves and shorts in addition to two types of socks: recovery and race.

“We’ve really seen growth in endurance sports with the running and triathlete crowds,” Verney said. “And the cycling community is seeing the opportunity in tights.”

For the last two years, Verney said the company has had a booth at the New York City Marathon expo, and “from last year to this year, we doubled the amount of product we sold.” Socks, calf guards and tights were among the most popular offerings.

Compression can help anyone who “is in a position where they’re doing repetitive motions,” Verney said. Kayakers and outriggers, who ask their muscles to continually fire without rest, are using compression sleeves, and tennis players, who change directions abruptly on the court, have sought “muscle-containment” products so “they continue to fire and respond.”

“We also have interest from ballet dancers who are using compression tights, and motocross riders, who wear the shorts,” Verney said.

Edward Giard, vice president of licensing and accessories for Under Armour, which has built an $800 million-plus business around compression products, said the company launched the Recharge recovery sock in July, but will expand into a compression run sock ($19.99 at retail) in February, followed by an “all-sport” compression sock in July. The latter will be targeted to sports such as basketball and football and will be a heavier weight, he said.

“About a year ago, we started to see one or two elite athletes in triathlon and running road races, particularly endurance events, wearing compression socks,” Giard said. They liked the way the socks targeted and stabilized their muscles.

“The Recharge product reduces swelling and repairs damaged tissues faster,” he added. “[Compression] replaces older treatments for inflammation, where ice would have been used in the past. Compressing the muscle is far more beneficial.”

Giard said runners on the Under Armour team actually wore the Recharge recovery socks in the summer during the 197-mile Hood to Coast relay race in Oregon. And they believed it helped their performance.

“And it’s just going to get bigger,” he said, both among recreational athletes and elites, such as Under Armour’s Ironman triathlete Chris “Macca” McCormack. “We expect to have success in the market.”

Professional triathlete Andy Potts, who competed in the Olympics for the U.S. and recently has stepped up to the Ironman distance, is a proponent of the socks: “I specifically sought out the best compression race suit and the best compression socks to help me get the most out of my body,” he said. “The compression properties help flush out lactic acid buildup and allow me to push myself to my limits. Today’s technology has certainly helped me to perform at the highest level in triathlon.”