Concept of the control briefs is based on two silhouettes that are proportioned to fit a woman whose figure is apple shaped or pear shaped. 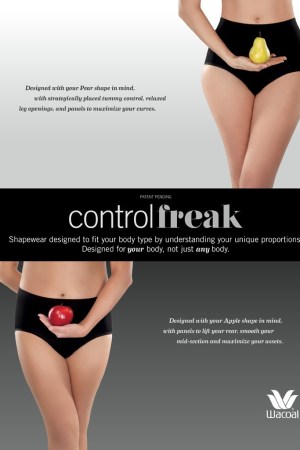 A new shaper called Control Freak by Wacoal will be launched at major stores this week.

The concept of the control briefs is based on two silhouettes that are proportioned to fit a woman whose figure is apple shaped or pear shaped.

An apple-shaped figure has a fuller waist and hips and shapewear often rolls down or pinches around the legs. The Apple Shape Brief has strategically placed panels for tummy control and panels to lift and support the derriere.

A pear shaped figure has a smaller waist but fuller hips and derriere and there often is a gap around the waistline when wearing a shaper. The Pear Shape Brief is proportionately designed for a smaller waist and is fuller at the rear and hips.

Bob Vitale, executive vice president of sales and marketing at Wacoal America, said, “We think Control Freak is a great name and the launch will be supported by a national ad campaign in April as well as a marketing video for retailers.” As reported, Vitale will take on the role of president and co-chief executive officer April 1.

The ad campaign, titled “Control Freak, Designed for Your Body, Not Just Any Body,” features images of the two shapers on two body types, each showing a woman holding an apple or a pear in front of the shaper. Both styles feature a knit-in fruit logo on the inside of the garment to help a customer make a selection.

“I think this will be as big a launch as the iPant program was last year,” said Vitale. Over 150,000 units of the iPant, a seamless shaper brief microencapsulated with caffeine to help reduce cellulite, were shipped in 2011.

The rights to the pending patent as well as the Control Freak name were acquired from intimate apparel designer Tina Wilson.