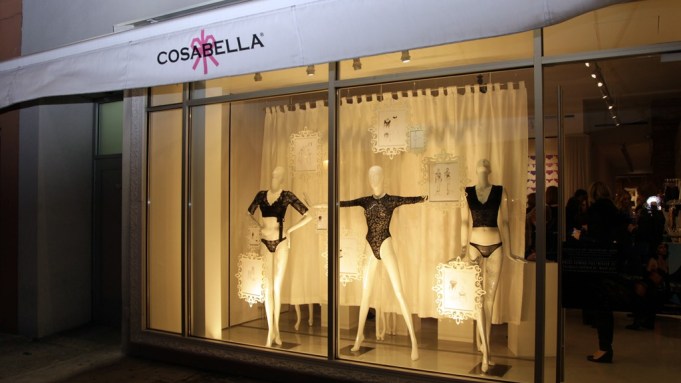 Lingerie specialist Cosabella recently kicked off festivities for its 30th anniversary with a party at the Cosabella flagship and showrooms in downtown Manhattan.

The media event drew more than 75 editors and stylists who viewed vintage intimates, loungewear, sleepwear, shapewear and swimwear dating back to the Miami-based company’s inception in 1983. Italian husband-and-wife team Ugo and Valeria Campello started the company in their garage, and the firm has since expanded into a second-generation family business led by children Silvia and Guido Campello.

Cosabella — meaning “beautiful thing” in Italian — made its first mark on the industry with bodysuits in the mid-Eighties and, soon after, introduced a simple, mesh thong that eliminated panty lines. With products bearing the Made in Italy stamp, Cosabella has become known for its lingerie in bright signature colors.

The family-owned company opened 527 new shops-in-shop at J.C. Penney across the U.S. this year with an exclusive diffusion brand called “Cosabella Amore.” The secondary brand is part of a national television campaign by Penney’s.

Guido Campello, vice president of innovation, sales and marketing at Cosabella, said the Cosabella Amore shops are on track at Penney’s despite major executive changes this month, which reportedly include a redo of brands and merchandising.

“We’re still booking and going forward, and we’ve done all of our allocation plans. We have all of our market week appointments [in May] set up,” said Campello.

Campello described the Cosabella Amore brand for Penney’s as “being on trend” for mainstream customers.

“Cosabella Amore is an introduction into Cosabella’s color, comfort and layering philosophy. Cosabella Amore will benefit from constant evolution in terms of trend and color for the J.C. Penney customer…We talked about the brand being on trend while Cosabella is trendsetting, ahead of the trend,” explained Campello. “Cosabella Amore is relatable to a mass marketing customer by interpreting trends in a way they can incorporate into their everyday wardrobe. The ultimate goal is for the J.C. Penney customer to realize all of the alternatives available to them in this product category and to grow into the Cosabella brand if and when they are ready.”

He added that other collaborations have garnered media exposure for the Cosabella brand.

The upcoming fall 2013 collection is inspired by vintage styling and the brand’s partnership with the hit Starz TV series “Magic City,” a nostalgic nod to 1959 fashion and the glam world of Miami Beach in its heyday. A collaboration with one of Hollywood’s most renowned costume designers, Betsy Heimann — of “Pulp Fiction” and “Jerry Maguire” fame — is among this year’s partnerships, which also include a one-of-a-kind line of lingerie inspired by the “Betsy Bra,” a bra that Heimann created for celebrities on the red carpet. Made of smooth microfiber, the “Betsy Bra” is a cropped bustier designed to smooth the arms with three-quarter sleeves and a fitted under-bust band that slims the torso and gives a sexy lift to the bustline.

Cosabella’s first designer venture in 2007 was with New York-based evening wear designer Carmen Marc Valvo. The luxury lingerie collection was the brand’s first to appear on the runways of New York Fashion Week. In 2008, Cosabella created the licensed “Sex and the City” collection to indulge the global following of the popular TV show. In 2010, the company created the Cosabella for J. Crew collection, which was sold nationwide at J. Crew stores.

Regarding further anniversary plans this year, Campello said he recently hosted events at Saks Fifth Avenue in Atlanta and Houston.

“The year is young. More events and parties are planned for the rest of 2013,” he said.