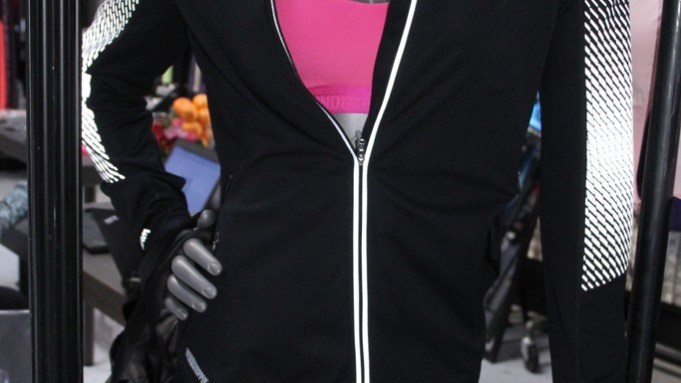 The exhibition, which caters to the women’s contemporary market and featured 1,400 exhibitors, launched a new section called Blue, which included designs from the fall collections of premium denim firms. Brands in the 900-square-foot installation included Current/Elliott, Hudson, Strom, Siwy, Mavi and AG. Other special areas were TMRW of advanced contemporary designers, and an activewear section featuring lines such as Under Armour, Vimmia and Prismsport.

Randi Siegal, owner of Rapunzel’s Closet, a women’s specialty store, and Lil Rapunzel’s children’s store in Palm Beach, said she saw a lot of colorblocking, especially  in the heathered gray, charcoal, black and ivory palettes. That was evident at Sundry, Splendid and Velvet. She also liked the fur vests and leather trim styles at vendors such as Joie, Ella Moss and Vince. “There was a big presence of two-fers, which refer to a sweater over a button-down shirt. We bought a few versions from Joie and Vince,” she said. Overall, Siegal said the key colors at Coterie were grays, warm whites, black and a pop of fuchsia. Snake and leopard prints were also a hit.  Another big trend at the show was the military influence with cargo pants, which was evident at Velvet, and camo jeans, which she bought at Hudson. She also liked the camp print T-shirts and sweaters at Sundry and Monrow.

Leo & Sage launched its collection at Coterie, which is 75 percent knitwear. “We’re focusing on novelty knitwear, and basics with a twist,” said Pauline Nakios, who is also the owner of Lilla P, which has been in business for 17 years. She said that Lilla P tops off in the low $200s, and Leo & Sage will encompass things she can’t do with Lilla P.

Leo & Sage is produced primarily in China, and the collection wholesales from $85 to $325. Seventy percent is cashmere and 30 percent is wool. First deliveries are slated for July.

Another new vendor at the show was Van Elslander Cashmere, a cashmere leisure line for women, men and infants founded by Kim Van Elslander. The collection, which wholesales from $75 to $1,200, also includes fur pieces with cashmere sleeves. The average wholesale price range is $200 to $500. The collection is produced in Italy and China. She noted that the collection is based in both Detroit, where she lives, and New York. Styles include hoodies, shrugs, jogging pants,  turtlenecks, cape dresses and batwing tunic dresses. The palette is neutral and includes gray, black and brown with splashes of color.

Elle McComb, owner of four Pure Barre stores in South Tampa, St. Petersburg, Bradenton and Clearwater, Fla., was pleased with what she was seeing at Coterie. “I think the activewear is fabulous and is well-organized and easy” to navigate, she said. She liked Koral, Splits59, Alo Yoga and Vimmia at the show. “What I like is that it’s going more from the barre to the bar, you can go from working out to a luncheon meeting or to the grocery store. You throw on a sweater and you can go out for the night,” she said.

Jonathan Schwartz, cofounder of Splits59 — an activewear company which was situated in a different area in the show near Theory — was having a good show. His team was working with Intermix, which bought the line for spring for its stores, as well as online, and was placing new orders. “Function is paramount for us,” said Schwartz, citing the collection’s performance attributes, threads and fabrics. Fifty  percent of the Splits59 collection is made in Los Angeles and 50 percent overseas. The collection is sold in stores such as Nordstrom and Equinox, as well as Pure Barre.

Uri Minkoff, chief executive officer of Rebecca Minkoff, had two busy booths — one for the brand’s new activewear line and another for its ready-to-wear and handbag collections. The activewear includes jackets, bras, Windbreakers, leggings, muscle T-shirts and sweatshirts for both the gym and the street.

Minkoff said that he’s selling double the amount of rtw in his own stores than he thought they would. The company recently launched knitwear and was showing such items as three-piece knit dressing, cardigans, a cashmere poncho and bohemian looks. The collection is sold at Bloomingdale’s, Saks Fifth Avenue, Neiman Marcus, Nordstrom and Shopbop.com. Minkoff said their specialty store business has increased by 40 percent.

Lisa Shaller-Goldberg, owner of Minnie Rose, said she broke holiday at the show, which is a month early. She also launched Black Label, which offers sexy tops to go out in at night.

Bailey 44 was having success with colored vegan leather in pencil skirts and sleeveless turtlenecks; suede layering shells; turtlenecks with layered chain necklaces; chunky rib-knit sweaters, and ponchos in plaid sweater knits, as well as classic wrap coats in double-faced fabrics, according to Ruthy Emsallem-Grode, founder of the contemporary brand.

Morgan Ostrowski, owner of Bottega in Holmes Beach, Fla., said she was looking for “things that pop out.”

“A lot of booths have a lot of the same stuff, and I’m looking for something that I would buy, my mom would buy and my sister would want to buy.” She owns a salon and spa that has a boutique inside. She liked what she saw at Glamorous and found some good denim there. “I also loved Olive + Oak,” she said. Since their store is in Florida, she was on the lookout for lighter-weight knits and sweaters.

Jordan Douglas, owner of The Shirt Shop in Louisville, Ky., said, “I’m looking for new lines. We usually go to Atlanta, and New York has so many more lines available. I’m looking for things that people in our area don’t have.” Among the lines she was buying were Twenty, Britt Ryan and Amanda Uprichard. “Hutch also was fabulous. There were lots of tweeds and jacquards, as well as dresses,” she said.