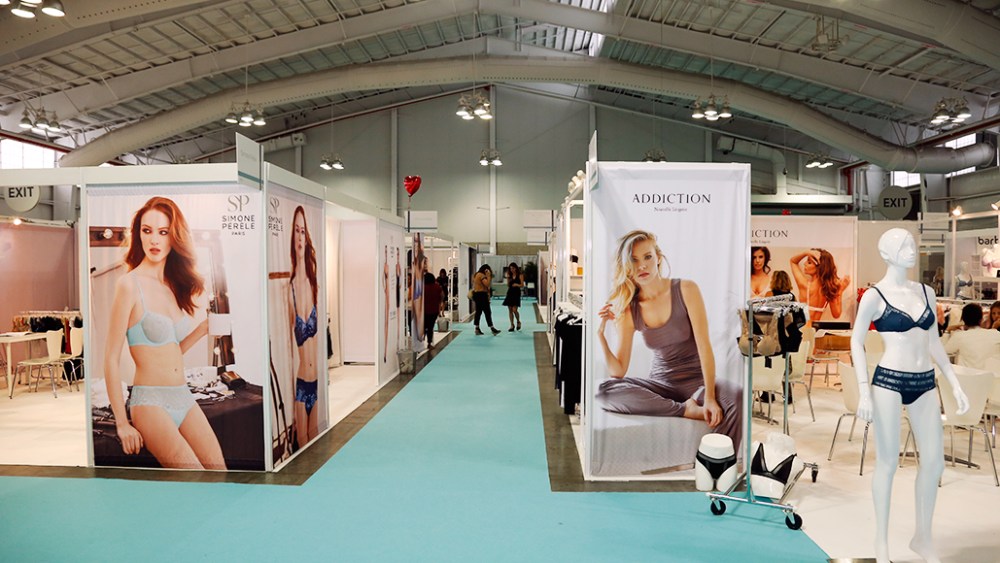 Innerwear brands and retailers at the CurveNY intimate-apparel trade show, which took place this week at the Jacob K. Javits Center in New York, are trying to sell newness during a difficult time at retail.

The term “newness” is often used at trade shows to describe subtle updates to trending items, but the intimate-apparel and sleepwear industry is focused on innovation and producing multifunctional products that speak to customers. They are also interested in growing their collections to appeal to multiple consumers.

“If we create exciting product, we will draw in the customer and make her want to buy,” said Jessica Pfister, vice president at Le Mystère, who added that innerwear today must have both beauty and brains.

Le Mystère is hoping to offer that with their new bra called The Perfect 10, which can be worn three ways — as a lace bralette with an underwire, as a strapless bra with a plunging neckline or as a lace bra. It retails for $79. The bra’s straps can be adjusted in 10 different ways. The brand also previewed a new bodysuit with stationary straps and an open back — Pfister said the silhouette continues to do well at retail — and a shine and sheer unlined demi bra that’s priced at $66.

According to Rachel Wentworth and Meredith Amenkhienan, co-owners of Forty Winks, a lingerie boutique located near Harvard University, their customers are looking for minimal pieces that serve multiple purposes.

“Things are trimming down because the economy isn’t booming, and there’s a trend in consumption that speaks to minimalism,” said Amenkhienan. “They don’t want things that are too frilly or gimmicky,” added Wentworth. “They want to feel like they are in their own skin.”

Along with minimalism, the active and ath-leisure category remains important for the market, specifically within the fuller-cup brands, which are also extending their size ranges.

Curvy Couture, which caters to fuller cups, introduced its first sports-bra styles. The Zip Fit, an underwire sports bra with a zip-front closure, and the Ultimate Fit, an underwire sports bra. They are both made with moisture-wicking fabric and breathable mesh and are priced around $65. The brand has also showcased a low-center strapless bra, as well as expanded its Dream Lift bra to go up to a 46 band size.

Similarly, Elila is broadening its offering for full-figure consumers. The brand previewed A-cup bras for fuller sizes and have extended their soft-cup bra to an N cup. They’ve also introduced a new sports bra that features a cut-and-sew bra placed under a mesh overlay and a new clasp that allows women to adjust their bras from the front.

Kay-Lin Richardson, director of sales at Panache, told WWD that buyers were excited about their new core options, extended sizes and fashion prints and colors. They were also drawn to Panache’s spacer T-shirt bra, Cari, which now comes in core colors champagne and black for spring 2017.

“Buyers continued to look to some of the previous seasons’ bestsellers, but they were excited to see updates,” said Richardson. “The general mood of the show was upbeat, and most retailers reported that after a tougher holiday and winter season, the spring — and especially the summer — business has been robust.”

Calvin Klein, which recently featured model Bella Hadid in its fall 2016 campaign, is attempting to capitalize on its popular modern cotton sports bra with a seamless collection that features the logo.

“We’ve been having a moment in logo,” said Amanda Goldstein, division manager of specialty stores at PVH Corp. “So now we are just building on that for the Millennial consumer.”

Calvin Klein also previewed other pieces that are popular for that demographic: bodysuits, unlined bralettes and modern cotton lounge pants with a logo band.

Sleepwear brand Derek Rose, which is known for its classic silk pajamas made in England, is offering more leisure pieces, including a cashmere sweater integrated with cooling silver thread and a hoodie that includes headphone holders. Additionally, they previewed a new shortie pajama set, and a new cami-and-short set, which will be sold together for the first time.

Andriette Flemings, manager at the Upper West Side location of lingerie boutique Only Hearts, said she’s noticed a rise in bridal and bridal-shower purchases.

Loulette Lingerie, which started as a bridal-dress brand before introducing lingerie, is attempting to capitalize on that with its brand, which is made in Brooklyn. The first collection includes bodysuits, silk robes, high-waist underwear and long-line bras that feature fabric and pattern mixing.

“There aren’t a lot of lingerie brands that are made in Brooklyn,” said creative director LaTimberly Johnson. “So often brides want pieces to wear under their gown that are equally as pretty and sexy but not too sexy.”