The manufacturer is attempting to differentiate its sleep and lounge product and launching new brands that focus on performance. 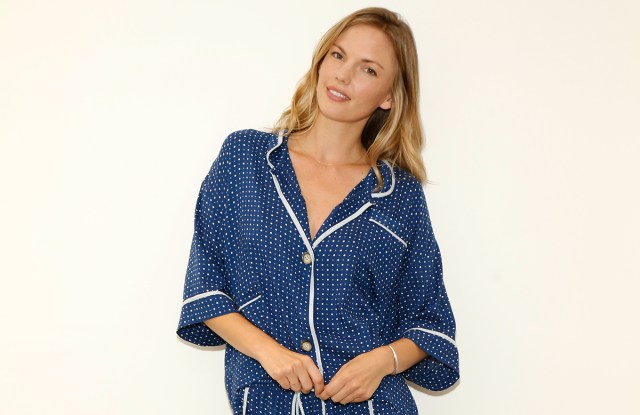 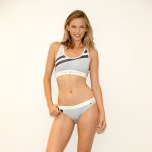 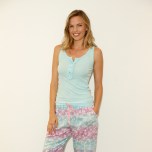 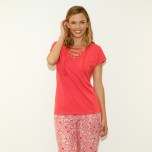 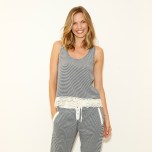 Delta Galil is in growth mode.

Along with recently acquiring contemporary brands Seven For All Mankind, Splendid and Ella Moss from VF Corp. for $120 million and investing in new factories in Vietnam, the manufacturing company is also building up its extensive licensing roster for sleep, intimate apparel and lounge and shifting the assortments for its existing brands.

“We really are living through a sea change,” said Victoria Vandagriff, president of D2 Brands. “The world has changed and the woman’s needs for sleepwear are changing. It all ties back to the ath-leisure and activewear trends we’re seeing.”

Delta Galil, which recently hired Aliza Surut as the design director for D2 Women’s, signed a license deal for Juicy Couture’s intimate apparel and sleep collections, which launched exclusively at Bloomingdale’s earlier this year and have been picked up by Lord and Taylor for fall along with Amazon and Dillard’s for spring.

The collection is print- and logo-driven but in a more subtle way than previous Juicy pieces. Silhouettes include rompers and classic pajama sets decorated with the signature Juicy charm. At its peak, the California-based brand did well with packaged underwear sets, which Vandagriff said Delta Galil will reintroduce as the line expands.

For the Tommy Hilfiger sleep, lounge and intimate apparel license, which Delta has held since 2008, Vandagriff said the design team is focused less on targeting the Millennial customer and more on catering to a broader age range.

“I would say we were probably a little too young at retail and we sort of had to rebalance the scales,” Vandagriff told WWD. “The Millennial shopper isn’t going to the intimate apparel section at department stores.”

This shift translated to easy-to-wear pieces with less complicated necklines. West Coast and Venice Beach references inspired the spring collection, which features vintage floral prints, tie-dye patterns and on-trend crochet and lace-up details. The design team has also expanded its fabric selections to include cotton modal, woven rayon and rayon spandex and is doubling down on its replenishment and loungewear business.

“The loungewear part of our business is definitely growing,” said Vandagriff. “She wants multiuse product.”

Delta Galil has taken the customer’s new needs into consideration for the KN Karen Neuburger line, which the company purchased in 2011.

Now the line is more modern and features less traditional floral prints and more contemporary motifs and silhouettes including maxidresses that can be worn for sleep and lounge in addition to tunics and separates, which Vandagriff said are doing well for the brand. Plus is another growth piece for the brand and according to Vandagriff it’s a focus across the entire business.

For men, Paul Cronin, the vice president and general merchandising manager for D2 Men’s, said their needs for sleep and lounge are also changing.

“The men’s customer has raised the bar of expectation on performance underwear, be it wicking, cooling or moisture management,” Cronin told WWD. “Innovation has never been a more critical element to deliver the product story, drive sell-in and superior sell-through performance at retail.”

Delta Galil picked up the license for Columbia Sportswear’s sock business three years ago, but now is expanding the relationship to include men’s and women’s underwear — a first for the brand — that launches this month.

“Everything in this line has to be technology based,” said Cronin, who added that 65 percent of the business will be dedicated to men’s and 35 percent will cover women’s.

The assortment includes performance underwear for men and women made with fabrics such as four-way stretch cotton and mesh, in addition to women’s sports bras — a category Cronin said is a big focus for Delta Galil.

According to Cronin, the outdoor and active component is helping them differentiate the product at retail.

Cronin said in terms of product, the design team has honed in on Lacoste’s heritage and introduced a three-pack of Supima cotton T-shirts — Lacoste produces pima cotton for its apparel line — along with cotton pique underwear that come in 11 different colors for spring. They are trying to stand out on the floor with packaging customized for Lacoste fixtures and color.

“The biggest challenge is the underwear business isn’t growing, so if you are going to pick up market share you are going to have to take it from another brand that isn’t coming up with newness.”