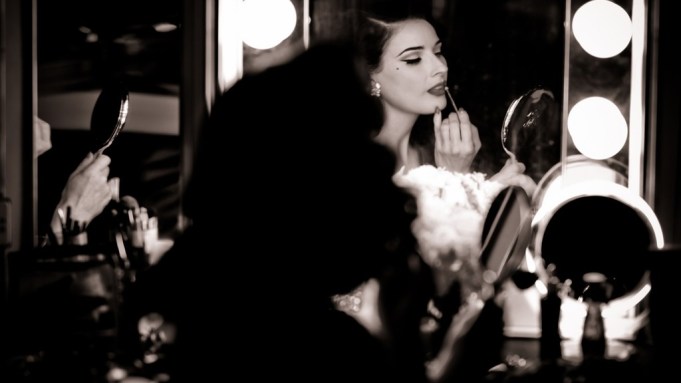 Dita Von Teese has been a lingerie junkie since she was a tween growing up in Rochester, Mich.

Despite her love of lingerie, the small-town girl turned burlesque queen is a self-described “late bloomer” who was disenchanted with the utilitarian look of her first bra.

“I’ve collected lingerie since I was a little girl. But I wasn’t able to wear a bra until I was older, in the Eighties, and I was quite disappointed with my first bra — an ugly training bra,” said Von Teese. “It became a reminder in my thought process, and I later saved up to buy a favorite item — a robin’s-egg-blue silk garter belt, which I still treasure and keep. I didn’t equate it with seduction, but merely that I was a woman and thought of it as a little bit of luxury.”

That was the beginning of Von Teese’s obsession with lingerie, particularly upscale vintage pieces from the 1930s, 1940s and 1950s, which make up the lion’s share of her vast collection.

“One of the things I fell in love with was vintage lingerie, because I couldn’t afford to buy anything at the beginning,” she reflected.

Von Teese has been designing lingerie based on her personal tastes for the past two years. Now her designs will be sold on hsn.com beginning April 23. As reported, the HSN deal will be the largest retail partnership for Von Teese, who will also launch two fragrances on HSN Television: Rouge and a signature Dita Von Teese scent.

“The lingerie collection [for HSN] has universal appeal, because I love lingerie and I have tons and tons of it…I am a collector of beautiful lingerie, but my goal is to have this lingerie for HSN pass as being one of those things that I collect. I think I have definitely accomplished that and have even asked friends ‘Which of these panties is the most expensive?’ A lot chose the $25 panty for HSN,” said Von Teese. “But I want to make it clear I am not designing for HSN — I’ve designed these pieces before, and I design the line and create the fragrance. I feel I am speaking to authentic, real women…I’m not the type to sit down and say ‘Give me the [design] brief.’”

Regarding the creation of her fragrance, Von Teese credited a former French boyfriend as giving her sobering advice.

“I was walking down the street in Paris with him, and he asked what perfume do I wear?…It was one of those old perfumes from long ago…Once I told him, he said, ‘Oh, my mother wears that.’ A friend later told me, ‘Either get rid of the boyfriend or the perfume’…It took a year for me to develop my fragrance,” she said.

Von Teese described her signature scent as “sultry, not a little girlish scent with vanilla or other gourmet ingredients.“What is the scent of a femme fatale? I wanted the scent to be more womanly, like something Marlene Dietrich would wear,” she explained.

She suggested women anoint their ankles and knees with the rouge fragrance.

“That’s where I wear fragrance — it’s where the people are as they look up to watch me dance.”