The LA-based cosmetic surgeon served up controversy during the catwalk show featuring his lingerie line at the most recent Cape Town Fashion Week. 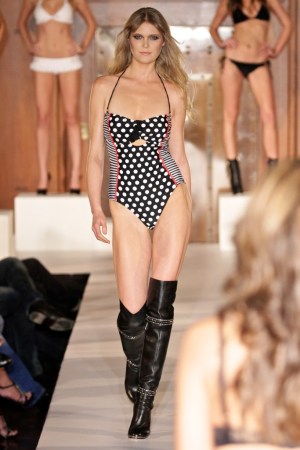 JOHANNESBURG — He claimed South African women had been engaged in a “sexy struggle” for too long and said that he was “bringing sexy back” to South Africa.

Robert Rey, the Los Angeles-based cosmetic surgeon better known as Dr. 90210 on the E network, served up controversy during the catwalk show featuring his lingerie line at the most recent Cape Town Fashion Week.

Amid a bevy C-cup bras and corsets, several members of the audience were angry and offended at the implication that South African women were not sexy. Moreover, female empowerment is an important issue here and the country has one of the highest rates of gender equality in the world when it comes to employment figures.

Rey later said his comments were taken out of context.

The LingeREY by House of Rey show was the hottest ticket in town, with local celebrities and fashionistas jostling for prime front-row seats along with the media and visitors such as Kimora Lee. In the last year, the flamboyant Rey has visited South Africa twice to launch his other wellness and lifestyle products, which include his books, weight loss system and his skin care range, Sensual Solutions. Rey is a household name in South Africa and he has a huge following in the country.

Although Rey frontlines the LingeREY range of intimate apparel, shapewear and swimwear, it is a collaborative effort with his wife, Hayley, and Blush Lingerie.

Hayley Rey walked the runway clad only in a bra and jeans with her daughter in tow. She later changed into a short floral frock and took her bows with her husband, who wore black leather pants and a black shirt unbuttoned down to the waist. The couple paused to exchange a passionate kiss in front of the crowd, stirring even more controversy.

LingeREY will be available in selected department stores throughout South Africa in the next few months, said his South African partner, Reza Mia, who is also a cosmetic surgeon.

Mia said, “We share the same vision of a healthy lifestyle, and that was the starting point for our partnership, which now extends to representing his clothing line locally.”

Local retails prices for LingeREY will range between $47 and $207.