Exclusive line of daywear and undies debuts at Ann Taylor stores and anntaylor.com this week. 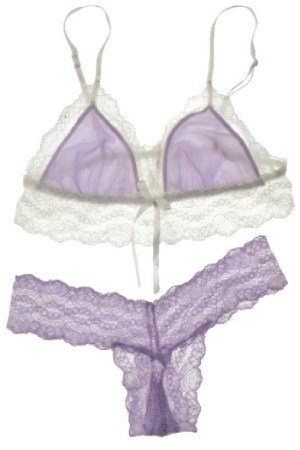 World Threads Inc. is launching an exclusive line of daywear and undies called Bluebird by Eberjey at Ann Taylor stores and anntaylor.com this week.

“We saw a need at the specialty store level for a line of everyday panties that are cute yet reasonably priced,” said Mariela Rovito, president and co-founder of the Miami-based lingerie company, which produces the upscale Eberjey label. “The Bluebird girl cares about her underpinnings, but doesn’t want to spend too much.”

The initial line of Bluebird by Eberjey will feature three groups that will include two bralets, one cami and nine panty styles: Amaya, a flirty set in lightweight nylon mesh and lace, which will retail for $16 to $28; Sienna, a group for everyday wear of nylon and Lycra spandex power net, will sell at $18 to $26, and Isabella, an offering trimmed with galloon lace, will be priced from $16 to $36.

Rovito said the collection will be sold at 30 select test stores, as well as the Ann Taylor Web site.

“If it works out well, they will roll it out to additional stores,” she said. “Ann Taylor will be the exclusive launch retailer for the first season, and we will expand to other retailers for fall.”

Rovito added she has received a lot of recent feedback from merchants requesting lower priced items that can be sold in multiples. Wholesale sales the first full year are projected at $1 million, she said.

“This is the first time we are doing a retailer exclusive and the first time Ann Taylor is getting into lingerie,” Rovito said. “We are category exclusive. What we are trying to do with Bluebird is gear different styles to different body types. As an example, one group will feature a boy-cut thong, as well as a lace brief. It will be interesting to see which styles will retail well in the [Ann Taylor] environment. The line is aimed at the existing Ann Taylor customer, but that customer is changing a bit. They are aiming at a different direction and looking at a younger customer.”

Regarding the concept of the line, Ali Mejia, co-founder and creative director, said, “Fit is still the number-one priority, but comfort and cuteness are tied for second.”

The line will be available in 10 colors in sizes S, M and L.