Emily Ratajkowski Is the Face of Amore & Sorvete 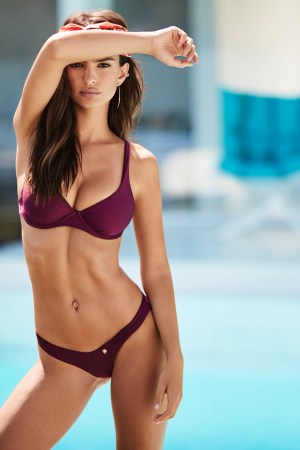 The 25-year-old actress and model, who gained attention for her figure and her controversial take on feminism, is the first face of Australian swimwear brand Amore & Sorvete, which was started in 2009 by Bridgette Gale when she was 21.

Gale became familiar with Ratajkowski when she appeared in Sports Illustrated’s 2015 Swimsuit issue wearing an Amore & Sorvete bikini. “Obviously she has an amazing figure,” Gale said. “But I also liked that she’s a strong, independent woman because that’s the base of my brand.”

Ratajkowski, who also recently appeared in advertisements for Express and jewelry brand Jacquie Aiche, is no stranger to wearing a bikini. The San Diego native told WWD she grew up frequenting the beach and was drawn to Amore & Sorvete’s pieces. “You don’t have to worry about your nipple falling out if you are surfing,” said Ratajkowski, who, ironically, celebrates nudity but admits she’s particular about her swimwear.

“I think that anything can look bad on anybody and that’s why we have fittings,” she said. “I always like my waist to be accentuated and I like a Brazilian cut because sometimes full coverage can be unflattering no matter what size you are.”