Qeep Up is a conscious brand devoted to ocean conservation.

Maggie Q is a woman on a mission.

The actress and activist is passionate about conserving everything related to the oceans and she’s bringing that message to the forefront through the launch of a new activewear collection. Called Qeep Up (pronounced Keep Up), the line of women’s leggings, shorts, tanks, sports bras, bodysuits, T-shirts, swimwear and half zips are all created from recycled ocean waste.

The line is made in the U.S. from yarn created from plastics collected on the Eastern Seaboard and milled in California. The collection is manufactured in ethical factories in Los Angeles and San Fernando, Calif., “that pay a living wage,” she said. “It’s fully transparent from top to bottom, because it matters. You can’t make a recycled garment in a factory where people aren’t being paid.”

Even the packaging is designed to degrade and will be gone within a year.

“Our packaging, the bag, the mailer are 100 percent biodegradable so you don’t have to think,” she said. “You throw it away and it will go away. I’m not doing hang tags, I’m heat pressing everything you need to know about a garment on the garment. Because you just cut the tag off and throw it away. I just don’t want more trash.”

In an interview in a penthouse suite at 1 Hotel Central Park in Manhattan, Q said she has been a champion of the environment for more than two decades and Qeep Up was “born out of my love for conservation.

“I didn’t set out to be a designer or have a line just to have a line, but I’ve been an ocean conservationist for 20 years,” she said. “I was born and raised in Hawaii so my first love is the ocean. I’ve been an activist and fought for marine mammals for many years and wanted to do something that created a larger platform to talk about our oceans and the problems we’re having with plastics and overfishing. This line is my gateway to that.”

Q said she hesitates to use the word “sustainable” since it tends to be overused and instead says she “set out to create a company that is completely conscious.”

She’s had the idea for the collection for more than 10 years but waited until she thought the technology had been perfected. “If I’m going to do it, I’m going to go all the way and create a line that is of equivalent quality of that you would find in a non-recycled Nike or Lululemon,” she said. “When I first started researching recycled yarns, it was about 10 years ago and I didn’t think the yarns were there yet. Because if you do it and you don’t do it well, then you turn people off to the entire thing and they’ll never buy another recycled garment.” 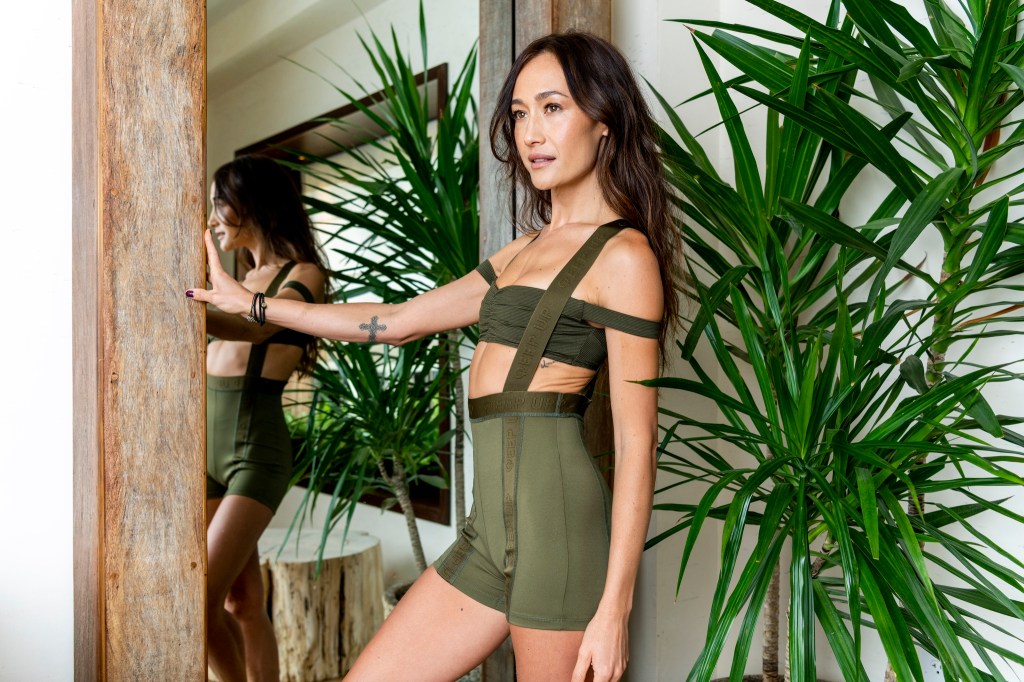 Maggie Q in a look from her collection.  Clint Spalding/WWD

The line will be offered on the brand’s e-commerce site starting Monday and will retail slightly higher than Lululemon, she said, with leggings selling for $125, biker shorts for $108, a bodysuit for $165, T-shirts for $65 and sports bras for $82. Q’s favorite piece, a “workout overall” sells for $118.

Q said she’s the sole investor in Qeep Up because, “I thought that’s how you do things,” she said with a laugh. “I didn’t have the wisdom or the education to know any better because I’ve never built a business.”

She did work with a brand manager who helped her understand the nuances of the apparel industry and has since brought on other “strong, motivated women who care about sustainability. But every cent of this is funded on my own, I don’t have one investor. I know I need that, but I think if you really love something, you’ll find a way to do it. I’ve done everything backwards but my hope is to get my message out there and get people to like it and go from there.”

The collection offers looks in solids as well as Qeep Up’s signature Ocean Tie-Dye Project print. The print, created by an artist in Australia, is “meant to give you a perspective of what the world looked like from a bird’s-eye view.” Proceeds from the sale of the products made with the print will be donated to an ocean conservation group.

Q, who grew up as an athlete and was on the cross country, track and swim teams, said the collection is broken down into three subsections: high speed for hardcore athletes, low speed for Pilates or yoga, and no speed for the loungewear she hopes to create next.

“My global domination plan is that I want to go into Qeep Up Kid and Qeep Up Dog,” she said with a hearty laugh. “Sustainability should be a lifestyle. I want people to adopt it so it becomes a big part of their lives and how they make their decisions. Change the thinking is the whole point.”

Q, who first came to fame as an action movie star in Asia, made her first movie in the U.S. in 2005. She’s already finished two films this year: Robert Schwatrzman’s “The Argument” as well as Sony’s reboot of “Fantasy Island” opposite Lucy Hale and Michael Pena, which is scheduled to be released in February. Her next project will be a film with Ben Kingsley that she’ll start filming in Puerto Rico in October.

“This brand has been sandwiched in between these projects,” she said. “I’ve never been busier in my life, but I’ve never been happier. Because when you have passion, it doesn’t feel like work.”

She also manages to keep herself in tip-top shape. She gets up “when other people are still sleeping” every morning and takes her two rescue dogs out for exercise, whether that’s running the hills in L.A. or hiking for miles in the woods at her second home in suburban New York.

But these days, it’s all about Qeep Up. The brand is not only a play on her name but also a description of her life.

“I feel that way all the time, whether it’s politics or conservation or my dogs or my job,” she said. “I have to keep up all the time. It’s my major challenge. I’m motivated to do it, it’s just hard.”

But Q has never shied away from hard work. Ever since Jackie Chan’s management team discovered her when she was going to school in Hawaii and lured her to Hong Kong to appear in films, she’s been working non-stop.

It was in Hong Kong too that her professional name was coined. The Chinese couldn’t pronounce her last name — Quigley — so called her Maggie Q. It stuck and she decided to keep it when her acting career took off here.