Designer and frequent traveler C.Z. Falconer is launching a namesake resort collection of loungewear to wardrobe women from plane seats to poolside chaises. 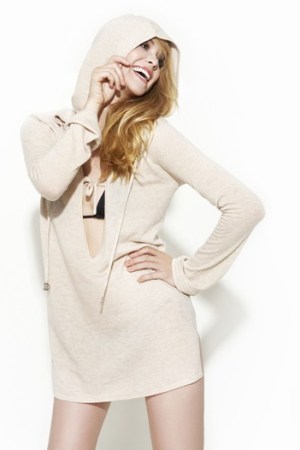 “I saw a market for attainable, sexy, luxury loungewear,” said Los Angeles-based Falconer, a veteran of the fashion industry for 10 years, during which time she did product development at Kate Spade and was a product designer at Polo Ralph Lauren. “A lot of companies are doing a couple of loungewear pieces here and there, but I wanted to create a whole brand based on that concept.”

The 25-piece collection, which hit the Fred Segal Couture store on Saturday, is tightly edited to contain “everything you would need for a long weekend,” said Falconer. The collection wholesales from $45 to $235. Standouts include a hooded poncho for $188 wholesale, a zippered sweater for $188 and leggings for $111.

Cashmere is a key material for the launch, and the principal colors are black, cream, beige and fuchsia. Although additional materials, colors and prints will augment future collections, Falconer emphasized cashmere would be a staple of the line.

Falconer’s target audience is the 25- to 45-year-old jet-setter, who the designer imagines has closets stocked with designer brands such as Diane von Furstenberg, Roberto Cavalli and Eres intimates and swimwear. “My customer is definitely international. She is very fashion-savvy, but she is looking for something comfortable but still glamorous to wear,” she explained.

By the end of 2010, Falconer hopes to roll out the line to 40 to 50 boutiques, where it could be cross-merchandised with loungewear and lingerie as well as knitwear and be presented as featured pieces on gift-giving displays. She expects retail sales to ring in between $750,000 and $1 million the first full calendar year.

Wonnie Park, owner of Fred Segal Couture, said she appreciates the line is not overly complicated. “It’s really fresh in that it seems to be able to capture the right price point and the right amount of fashion. It’s simple elegant pieces, and it will hang really well with our ready-to-wear designers as well,” said Park.