Fifties Style a Leader at SIL 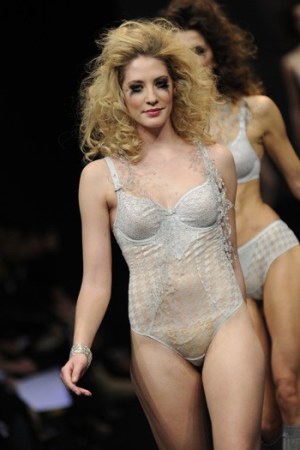 European textile and apparel sales in France grew 0.9 percent in 2010, and further growth is anticipated this year, said Eurovet project manager Cécile Vivier, who cited figures from the Institut Français de Mode. As a result, brands embraced the post-recessionary period with more adventurous silhouettes and colors than in recent seasons for fall at the fair.

The optimistic outlook did not bolster visitor attendance at the Salon fair and Interfiliere Textiles venue, which was 2.7 percent lower than last year’s edition, totaling 29,134 visitors.

But Vivier noted, “We saw a lot more decision-makers. For example, Nordstrom, which only sent their private label buyer last year, but this year the buyer for finished products also came.”

In design terms, a number of brands moved away from classic black-and-white and displayed varying hues of blue, green and gray, as well as lots of red tones. Passionata, a young contemporary brand, staged Fifties-themed fashion shows with the models wearing retro aprons, horn-rimmed glasses, red lipstick and a cupcake backdrop. Another French brand, Aubade, which also drew inspiration from the Fifties, saw global sales in 2010 rise by 10 percent with the U.S. business generating a 35 percent increase, according to the brand’s director, Claire Masson.

Sonja Winther, president of Chantelle North America and U.K., said the range for Chantelle, which featured a retro cone bra in stitched lace with high-waisted briefs, was inspired by the late actress Romy Schneider.

“That whole hourglass Fifties silhouette is giving an enhanced interest in getting a bra fitting. In 2005, Oprah Winfrey told American women about the importance of being fitted, and that has been a huge boost to service-oriented brands,” said Winther. “Any product with feminine details has been popular. Shapewear has also been a huge trend. The American market has evolved toward more femininity. We have introduced the consumer to a different approach to lingerie, and convinced her that it is much more than just a functional garment.”

Maison Close, sold in upscale boutiques like La Petite Coquette in New York, offers a collection of sexy, layerable pieces and accessories. The brand is diversifying its color offering away from classic black and into white, powder pink and gray.

Harriet Wilkes, owner of Barbarella in Worcester, England, said she was after special brands like Maison Close in order to differentiate her boutique from department stores.

Shapewear in particular was a strong category with key launches such as Wacoal’s introduction of Beauty Secret Slim, which the brand claims combats cellulite with microencapsulated caffeine.

Empreinte introduced what it described as a technological breakthrough — exclusive molded bra cups of Guipure lace for the Diva line the company developed over the past 18 months, said marketing and creative director Magalie Lagathu. Suggested retail for the bra will be 100 euros, or $136, and a bodysuit will sell for 250 euros, or $341. In the U.S., Empreinte is sold at Intimacy and Rigby & Peller in the U.K.

“The reaction from buyers has been very enthusiastic,” said brand and marketing manager Emilie Kaufmann. In France, distribution will be limited to multibrand stores and high-end department store Le Bon Marché, said Kaufmann. Details about international distribution were not available. Suggested retail will be 70 to 75 euros for bras, or $95 to $102, and 35 to 45 euros for briefs, or $48 to $61.

The spring 2012 season was featured at the Interfiliere textiles and lace fair with a trend exhibit that showcased a feminine, romantic statement in pastel shades.

However, Valerie Dhellemmes, style coordinator for French mass market apparel chain La Halle, said she was not impressed with the colors on show, saying, “There is no real positioning [in colors].…But I found the fabrics and the prints more interesting.”

In these troubled times, when raw materials prices are continuing their upward curve, companies like France’s D&D, a first-time exhibitor, offered new ways of enhancing quality and value to fabrics through high-tech laser cutting and a wide range of trims.

“We work with Nina Ricci, Gap and Cacharel in ready-to-wear, but we are trying to position ourselves in the lingerie market, for which our main client for the moment is Erès,” said sales representative Baptiste Vallet.