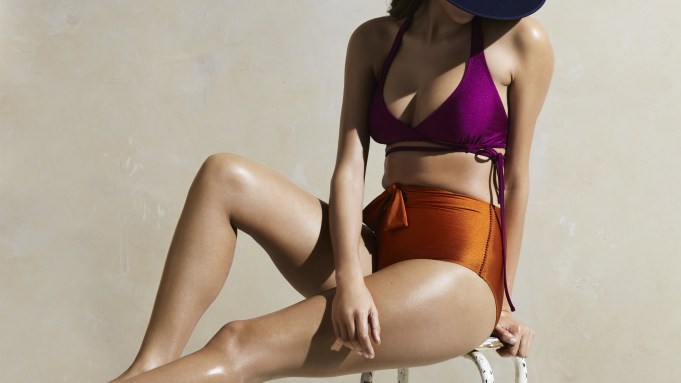 Lydia Maurer, the former creative director at Paco Rabanne, wanted to create a swimwear line that flattered women of varying sizes, so she created Phylyda, which she will show at the Capsule New York trade show, which runs from Saturday through Monday.

The collection, which will ship to stores in November, includes Fifties-inspired separates that are meant to be mixed and matched. Bottoms range from size 2 to 18, and tops, which include an underwire, go up to bra size 42F. Maurer has focused on construction details that flatter the body, including laser-cut edges and bonded seams that eliminate bulges, and a signature clasp that can be adjusted for a more custom fit. Maurer has also integrated SPF 50 on all of the fabrics and some of the pieces are lined in fabric that has been treated with retinol and vitamin E. The line retails from around $280 to $440.

According to Maurer, who released a limited-edition, all-black capsule called Anneaux Noirs in July, she thought that her brand messaging would draw in mostly plus-size customers, but she’s found that women of all sizes are buying from the line, which was picked up by German luxury department store KaDeWe. She’s hoping to increase U.S. distribution for summer. The line will be available to purchase on Phylyda’s e-commerce site in October, and will ship to stores mid-November.

Maurer recently partnered with British model Charli Howard and body-positive blogger Clémentine Desseaux on the All Woman Project campaign, which aims to foster size diversity within the fashion industry. The models in the campaign wear Phylyda swimwear.

“This is exactly what Phylyda stands for,” said Maurer. “We had the same vision and I’m so happy I was able to support them on their new venture.”