Called Harriett, the collection of upscale silks, satins and laces is named after the wife of Frederick’s founder, Frederick Mellinger. 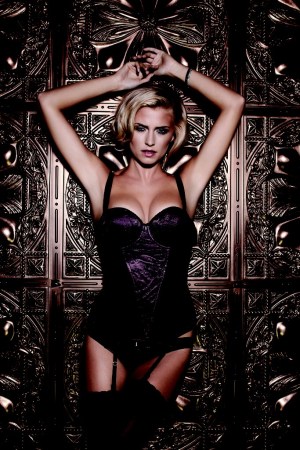 Frederick’s of Hollywood is revamping its image with a new luxury brand of intimates and sleepwear called Harriett.

The collection of upscale silks, satins and laces is named after the wife of the founder of Frederick’s, Frederick Mellinger, whose risqué black lingerie and luxe looks from the Silver Screen in the Forties were designed for his longtime muse, Harriett. She later became creative director of Frederick’s and approved every design and innovation.

“Harriett is an ode to the love story behind the legend,” said McCourt. “It started when Frederick went overseas to France where he was inspired by French women in their naughty black lingerie. During that time he was writing love letters to Harriett and describing his design ideas with drawings….He wanted to design lingerie that was more aspirational for American women. Harriett wrote him back and said, ‘If you can make me look like that, you will become a millionaire.’”

The Harriett collection will be sold exclusively online on its own dedicated site harriett.com and at the Frederick’s of Hollywood flagship. The launch will be supported by digital advertising, a social media campaign and paid online search initiatives.

The fall collection will retail from $29 for a thong to $159 for a corset.

McCourt said the company’s entry into “accessible luxury” is part of a strategy to grow awareness of the iconic brand to a wider consumer base.

“We took a look at what was going on in the business and looked at opportunities to increase exposure to new customers and reposition the brand’s image to a broader population,” said McCourt. “We are doing a dedicated site for the Harriett collection because our customers have demonstrated they will pay higher prices if the silhouette and quality is to her liking. She loves luxurious silks and lace….In our data base, we can overlay the demographic information and we can see a certain number of consumers have a propensity to spend higher dollars. This new line is an acquisition strategy to engage new customers.”

Retail sales of luxury merchandise continues to be strong despite an uncertain economy and Frederick’s officials believe the time is right to introduce a luxury brand.

“We saw that brands like Burberry and Coach were still doing well [in a tough economy], and Prada was doing extremely well with significant growth. That demographic of consumers still has a strong appetite for luxury and fashion,” she explained.

She added that the Harriett collection will be expanded to include ready-to-wear and high-end accessories including handbags for the holiday selling season.

Meanwhile, Frederick’s has another project on its plate: A redo of its legendary catalogue.

The catalogue, which McCourt calls a “brandzine” because of the mailer’s magazine-like look, will feature modern, updated images aimed at younger, contemporary consumers as well as “VIP” customers. It will debut this week and will be part of 5.5 million catalogues mailed four times a year.

“We believe the new imagery is more contemporary, aspirational, elegant and engaging to the consumer, and the models have more fashion appeal,” said McCourt.

Two advertisers will be featured in the launch catalogue: Virgin wines and Brazilian Blowout, a hair care brand.