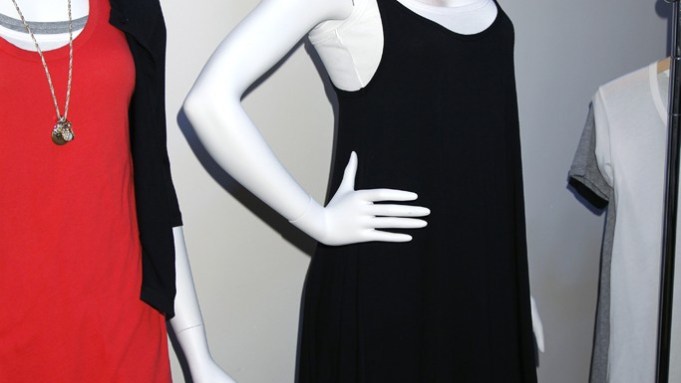 Fruit of the Loom is bolstering its basics business with premium product at new channels of distribution, including Bloomingdale’s and Old Navy.

The 150-year-old brand of classic underwear and casualwear for men, women and children, which is owned by Berkshire Hathaway Inc. and generates estimated annual wholesale revenues in excess of $2 billion, has traditionally been a key resource of basic, commodity goods for mass merchants such as Wal-Mart.

But last May, the company added some show-business bling to its name by partnering with celebrity stylist Leslie Fremar to create a line of T-shirts and contemporary layering pieces of 100 percent premium cotton called the Leslie Fremar for Fruit of the Loom Collection, a Bloomingdale’s exclusive. Since then, assortments in the line have been expanded as well as the number of Bloomingdale’s doors, which have grown from 11 test stores to 34 units, said John Shivel, senior vice president of FTL’s marketing, advertising and corporate communications.

Shivel said the upscale collection for spring — which retails from $22 for a variety of tops to $40 and $48 for cardigans, $36 and $38 for leggings, and $50 for an A-line tank dress — has been well received by consumers who shop at the YES contemporary sportswear department at Bloomingdale’s.

“We started out with a capsule collection of three key [T-shirt] styles at 11 Bloomingdale’s doors in May. By September, distribution was rolled out to all stores, excluding outlets,” said Shivel.

Charla Bobbitt, communications manager for FTL, said reaction to the collection has been strong because of its quality, contemporary styling and attention to detail.

“There is a delicate French seam down the back of the T-shirts and the arm holes are cut higher for coverage in some of the styles that women like to wear as workout tops….The tops are meant to be layered and the necklines are graded down from the racer-back, the tank and the scoop neck styles….There’s also a pop of color with color blocking for spring,” said Bobbitt.

Shivel said an in-store event hosted by Fremar is being planned at the Bloomingdale’s flagship in early June. He added that FTL also plans to do “celebrity seeding” — gifting of key items or the entire collection to celebrities. Fremar has styled a number of stars including Julianne Moore, Reese Witherspoon, Charlize Theron, Jennifer Connelly and Maggie Gyllenhaal.

“We are also working with a publicist to create some buzz for the collection and we’ll be doing a viral campaign,” added Shivel.

Meanwhile, Kelly Thompson, vice president of advertising and brand management at FTL, said the launch of the men’s “Softest Collection” at Old Navy earlier this year has been successful.

“The Old Navy customer is a little younger and goes to Old Navy for value and style. We’ll be doing women’s next,” said Thompson. A launch date has not been finalized for the women’s line.

All of the tag-free items in the packaged Softest Collection of boxers, boxer briefs and T-shirts in premium cotton are designed exclusively for Old Navy. Detailing includes a plush waistband, four-piece construction for boxers and a generous length for the T-shirts.

Suggested retail is $13.50 for a pack of three crew-neck T-shirts or three boxers, and $13.50 for a four-pack of briefs or boxer briefs.