Underwear firm Ginch Gonch to roll out 64 styles for women. 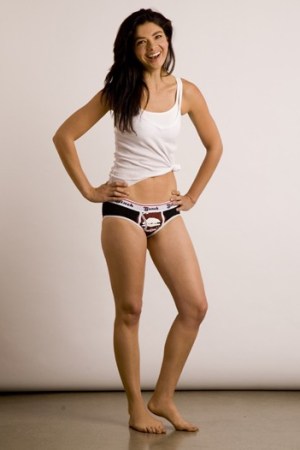 The five-year-old firm began as a maker of men’s cotton briefs and boxers featuring vivid and graphic prints not unlike the kind found on children’s underwear. In May, Ginch Gonch will roll out its largest offering yet of women’s styles in its Boys & Toys line, some 64 styles of thongs, briefs, long johns and tiny underpants.

“We realized that not only were women huge purchasers of the men’s product, but they loved it so much that they were wearing their boyfriends’ boxer shorts,” said Rebecca Wilkinson, media coordinator at Ginch Gonch.

The company began testing the women’s market last year with a small offering, sold online, of styles featuring patterns such as dump trucks, miniature hot dogs and tiny roosters. The response was positive enough to justify a full-scale rollout.

“Because of the boyish themes, we thought it would be so unlike anything out there,” Wilkinson said. “The playfulness adds a fun and different appeal to it.”

The men’s line is available in stores such as Bloomingdale’s and Macy’s in the U.S. and Selfridges in the U.K. Wilkinson said she anticipated the same majors would carry the women’s collection. The line wholesales for $11 to $14.

“Intuitively, everyone would say that it’s a scary time to launch a new product,” she said. “But because it’s so different, we have managed to capture a certain niche, which is still growing.”

Ginch Gonch will be adding to its women’s offerings this summer with a line of tops and T-shirts. Wilkinson also said a women’s swimwear collection would bow in the near future.