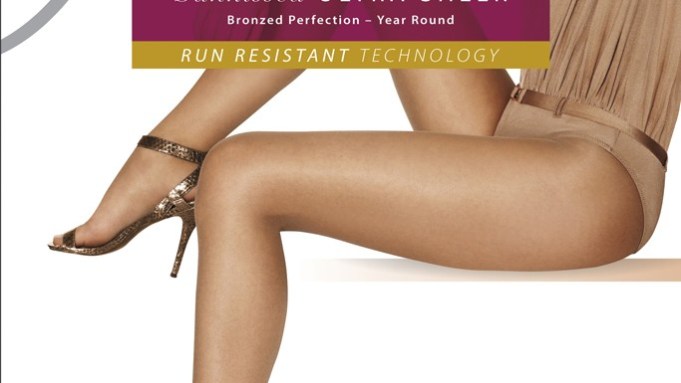 Hanes Hosiery is giving a face-lift to its Silk Reflections brand.

The redo — which will encompass a total rehaul of the brand in the next several months — is kicking off with the launch of the Sunkissed Ultra Sheer collection with run-resistant protection by Silk Reflections. The new line will be rendered in five body tones that will be marketed as “Bronze Perfection.” The bronze shades have a subtle shimmer and were selected to address women of all colors in five shades: Deep, medium, light, tan and nude. Point-of-sale materials include a color selector that’s shaped like an artists’s palette, with which consumers can match their skin tones.

Creating lingerie and hosiery in a variety of universal skin tones has been attempted by a number of companies over the past few decades, but Angela Hawkins, general manager of hosiery brands at Hanesbrands Inc., believes the consumer mind-set is ready for a “cosmetic” approach to legwear.

“The bronzing concept in skin care and cosmetics has been very popular, and we now see it happening in hosiery,” explained Hawkins.

The Sunkissed line is comprised of two styles: a control-top and a smoothing illusion thong. Suggested retail will be $11.

The launch in January at department stores nationwide will be supported by advertising campaigns on Facebook and other social-media platforms, said Hawkins.

“We also see shimmer and shine continuing into spring as well as back seams. Geometric check patterns have really had great reception,” said Moxham.

Suggested retail for fashion tights by Silk Reflections is $10.

Regarding the overall hosiery business at Hanes, Hawkins noted, “We find sheers are stable and there’s still growth in tights and leggings, because dresses and skirts are still very popular,” said Hawkins.

Legwear is a $1 billion industry, according to The NPD Group Inc./Consumer Tracking Service.