Heidi Klum Gets Intimate at Macy’s

Heidi Klum is getting cozier with Macy’s with a line of contemporary bras and panties, called Heidi by Heidi Klum, being sold exclusively at the store. 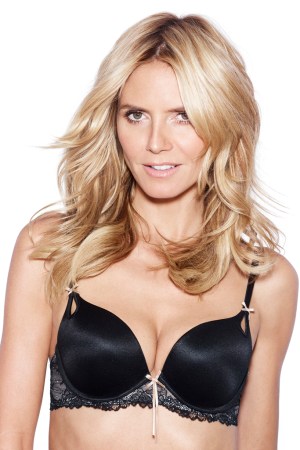 It’s not like Heidi Klum needs to sex up her image.

Nonetheless, the model and former Victoria’s Secret Angel is getting cozier with Macy’s with a line of contemporary bras and panties, called Heidi by Heidi Klum, being sold exclusively at the store. Klum said her new intimates — which she models in upcoming ads — give women “the perfect boost” and “the most natural shape.”

Klum is already part of Macy’s marketing, as the face of the 30th anniversary campaign this year for the retailer’s International Concepts private brand.

Klum’s Macy’s line has four bra and four panty styles, priced between $12 and $44. Bra styles include the “Heidi Boost” for a deep plunge and super soft gel pads for maximum lift; the “Heidi Fit” sporty demi-cut bra with a customized uplift pad and supple foam pads; the “Heidi Smooth” bra, which is lightly lined with memory foam pads to provide “gentle lift” and be invisible underneath clothing, and the “Heidi Natural” for a sexier, low cut bra that’s unlined to eliminate bulk for a natural lift.

In panties, Klum said the bikini and hipster styles provide more coverage, while the cheeky and thong styles are sexier options.

The collection consists of 30 pieces, ranging in size from 32A to 38DD and small to extra large. It launched last month at about 100 Macy’s stores and on macys.com. “The collection feels fresh and feminine with beautiful lace details,” said Kimberly Hugonnet, Macy’s vice president and fashion director for center core.