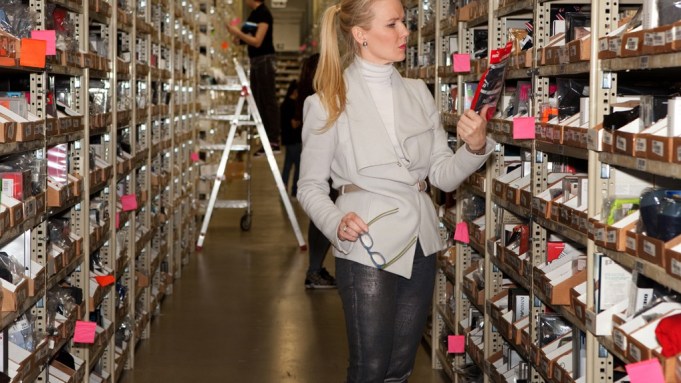 DALLAS — Merchandise is randomly displayed in the warehouse for Herroom.com for a specific reason: It easier for shoppers to spot a pink Vassarette bra among a backdrop of shoulder pads and undies, rather than with an array of look-alike Vassarette packages.

There’s little else scattershot at this fast-growing business that went live in the e-commerce stone age of March 2000. The intimates Web site and its brother site, Hisroom.com, are generating $50 million in annual revenues and sales on track to double by 2015, said the e-tailer’s owner and founder Tomima Edmark.

A game-changer introduced last summer was The Bra Finder, an application that helps women determine which brands, styles and sizes will best fit their body types. It doubled the site’s conversion rate for the first 60,000 women who went through the process, said Edmark.

“The feedback was phenomenal. People said it was life changing,” she said.

Now, Edmark is developing a panty finder she hopes will be ready for fourth-quarter business.

Stocking 170,000 sku’s from more than 310 brands that range from everyday bras by Playtex to luxe lingerie by La Perla, the e-commerce site has long relied on unique applications that facilitate the online shopping experience and selection of foundations.

One of Edmark’s first strategies was to show side and back views of bras as well as the front of the garment. She now holds a trademark business method patent for multiple views of articles for sale in online.

“We are looking into licensing this patent,” she noted.

The patent also covers another innovation called Try It Under, which let’s the viewer see how a bra is likely to appear underneath different necklines.

“I strive for unique content and really listen to the customer…I read more than 10 percent of customer service that comes through. That’s where you learn what they are looking for and from that I come up with better features for the site,” explained Edmark.

Bras comprise more than 60 percent of company sales, led by D cups and larger cup sizes by brands such as Eveden, Fantasie, Freya, Goddess, Elomi and Huit. The fastest-growing categories are swimwear styles with built-in, cup-sized bras, as well as boy-shorts. Top-selling names in the men’s area include  Under Armour and branded activewear and “sexy” briefs by Gregg, Homme and C-In2.

Orders average $95 and everything shipped is wrapped in colored tissue paper — purple for Herroom and royal blue for Hisroom — so people “feel it’s a gift.”

Edmark made a fortune in the Nineties by inventing the Topsy Tail pony tail accessory that she has since sold. Ironically, the little plastic device that she still uses to style her hair was part of her motivation for starting the e-commerce sites.

“I wanted to prove I wasn’t a one-hit wonder, and I thought I could make [buying lingerie] a better experience online than in the stores,” said Edmark, noting that it’s important that women be educated on how to buy underwear for themselves.

“It bothers me that there is this attitude you can’t figure out your own bra size, that you have to go in and have some bra fitter tell you what your bra size is,” she asserted. “I just think women are smarter than this. We can tell if something fits or not.”

Edmark said she regularly “test drives” bra fitters in stores to see what size they come up with, and it’s rarely the one she prefers.

“People really have a different sense of how they want things to fit,” she pointed out. “There is no one right answer.”