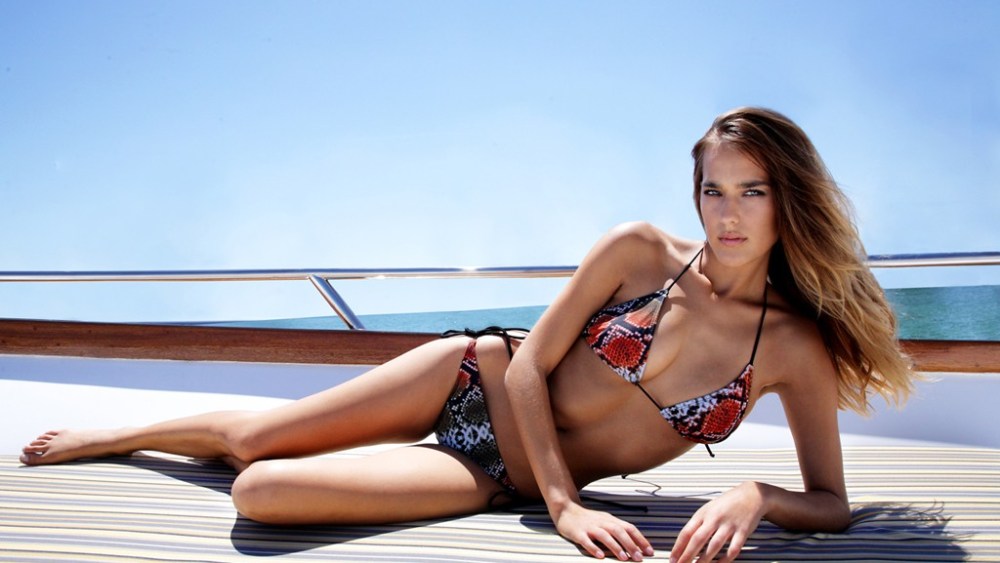 The cocktails and caftans will be flowing at Miami swim week, July 19 to 24.

Between the Swimwear Association of Florida’s 30th-anniversary SwimShow in the Miami Beach Convention Center and the maxed-out Mercedes-Benz Fashion Week Swim at the Raleigh, the industry will have a packed six days, but time for some R&R, too.

“Demand exceeded time,” said Christina Neault, executive producer for IMG Fashion, of the decision to cut off the shows at 32 designers, its largest presentation in the event’s eight-year history. “We squeezed in more through two group shows with four collections each and press previews in the hotel’s penthouse.”

Lisa Blue opens Thursday night with Chinese dragons dancing down the runway, while Vitamin A and ANK return after hiatuses. Agua Bendita, Cote D’Or, Suboo, Rose by Vanessa Jean and Eclairee premiere among an equal mix of domestic and international lines. Touting trends by Jantzen and Trina Turk, among others, IMG’s Sunday pool party offers a rare consumer promotion during the trade-only market.

Salon Allure, an annual boutique trade show for swimwear, resortwear and fabric at the W South Beach, is dipping its toe in the public pool, too. Its inaugural, consumer-friendly sample sale over the weekend benefits Miami Children’s Hospital. Style Works, an accessory showcase with 15 to 20 collections like London-based KOZA travel bags and Ancient Greek Sandals, also launches.

“It’s a hybrid between pure exhibition and showroom space for brands to be part of Miami swim week, minus the major financial commitment,” said Salon Allure event producer Rick Fatzinger.

Venue and vendors expand to two floors and 71 brands focusing on either their domestic or overall debuts, and surf-inspired contemporary designers like Aquarius, Lolli and Made by Dawn. Many will be modeled on a pool runway during Friday’s opening bash.

On Sunday night following its fashion presentation at the convention center, SwimShow 2013 gets its Chaka Khan on by paying homage to its Eighties’ origins with a makeshift disco blasting the decade’s hits as celebrity impersonators, as well as a few real personalities, make the rounds. Trend seminars by Stylesight and Pantone welcome the public, an outreach that’s gaining importance for its social media buzz factor. This year, there are 100 new vendors — the largest amount for the segment, according to SAF executive director Judy Stein. In total, there will be 2,500 exhibitors of swimwear, lingerie, resortwear and beach accessories.

“We’re using every square inch of the floor,” she said, turning away latecomers after selling out in record time. “It proves swim’s resilience as an affordable indulgence that speaks summer and the category’s embracement of change.”

One newcomer is Paul Frank, which launches a juniors collection with a dozen swimsuits and four cover-ups, including a terry cloth skort romper, tank dress and boardshorts featuring the famous monkey’s mug featured on prints or embellishments. Pieces retail from $20 to $35.

“Affordable pricing falls in line with the brand’s silliness and enables the customer to buy without pressure,” said Nina Leong, senior vice president of licensing for Saban Brands, which acquired the 15-year-old star simian in 2010. “Swim was actually one of its best-performing categories in the Nineties, so we don’t know why the former owner discontinued it.”

Los Angeles-based A.Ché also introduces juniors with Mandy by A.Ché’s 16 reversible separates that wholesale for $21, plus a handful of maillots and cover-ups in a brighter palette including neon, rainbow-hued ditsy florals and brush-stroke stripes.

“It won’t be as constructed as our women’s line,” said designer and president Amanda Ché, who’s known for underwires and fully padded cups that expand to F for 2013.

Construction has become a main priority. For its second swimwear season, Natori continues its successful, eight-tier cup sizing system perfected by its signature bras, but has scaled back the initial offering to bestsellers, such as triangle and push-up plunge tops. To celebrate the brand’s 35th anniversary, designer Josie Natori looks no further than her Philippine roots for colors and prints based on the country’s rainforests and famous body-art festival.

Gottex adds GTX, a youthful collection specializing in bikini tops for cup sizes A-F. Creative director Molly Grad reported pieces incorporate the same fine details, like prints engineered to the body, but at a lower price point. Within the main collection’s four subbrands, New Vision is fleshed out for 2013.

“Customers are responding to fashion-forward swimwear more than ever,” said Grad, who touches on unexpected color combinations, chunky jewels woven into suits and the Olympics.

“Living in London, it was hard to ignore them,” she said.

Having come to SwimShow for two of its three decades, Paula Morse, vice president of sales and merchandising for Miraclesuit and Magicsuit, noted that swim and the control niche, which it pioneered, have evolved together in the increased demand for innovation and fashion.

“The customer doesn’t want to disappear in a black, brown or eggplant suit anymore. No matter her size, she wants all the trends, like prints on white grounds and vintage-inspired denim rompers,” she said.

For 2013, the firm expands its sports division with comfortable straps that stay in place and antimicrobial, chlorine-resistant fabrics.

“We’re always strategizing about how we can tap into a new demographic,” said Morse, “whether the water aerobics crowd or the young customer.”