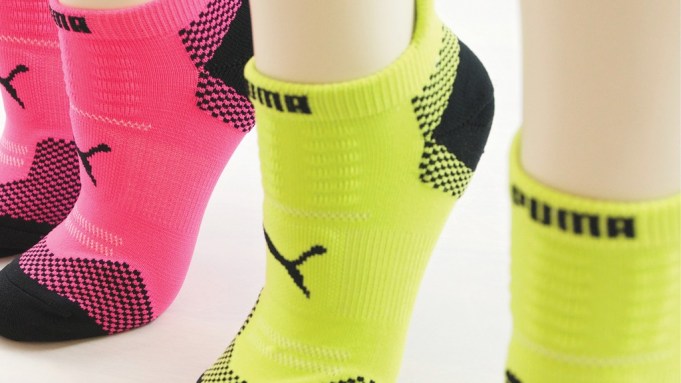 Legwear has been riding a hot streak. But how long will the momentum continue?

The aha moment began after Kate Middleton’s engagement to Prince William in the fall of 2010, when the world began watching every fashion item the soon-to-be-royal wore, including legwear. Since then, her choices for all occasions have included matte and shiny nude-tone sheer hosiery, as well as basic opaque tights.

Another key factor has been the growing appetite for trendy legwear by a new generation of consumers — led mainly by Millennials who embraced the bare-leg trend for the past decade — and continue to make legwear a must-have accessory for their wardrobes.

Formerly a seasonal fall staple, legwear has become a year-round accessory that a number of vendors describe as cosmetics for the leg. Over the past two years, the demand for fashionable legs has created a halo effect in all categories ranging from shimmery sheers and opaque tights in a wide range of fashion colors, to sportswear-inspired leggings and semisheer styles in a plethora of patterns, textures and novelty yarns. The phenomenon has been so influential that even sportswear and denim brands introduced a category called jeggings.

Socks — once considered a basic commodity or a whimsical gift item — have also stepped out with a palette of trendy fashion colors and prints, artisanal hand-dyed treatments and an array of high-tech applications that address different lifestyles.

But while the demand for legwear continues to be strong, a closer look by The NPD Group Inc./Consumer Tracking Service indicates the momentum could be reaching a peak in certain areas. In the 12 months ended February 2013, total dollar legwear sales slid 5.3 percent to $1 billion, compared with an 8.4 percent increase in the same year-ago period. Retail sales of tights were up 0.5 percent, totaling $564 million, while sheer hosiery declined 11.1 percent to $496.8 million.

The majority of vendors, though, are upbeat, saying they foresee legwear business continuing to build based on sales increases that range from 10 percent to 45 percent or more. They believe an abundance of fresh, new ideas, as well as the acceptance of legwear as a seasonless and affordable fashion accessory, will continue to drive business.

“I think the consumer is voting to support newness. It seems to be a continuing business because of an interest in legwear throughout the seasons,” said Wolkowitz. “It used to be a balance of 80 percent for fall and then everything would drop off for spring. Now it’s about a 60-40 balance.”

Wolkowitz said the magic formula for the Hot Sox brand is a combination of hand-dyed treatments such as tie-dyes and distressed effects; luxury yarns, including lightweight cashmere blends, and unique patterns. He singled out a best-selling group of socks from The Famous Artists Series that features high-tech knit-in images of famous paintings including the Mona Lisa and The Scream.

“That’s where we get our velocity in terms of newness,” he said.

Lisa Cavallini, president of Mostly Tights LLC, the U.S. unit of Florence-based Emilio Cavallini, singled out a combination of fashion with “fun” colors, prints and patterns as top ideas this spring.

“There is a lot going on and tights and sheer hosiery are definitely having a big moment. Department stores as well as Internet sales are doing well, and more people from areas outside of major cities are buying from us online,” noted Cavallini.

Best-selling styles at Emilio Cavallini include sheers with tonal or contrasting patterns as well as colorful semisheer patterns on tights and socks.

“There’s definitely a return to more sheer patterns like our sheer 20-denier tights with a zigzag pattern on the side. Another top trend for us is stripes, whether it’s ankle socks, striped crochet tights or a fishnet and striped combination. Surprisingly, we are doing very well with horizontal stripes, which a lot of women say makes their legs look bigger….Fall 2013 will continue with a lot of sheerness and illusion patterns,” said Cavallini.

“The big news is leggings continue to perform and solid black and white is totally happening. The new news for us in socks is color. The colorful sock has been trending in the men’s market for several seasons, and it’s starting to trend for women’s in solid colors,” explained Townsend. “Socks are fun again, and it looks to me like it’s being worn as an accessory. Editorials in fashion magazines have been a strong influence.”

Rita Polidori O’Brien, vice president of marketing and licensing at United Legwear Co. LLC, said a lot of action has been taking place with athletic socks by Puma.

“An interesting trend we’re seeing in athletic socks is the rise of the silhouette in both a quarter-crew style that’s two inches above the ankle and a full-crew style up to the calf,” said Polidori O’Brien. “It’s kind of like from the Seventies and it’s worn so the sock shows above a high-top sneaker. We’re seeing it worn by basketball players and street kids, and while black and gray are still selling strong, neon brights continue to trend. There’s even a range of neon orange and blue and tomato red for men.”

“Textured, fine hosiery with a windowpane pattern has been blowing out at stores…It’s not heavy textured tights like sweater knits, but more like fishnet hosiery with textured lace patterns,” commented Klein. A best-selling item has been a fishnet tight with an embroidered lace back seam in black or white that has “almost sold out” for spring, he said.

Klein further noted that a group of sheer hosiery called Pure Shine 15 in a range of 12 skin tones aimed at the ethnic market has been successful.

“It gives a direction to sheers that hasn’t been there before,” said Klein.

“Based on retailer point-of-sale [feedback], we are still experiencing a resurgence in sheers, and we are seeing that tights are being worn longer,” said Hawkins.

“I think the suspender look has been our signature in the market for a while, but illusion [hosiery] continues to see growth,” said Eugene Culhane, sales director for London-based Pretty Polly. “Pretty Polly is about being a very accessible brand and we put that faux suspender look in Pretty Polly Curves [full-figure hosiery] 12 months ago. Over the last month we’ve introduced fashion items as well as standard tights in sizes up to XXXL. It’s also done really well in Europe.”

Rocco Damiano, U.S. manager for Pretty Polly, said 10,000 units of Pretty Polly Curves have been sold at Nordstrom over the past three months.