Hue Legwear to Launch in China

The U.S.-based legwear brand will be sold in 15 doors in the country, including shops-in-shop in major department stores and branded Hue boutiques. 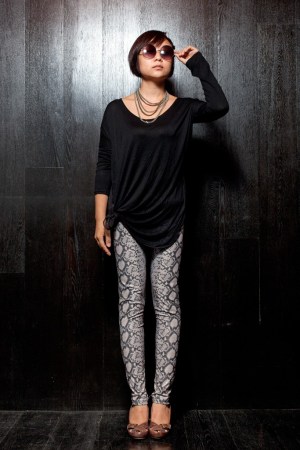 Kayser-Rroth Corp. has entered into a joint partnership with retail powerhouse E-Land Group China to launch Hue legwear, leggings and socks in China this fall.

The U.S.-based legwear brand will be sold in 15 doors in China, including shops-in-shop in major department stores as well as branded Hue boutiques in shopping malls, beginning in September. The first Hue store will open in Shanghai, followed by Beijing, Shenzhen, and Chengdu, and will offer a wide selection of fashion leggings, tights and socks.

“It was a natural expansion for us. Not only does the Chinese consumer have an affinity and curiosity for western labels, they are forward thinkers when it comes to fashion,” said Townsend.

Hue has been placing “great emphasis” on international growth over the past several years, and the brand is currently sold in Canada, Mexico, Spain, Australia and New Zealand. Townsend said the company’s initiative in the Chinese market was validated after conducting consumer market research with Shanghai-based Flamingo, a consumer brand consultancy.

“The brand presence in China will bear the same DNA — it’s fun, fresh, fashion [product],” said Townsend. “We did a lot of research to explore the legwear market in China, what the potential was for tights and leggings, usage, preferences and consumer patterns. We even set up a mock store environment and let consumers relate to the product….We offered the same collection of products that are sold in the U.S. and created product specifically for China, product that’s important to Chinese consumers.”

As an example, she singled out python-print leggings, which have “great appeal” to Chinese consumers.

“The Chinese woman is advanced and fashion-forward in her taste level in terms of legwear, much more so than the U.S. consumer….There are a lot of nuances about the Chinese customer….She’s crazy about snake prints, laces, and the department and specialty store consumer in China wears fashion tights and leggings far more than American women do,” observed Townsend.

She further noted that resizing the Hue legwear program for China was essential.

“We did develop specific sizing for China. I think we learned from the benchmark of many other companies that unsuccessfully took the same fit and sizing used in the U.S. market to China,” she said.

A first-year retail sales projection was not available, but Townsend said the potential is “huge” for expansion of the Hue brand into China, the world’s second-largest economy.

Regarding marketing to the Chinese consumer, plans include an advertising and social media campaign, as well as public relations and celebrity partnerships. A high-profile event is being planned. No further details were available.

“Celebrities are very important in China, and a celebrity event will be extremely important to the launch,” she noted.