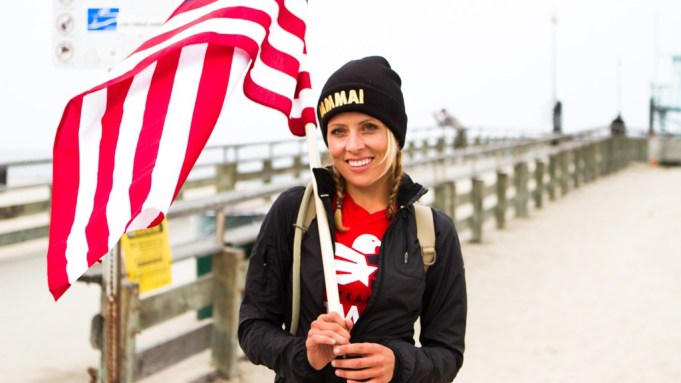 A 35-day Kickstarter campaign has helped Andrew Gallery accelerate the relaunch of his IAMMAI activewear label.

The Los Angeles-based designer reaped nearly $101,500 thanks to 923 backers, making his campaign one of the 10 most-funded apparel ones ever. In search of $24,000 in funding initially to debut self-cooling T-shirts and tanks, Gallery said the 1,760 Kickstarter-driven orders also tripled his expectations.

Gallery’s start-up is actually in its second incarnation and he has dealt with all sorts of serendipity along the way. After introducing the I Am label in Equinox stores and other select locations in 2011, Gallery decided to suspend distribution the following year to rework and broaden the collection.

Renamed IAMMAI, each piece carries motivational affirmations that are written backwards so that gym-goers can read them in mirrors while exercising. Sold via Barry’s Boot Camp and Cardio Barre, the capital infusion is meant to help broaden retail distribution.

Looking to add performance-driven pieces, his adviser, Kelly Cutrone, suggested he check out Coolcore, the New Hampshire-based cooling fabrics company in which Chris Burch is a major partner. “Disney had approached these guys to develop a fabric for Disney costume characters to wear because they were overheating in the theme parks after only a few hours,” Gallery said.

Using Coolcore’s nonchemically coated moisture-wicking fabric, IAMMAI activewear cools down 30 percent faster than comparable fabrics, Gallery said. To try to prove that point, his Kickstarter package included a one-minute video post of him pouring boiling water on an IAMMAI shirt and a Nike one, and then wringing each out and using thermometers to demonstrate how his brand cooled faster. He said Wednesday, “It’s not like a miracle shirt, but at the same time, if you are an athlete every little bit helps. I always think about Michael Phelps, who won his seventh gold medal by one one-hundredth of a second.”

A Philadelphia native, Gallery also scored some valuable advice after reconnecting with a childhood friend, Jake Bronstein, who is the founder of Flint and Tinder, the American-made label that remains Kickstarter’s top-funded apparel project. For two years, Bronstein has had the advantage of having Zappos’ Tony Hsieh as an adviser. IAMMAI is said to be the fourth top-funded clothing project on Kickstarter.

To put his products to the test, Gallery has recruited such athletes as The Heroes Project founder Tim Medvetz and ultrarunner Anna Judd, who finished her 3,200-mile run across America — averaging a marathon a day — in late August. He flew to New York to run the last 10 miles with her. Gallery said he is big on endorsing athletes whose accomplishments inspire others and he ran the last 10 miles of the trek with her. He also imprinted upside-down messages on her leggings and shorts, so she could read “Run with your heart” and “Remember why you started,” while she ran. Anna Runs America was meant to raise awareness for veterans’ issues. His company also sponsors Charity Miles, a free app that tracks the distance users walk, run or bike and donates money to the charity of their choice.

Keen to broaden his distribution to high school and college sports teams, Gallery, a former rowing team member at Ithaca College, reached out to his alma mater. Through that conversation, he learned that Burch is a fellow alumni (who also funds and judges the Ithaca College Business Idea Competition.)

In another strange twist of fate, Gallery wound up spending six hours with the spiritual leader Mata Amritanandamayi, who is better known as “Amma,” in Los Angeles. Cutrone made the introduction, but the fact that his company reads like her nickname was a coincidence. When Amma surprised him with an invitation to visit her ashram in India, Gallery jumped at the chance. “I know it sounds so cliché, going to an ashram in India. But I have friends at the charity RainCatcher who invented water filters for poor communities. So I went to India and brought them. We smuggled water filters and each day, we would bring them to different villages, hospitals and orphanages,” Gallery said. “It’s unbelievable how everything fell into place. I wouldn’t say it’s been easy, but it’s been amazing. I feel really inspired that we have started again really strong. Everything seems to be in alignment with the funding and everything.”