Innerwear executives set to attend this week’s market said they are wary of the still unpredictable retail climate. 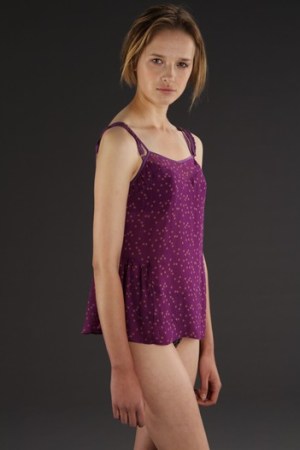 Higher consumer spending helped lift the economy in the first quarter, but innerwear executives set to attend this week’s market said they are wary of the still unpredictable retail climate.

March, bolstered by an early Easter, was a strong month for intimates at retail with increases in the midsingle digits to as much as 33 percent or more, and April kept up the pace, the executives said. Value-priced merchandise such as basic undies and bras, as well as sexy items with a fashion twist, like baby dolls and chemises, are key.

Despite the positive sell-throughs and improved consumer sentiment, executives said there isn’t a way to gauge consumer spending with any accuracy, particularly because of high unemployment and tight credit. As a result, they are concerned stores may continue to be understocked for months, or possibly into 2011.

“Buyers are trying to be optimistic, but they still remain cautious,” said Marcia Leeds, chief executive officer of Richard Leeds International. “Although business has picked up and retailers are asking for immediate inventory, it’s a reflection of stores being underbought. Retailers seem to be breathing a little easier, but some remain worried in this volatile marketplace.”

Seth Morris, president of The Carole Hochman Design Group, agreed that what he described as “the continuing volatile landscape we are experiencing” has bred caution.

“From day to day, no one knows whether it will be issues with financial markets, fabric prices, labor shortages or even volcanic eruptions that will impact our business that day, week or in the coming months,” he said. “I think consumers have money they are willing to spend, but they definitely remain value-driven.”

Madison Avenue showrooms are booked up with appointments, and the majority of vendors will show daywear, sleepwear, robes and loungewear, categories that were unveiled in February for fall and holiday selling, as well as an early spring preview. Foundation firms will be introducing bras and shapewear for spring 2011.

However, retailers are expected to remain conservative with the exception of volume programs, and remaining open-to-buy dollars will be doled out for top-performing brands, key pieces and new products that can be spun into replenishable items.

“A lot of stores have right-sized their business based on the economy, and will come in with realistic expectations,” said Greg Holland, vice president of sales at The Komar Co., and president of the licensed Donna Karan and DKNY sleepwear collections. “I think this will be a good market and stores that are underinventoried will be looking to buy in-season.”

Orders are not expected to be final for four to six weeks.

Another issue among executives is whether the increases so far this year are a fair measuring stick when compared with the dismal results of a year ago.

Victoria Vandagriff, executive vice president of sales at Russell-Newman Inc., which makes sleepwear and robes by Karen Neuberger and the licensed Laura Ashley name, said she believes sales estimates are “inflated” compared with last year and even with 2008. The company’s March business is 4 to 5 percent ahead of the same year-ago period.

“Everyone is really challenged and retailers are still very cautious, but they are now easier to deal with because business is stronger,” she said. “There was a shift in Easter business, with Easter this year falling in early March compared to April 2009. That helped. The consumer is shopping again, but she is cautious and extremely price-driven. We’re seeing that with the repricing of packaged panty programs of three pairs for $30, three pairs for $24, and even five pairs for $15.…Right now, retailers are looking for the big idea, a replenishable, one million-unit panty.”

Addressing inventory issues, Gale Epstein, president and creative director at Hanky Panky, noted, “In general, retailers are in underinventory mode. They seem to be happy doing more sales with less inventory. But we feel this can hurt them in some circumstances, for example, skimping on basic colors.

“But we’re back on track to 2008,” Epstein said. “We’re so encouraged by the uptick in sales that we have begun comparing our figures to 2008, rather than 2009, business.

“There are several ways we’re meeting the challenge of consumer expectations: we launched our organic Cotton With a Conscience value program, we’re offering fun holiday packaging and creating exclusive variations for major accounts, and Hanky Panky’s plus-size collection is expanding to include boyshorts and camisoles in response to customer demand,” Epstein said.

A new division launched this year, Hanky Panky After Midnight, which features garter belts and crotchless thongs and panties, has received positive feedback, she said.

Donna Karan
“Spring is about the ultimate second skin…”

Stella McCartney
“This season’s lingerie is what every woman needs — it has something for everyone….day, evening and even the lucky days.”

Cynthia Rowley
“I wanted Slim to be sporty and sleek, combining elements of shapewear and lingerie.”

Josie Natori
“The whole feeling is very much like a spring festival — just happy, bright colors and prints. It’s all very Bali-inspired, where I recently vacationed.”

Eileen West
“The theme for our May collection is Enchanted Spring. The inspiration comes from our Sonoma home with its green fields and amazingly abundant wildflowers.”