Execs say the main reason May market focused on a potpourri of merchandise for different seasons was because of the impact of the recession. 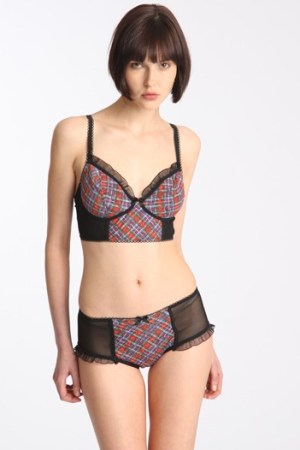 Several factors thinned out retail traffic at the May market, which typically is among the smallest seasonal venues — the continuing credit crunch, the absence of lingerie trade fairs that are staged during the two largest markets in February and August, and the swine flu scare.

Executives at several major innerwear companies acknowledged there were sporadic cancellations due to the fear of traveling during the swine flu outbreak, but said the scratched appointments had a minor impact on business overall. While May is primarily a spring foundations market, the tough retail climate has forced bra companies and sleepwear, daywear and loungewear firms to become a resource for all seasons: immediate merchandise, fall and holiday, and a snapshot of new product for next year’s spring and summer selling.

While innerwear executives characterized lingerie and sleepwear business at retail as remaining stable during tough times, they said a main reason the market focused on a potpourri of merchandise for different seasons was because of the impact of the recession, as well as the inventory glut at major stores and specialty operations. But selling floors have begun clearing out through promotions, slashed prices or returns to vendors, and merchants are ready to freshen up departments with new assortments, said executives.

“I think retailers have been very inventory-conscious for the last six to seven months,” said Seth Morris, president of Carole Hochman Design Group. “We have seen no real slowdown on the timing of purchases, but have certainly felt it on the depth and breadth of purchases like everyone else. The [innerwear] category is stable and holding its own, currently. I think the category has done better in past recessions than this one thus far, but I also think this recession has become deeper and larger in scope than any we have seen in the last 30 years.”

Regarding the pace of the market, Morris said, “There are less stores to sell to today, but we were very busy. We find larger customers often coming back to see us a couple of times during the week to review and rework lines. This has become very helpful to us in ending the week with a clearer focus on the strengths and weaknesses of any specific branded division. On Gossamer had a very good response to the newness presented and our Betsey Johnson Intimates was also very well received.”

Victor Lee, president of Viceroy Collections, the U.S. distributor for British labels Myla and Shock Absorber, described the market as “moderately slow, due to lower traffic.”

“Many follow-up phone calls were made instead of visits,” Lee said. “The lower traffic seemed to have more to do with the economy than the swine flu scare. Since Shock Absorber is a year-round business, we are constantly selling and seeing customers. Markets are still important to meet new customers but our existing customers buy on replenishment. For Myla, which is a high fashion brand, we count on the markets to show new collections. Reaction was very strong to holiday, but we think buyers will still be a bit cautious in their purchases.”

“They are seeking to put something very special on their floors for the holiday gift-giving season,” he said. “The product has to be relatively unique and different, but in a salable way. Price is constantly an issue. However, if the product is right, retailers are confident in their purchases.”

Greg Holland, executive vice president of sales at the Komar Co. and president of the licensed Donna Karan sleepwear brand, said, “Most major customers came in and small store traffic was light as anticipated.

“We should see an increase in the attendance of small stores in August,” Holland said. “We did not show Donna Karan, which we show twice a year in February and August, but we showed new [sleepwear] collections by DKNY, Liz Claiborne, Eileen West, Ellen Tracy and Aria. Retailers are all looking to refine their assortments, reduce duplication, focus on key items and offer value pricing. Overall, I believe sleepwear is holding its own compared to other store categories. No one is expecting increases given the economic situation we are in right now.”

“It was a moderately busy market, but we had strong response to our daywear,” Epstein said. “Printed camis with lace-on-lace prints and neon animal prints were well received, as well as innovations with our thong in prints and solids. We’ve had success with prints this spring and retailers wanted to repeat the same in fall trend prints. Trend is key to sales right now.”

She added orders are expected to be finalized at the end of this month.

“Our accounts seem to be more hopeful and optimistic than last market,” Leeds said. “After all, what is the choice?”