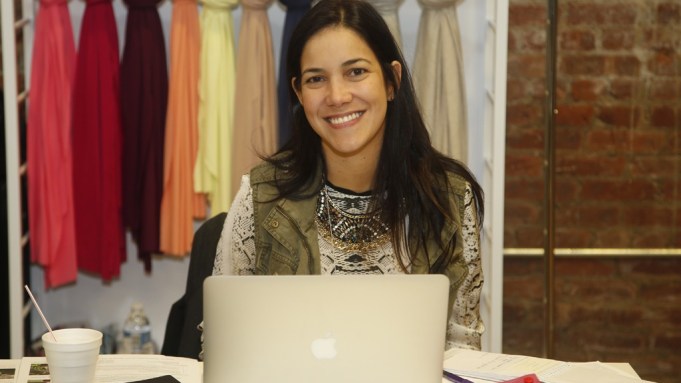 NEW YORK —  The first edition of Interfilière New York, with 30 exhibitors showing fall 2015 fabrics aimed at the innerwear, swimwear and activewear markets, demonstrated specialization of materials while also highlighting how sectors are often blurring the lines.

Connecting the fields are key themes, such as “comfort, freedom and movement,” that exempify what women want more than ever in their wardrobe choices, stressed Marie-Laure Bellon-Homps, chief executive officer of show producer Eurovet, during a comprehensive video trend presentation. “Sport is speaking to women and causing boundaries to be crossed. It’s about combining comfort and glamour, integrating comfort and beauty.”

It’s why women want fabrics that are light, yet address changes in climate and activity, noted Bellon-Homps.

These trends were underscored by Invista’s launch at the show of its “Lycra Moves You” brand strategy, which enhances the core Lycra spandex line with four subbrands. Pattie Ficorilli, senior account manager for intimates at Invista, explained that the new initiative is aimed at raising awareness of Lycra’s value-added characteristics and addressing this specific market segment’s need for more-specialized fibers, while “connecting more with the consumer, emotionally, physically and creatively.”

In addition to the master brand, which has long provided freedom, comfort and movement when blended with other fibers and fabrics, Lycra Moves You Now features Lycra Beauty for control and shaping, Lycra Sport for physical activity and sports, Lycra Xtra Life for garment resilience and durability, and Lycra Energize for well-being.

The campaign, which will be ongoing and comprise consumer, in-store and trade marketing elements, will include new hangtags and materials to communicate better to consumers the value of the Lycra brands.

Separate brand imagery and visuals have been developed for the categories of swim, performance denim, shapewear, and hosiery and lingerie. B2B and B2C Web sites Lycra.com and Lycramoves.com, respectively, have been created to assist customers in marketing and using the brand and understanding its special characteristics.

The show, held on Sept. 23 at 83 Mercer Street in SoHo, attracted more than twice as many visitors as last year’s first attempt, called “A Taste of Interfilière,” to bring the French trade fair to the U.S., according to Pierre-Nicolas Hurstel, ceo of Curvexpo, a subsidiary of Eurovet that stages its own intimate-apparel and swimwear fairs and helps to organize the Interfilière New York exhibition.

Hurstel said 170 people walked through the doors before noon, representing a 70 percent increase. This success will mean another edition next year, with further enhancements aimed at a “workshop-style atmosphere” that combines a showcase for exhibitors with industry collaborations and informational presentations.Efforts will be made to continue to present a geographically balanced cross section of the best mills in Europe, Asia and the Americas.

At this edition, Paola Restrepo, commercial director for Colombian manufacturer Vila, said the show was an important opportunity for her company to expand its base into the U.S., as its main customers are now within Latin America.

Restrepo explained that Vila was a vertically integrated innerwear manufacturer that mostly uses nylon, spandex and viscose to make a colorful array of merchandise. With the trade benefits of the U.S.-Colombian Free Trade Agreement, she felt Vila’s prices were highly competitive for the U.S. market.

Daniel Chalem, president of Tejidos Gulfer, a Colombian textile mills and shapewear manufacturer, said the FTA also has helped his company build a U.S. business. Tejidos Gulfer is certified in the Lycra Beauty campaign and will use its hangtags and materials in its shapewear product.

Klauber Bros. was getting attention with its Leavers lace that produced in the U.S., while Germany’s Willy Hermann’s Superfine booth was busy showing off its fine-gauge fabrics and the U.K.’s Simplex Knitting Co. was discussing business for its Simplex, 40-gauge tricot and Raschel power fabrics.