La Perla and Agent Provocateur have both opened stores in Hong Kong as part of their Asian expansion strategy.

By Amanda Kaiser
with contributions from Casey Hall
on November 19, 2015
View Slideshow 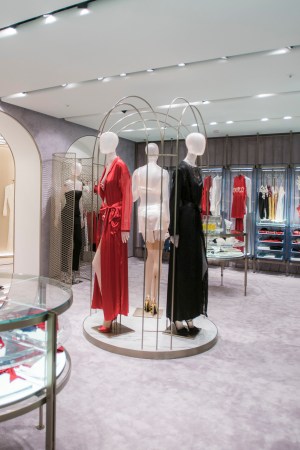 Angelito Tan, cofounder of RTG Consulting, said that sales of lingerie in China last year rang in at $20 billion and are projected to grow 18 percent this year. Luxury lingerie sales accounted for approximately one-third of the market last year, he said.

Both Agent Provocateur and La Perla said they are seeing strong growth in Asia. Many of Agent Provocateur’s stores in China were opened recently and don’t have year-on-year comparables but the British brand’s Beijing store is currently up 30 percent in terms of sales, according to Agent Provocateur chief executive officer Garry Hogarth.

“We budgeted fairly low because we weren’t quite sure what to expect and we’ve been so pleasantly surprised that business has been really good,” he said, adding that the brand has been building its Chinese consumer base both online and through its bricks-and-mortar stores around the world. “I think quite a lot of racy things have been bought by the Chinese actually. I think they’re quite open to, you know, buying interesting lingerie. Maybe they hadn’t had the option before.”

Hogarth said the company posted global sales of around 70 million pounds, or $106.48 million, for the year ended this past March and that should grow to 80 million pounds, or $121.69 million, for the year ending next March. Asia and Australia currently account for 10-12 percent of the total and that is only set to grow as Agent Provocateur plans to add some 20 new stores in the region over the next two to three years, he said.

La Perla managing director Chiara Scaglia said Asia contributes 15 percent of her company’s global revenue at the moment — she declined to give a sales figure. Sales growth in Asia in like-for-like terms is up 40 percent, outpacing the company’s global growth rate of 30 percent, she said. The executive said the Italian brand is concentrating on growing sales at its existing sales points rather than opening new stores.

“Old stores have been doing well, even those we haven’t refurbished,” she said. Scaglia attributed the brand’s success to its recent diversification beyond lingerie to other areas like accessories and apparel. “In Asia, for example, our clients are very receptive to our loungewear,” she said, specifying that the category makes up 30 percent of its sales in the region. “We are bringing novelty to the brand mix that is already existing in China and we are also bringing something that can complement the whole outfit of a client.”

Matthew Crabbe, Mintel’s APAC research director, said lingerie-makers have plenty of room to grow their businesses in China, both online and through physical stores.

“The high-end lingerie market is growing strongly, basically because average incomes have continued to grow strongly, leading to more consumers being able to afford better quality, higher-priced products,” Crabbe said. “Overseas online shopping also makes it much easier for foreign brands to reach more Chinese consumers, without even needing to have physical stores in China — while the growth in overseas travel by Chinese consumers is also helping to create more brand reach.”

Similarly, Tan said lingerie is just starting to benefit from an uptick in consumption in China and he sees ample potential.

“As lingerie is not visible outwards, it has long been a barrier for high-end lingerie brands. We recently did a study on the new generation of women in China, and what we are now seeing is the continued emergence of the powerful and confident leading woman,” Tan said. “She is influential, independent and a driving force in the market. She is also gaining confidence in her appearance and her body, making her curious and open-minded towards trying new, daring and aesthetic lingerie. Ultimately this means that what is at times only visible to herself now becomes something of increasing importance.”