The ad campaign for cruise 2013 will focus on consumer confidence in fashion swimwear with Xtra Life Lycra fiber. 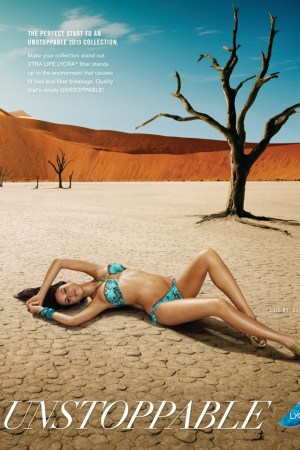 The campaign for cruise 2013 will focus on consumer confidence in fashion swimwear with Xtra Life Lycra fiber and will showcase new insights and scientific findings that support the advantages of Invista’s flagship swimwear fiber in a real-life swimwear environment.

“We wanted it to scream fashion swimwear,” said Ninabeth Sowell, global marketing director for intimate apparel and swimwear at Invista. “This powerful consumer and trade campaign truly brings together the emotional and technical benefits for fashion swimwear.”

Sowell said the campaign will include a new “Unstoppable” hang tag, brochures, and point-of-sale materials as well as customized retail promotions. There will also be a consumer-facing animated video and a behind-the-scenes video of the making of the campaign. The campaign will also be featured at several additional trade venues: Salon Allure, the Swim Association of Florida show in Miami, and the Xtra Life Lycra Brand Swimwear Show at Mercedes-Benz Fashion Week in Miami.

To illustrate extreme swimwear environments, Invista shot a series of three ads in a desert in Namibia, Africa, a lily pond in Mauritius, Indian Ocean, and a snow forest in the Swiss Alps. Composed by Euro, the campaign was photographed by Stan Musilek.

Sowell noted that the goal of the campaign is to help brands and consumers see the benefits of Xtra Life Lycra fiber in a context that is relevant to fashion swimwear, combining new insights on consumer behavior patterns with new technical information.

“We’ve been working on this for two years….We’ve begun talking to some selective swimwear brands and some are actively involved in the campaign….Fashion swimwear has some very specific drivers and Xtra Life Lycra is known for its resistance to [fabric] degradation,” she explained.

Invista is currently speaking with more than 80 fashion swimwear brands in the U.S. and many more in Europe. Brands featured in the launch campaign include Sauvage, Maryan Mehlhorn and Vitamin A.

Key findings of a consumer research study commissioned by Invista and gleaned for the campaign include brand loyalty and how Xtra Life Lycra fiber resists fiber breakage and fit loss five times longer than other chlorine-resistant elastanes.

• Women spend 40 percent of their time in their swimsuits by the pool where the suits are exposed to damaging conditions including sunscreen, chlorine, perspiration, body oils and heat.

• 71 percent of women said they are less likely to buy a brand again if the suit wears out sooner than expected, while 48 percent would shop at a different store next time, and 69 percent would buy a different brand than their previous swimwear.

• 77 percent of women said they would be more likely to buy a suit labeled with the Xtra Life Lycra fiber brand than one without.

The insights were culled from a series of scientific tests that impact fiber breakage with swimwear fabrics from three different mills, such as how sunscreen and pool water accelerate breakage, and the drawer test — consumers expose their swimwear to pool water and sunscreen and often do not wash their suits. Fabric breakdown continues even after she leaves the pool.

The results are good news for fashion swimwear brands that want to arm themselves against consumer disappointment and build brand loyalty.

“Swimwear fabrics exposed to sunscreen and pool water for 10 days showed dramatic differences between Xtra Life Lycra fiber and other chlorine-resistant elastanes on the market,” said Sowell. She added that consumers expected to wear their swimsuit for two or more seasons, but the fiber and fit begin to degrade before that time frame, creating “disappointment [that] results in reduced repeat [brand] purchases.”