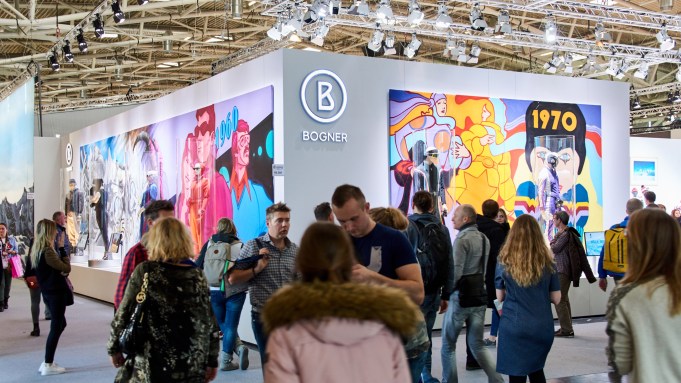 Sunshine and temperatures hovering around 50 degrees Fahrenheit was the setting for the winter sports-focused brands and retailers gathered at this year’s ISPO Munich. The heat is on — and it’s not just about responding to the realities of global warming. Participants at this year’s show, which ran Jan. 24-27, repeatedly touched on the need to diversify their offerings. And for some present, that meant bridging the shrinking gap between sport and fashion apparel.

ISPO itself had a makeover, after six years of the same hall configuration. Among the 2,645 exhibitors, there were newcomers in all sectors. Water sports were highlighted, including the growing trend of stand-up paddling, which has its own equipment and gear. And more room was allotted to the growing outdoor section, and the health-and-fitness segment.

In the booth featuring Only Play, for instance, Simon Buzzetti was browsing a pair of colorful running leggings that double as ski underwear. His sports shop in Madesimo, Italy, usually stocks performance brands like Phenix, Colmar, and Zero rh+.

“This is something new to us, but something we would like to introduce,” he said of the fitness gear.  “I think it’s the future. Selling skis is quite a problem, because it’s too expensive. Running is better.”

Part of the Danish fashion retail group Bestseller, Only Play is a spin-off of the casual Only women’s apparel chain. Morten Dahl, international sales manager for Only Play, explained that the brand would not be sold in its own stores, but rather in sports chains like Intersport, which already carries top-selling fast fashion brands like Vero Moda and Jack & Jones around Europe. “We find it interesting to have the possibility to [sell] sport styles coming from a fashion brand within the sports industry,” he said.

Other high-street brands merging fashion and sport were Desigual Sport and Bench. Previously, more skate- and sport-focused, Bench recently upped its game, increasing the quality and design of its fashion range — even adding cashmere to its lineup.

“Our idea is to make young people feel good in urban, stylish and edgy fashion. This is Bench and this comes through in our fall collection,” said the brand’s chairman and chief operating officer, Bruno Sälzer.

The vibrant athletics market was just one reason spirits throughout the expo were high, despite struggles at the end of 2015.

“Following the difficult Christmas selling season, the mood was decidedly better than expected,” said Klaus Dittrich, chairman and chief executive officer of Messe München, which hosts the fair. ISPO counted 80,000 visitors from 120 different countries during the four-day event. “The number of innovations and new products presented at ISPO Munich has further strengthened the confidence of this industry, which is currently coping with climate and structural change.”

“We’re talking about both sport and fashion, and we can cover both of them,” said Alexander Wirth, the new chief operating officer of ski heritage brand Bogner, also present in ISPO Vision. Wirth, who joined the German skiwear company from Ralph Lauren, said one focus was keeping Bogner’s many luxury customers, while broadening its premium reach. That also means thinking beyond the slopes and the season.

“We have make sure that within our collections — both sport and fashion — we have offerings suitable for the whole year,” Wirth said.

“As a retailer, we’d like to do the same but there’s a big difference between winter sports and summer sports,” pointed out Ambros Strolz, who oversees fashion for his family’s three high-end shops in Austrian resort towns. “In winter, you can sell jackets in a price range between 700 and 1,500 euros. In summer, the most expensive jacket is the price of the medium-priced midlayer. A zipper neck [pullover] from Bogner starts at 156, maybe 200 euros. In summer you have to sell the three-layer Goretex jacket for 179 euros.”

What’s the solution? “Pray for snow!” he laughed. He also said his stores are now more diversified than ever, offering fashion, fragrances, books and gifts, as well as bar and restaurant spaces.

“The ski market will continue to shrink,” said Ulli Ehrlich, head of design and managing director of Austria’s Sportalm, which sells ski, active and sportswear in 44 countries. “Where we are sold, we are already a luxury product. In the future, the fewer skiers there are, the more elite skiing will become.”

Ehrlich said she believes only apparel firms with higher price points will survive this sea change. But it’s not all gloom and doom. For her, visibility and diversity go hand-in-hand — Sportalm’s fashion line showed during Berlin Fashion Week this month for the first time, and the brand has also launched a premium fitness range she called “high-fashion sport clothing.”

“We are seeing in a lot of our markets that lot more people are going camping. It’s not about a high-performance goal, reaching the summit. It’s really more just about having fun in the outdoors,” Maffe explained, noting that social media is also playing a role. “You are starting to see outdoor brands playing more in urban lifestyle, more fashion-influenced products. So that’s something we see growing more than the traditional performance side, and that’s something we’re right on track with.”

The company showed off its “Mountain Athletics” line at ISPO, launched for this spring in Europe, but already selling in the U.S. It focuses on athletic training for outdoor sports, and utilizes an app to help users reach goals like climbing higher, or preparing for a ski trip six months in advance, or finishing a 50-k trail run. Of course, there’s also apparel and footwear to go with this new pursuit. Blending active and outdoor materials, hybrid construction and muted colors, the line is built for gym wear and aimed at urban customers who are looking to make a break for the wild.