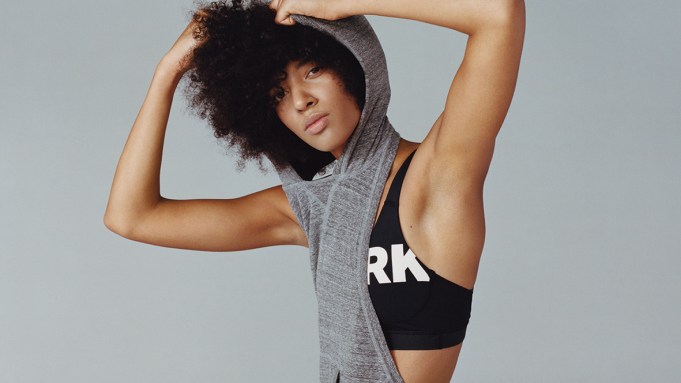 That’s Beyoncé talking in the motivational video about her new activewear brand Ivy Park, the fruit of a joint venture between the global superstar and retail tycoon Sir Philip Green. The stand-alone brand with 200 styles will land April 14 in more than 12 retailers in 50 countries worldwide including Topshop, topshop.com, Zalando, Net-a-porter.com, Selfridges and Hudson’s Bay.

The collection is aimed at women who love to sweat — whether they’re running, lifting, yoga stretching or kickboxing — and who equate physical strength and well-being with happiness. The pieces are meant to fit like a second skin, with built-in support and robust wicking fabrics that are designed to last.

On Thursday, the singer revealed the Ivy Park name, uploading a video of herself on YouTube wearing some of the pieces. On Instagram, she posted an image of herself suspended from a series of hoops in a gym.

The video — which should bring some viewers to tears — features Beyoncé working out in a leafy park and a gym, with a voiceover by the singer talking about how her daily workouts help her stay balanced, feel good, and kick stress.

“I would wake up in the morning and my dad would come knocking on my door, telling me it’s time to go running,” she says in the video. “I remember wanting to stop, but I would push myself to keep going.

The collection itself is meant to perform in and out of the sports arena, and has been designed around a variety of body types, ranging from XXS to XL. The company has not revealed price points, but they will sit in the high-street bracket.

There are three legging shapes, made from a sweat-wicking, non-pilling, double-faced polyamide elastane.

The three shapes — identified as the I, the V and the Y — have been designed to enhance a range of body types with signature seaming on each, all meant to elongate and flatter the leg. The core leggings feature inner contour shorts to smooth and support and each rise appears in three lengths, just under the knee; on the calf, and to the ankle.

There are tank tops with built-in sports bras, seamless knits and bodysuits — fitted with fishnet sleeves for a glam touch — as well as logo sweatshirts, basketball mesh oversize T-shirts and vests, and three-quarter length parkas. The outerwear pieces have heat-sealed tape bonded holes for headphone wires.

The color palette is neutral and slimming, and features cobalt, gray marl and black. There are also digital and reflective prints and embossed patterns in a honeycomb shape.

In addition to the Ivy Park logo, the clothing features the number four — the date of Beyoncé, her mother and her husband’s birthdays, as well as the couple’s wedding anniversary. She is married to Shawn Carter, aka Jay Z. The “iv” in ivy is a reference to the Roman numeral four and also to the couple’s daughter’s name, Blue Ivy Carter.

WWD broke the news of the collection in October 2014, and it was clear from the start the two partners had much more than a collaboration in mind. They immediately formed a 50-50 joint venture, stand-alone company, Parkwood Topshop Athletic Ltd., with its own staff and design team based in London.

Although Green’s Arcadia Group owns Topshop — which will stock the line — it’s very much a personal business project for both partners.

“Sir Philip has created some amazing collaborations, but I wanted a partnership and a stand-alone brand,” Beyoncé said. “When I’m working and rehearsing, I live in my workout clothes, but I didn’t feel there was an athletic brand that spoke to me. My goal with Ivy Park is to push the boundaries of athleticwear and to support and inspire women who understand that beauty is more than your physical appearance.”

She said “true beauty” comes from healthy minds, hearts and bodies. “I know that when I feel physically strong I am mentally strong and wanted to create a brand that made other women feel the same way.”

Green was referring to the Formation World Tour, an all-stadium affair that will start in Miami on April 27 and wrap up in Brussels. She revealed the world tour after performing “Formation” during half-time at the Super Bowl earlier this year.

Like Beyoncé, Green said he was not interested in a short-term collaboration. He also said “by good fortune” Topshop had never played in the ath-leisure space and the time was right to break into it.

He declined to give any sales projections for Ivy Park: “I think the line is great, but ultimately the customers will tell us. You can never guess these things, can you?” Green said, adding that Beyoncé was 100 percent on board with brand development, testing all the pieces herself. A further 50 people tried out the collection, which was made by specialist factories.

“She’s a fabulous professional. If she’s going to do something, she’s going to do it well — or she’s not going to it. And that’s the key thing for me. She had a lot to say about the fit, the straps. She was very engaged,” he said, adding that she was an ideal partner in other ways, too.

“If you were going to pick somebody, you would want her. She loves exercising, she believes in what she’s doing — and what we’re doing,” he said.

“It’s not often or ever that you’re going to get the chance to work with somebody like Beyoncé. It’s a pretty unique opportunity, so I think you have to develop this on both sides. She trusts me, she trusts us. And she’s been a customer for years. I used to take her shopping with her kid strapped to her back.”

Green’s Topshop currently has no celebrity tie-ins, though it collaborated with Kate Moss on collections as one-offs a few years ago. The hard-charging retail mogul has lined up some serious media coverage for his latest initiative. Elle has the exclusive Beyoncé interview on the launch, with 45 covers worldwide — including Italy, Spain, Finland, Poland, Denmark, Australia, Singapore and the Netherlands — and 10 page features inside each of the magazines. The issue goes to subscribers on Friday, and lands on newsstands on Monday.

In 2004, the singer and her mother, Tina Knowles-Lawson, founded House of Deréon fashion business and sold it to a division of Li & Fung in 2010. It is no longer trading.

Ath-leisure is one of retail’s hottest categories: On Monday Selfridges in London will open its largest-ever department, called the Body Studio, a concept store dedicated to all next-to-the-skin clothing, activewear and lingerie. The space aims to cater to a wide variety of body types and budgets.

As for other stockists of Beyoncé’s line, the Berlin-based retailer Zalando, which operates in 15 European markets, is taking on Ivy Park as it accelerates its activewear push. Zalando will offer an exclusive campaign and activation called #MyPark parallel to the April 14 online launch. Via #MyPark, consumers will be invited to share “their park” on social media and its digital hub.

“We are extremely excited to collaborate with Ivy Park for Europe,” said Carsten Hendrich, vice president of brand marketing at Zalando. “The collection for both on and off the field embodies the vision of empowerment, strength and well-being for all women, wherever they are.”