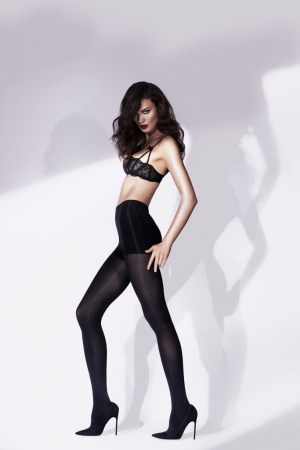 Produced under license by Canada-based Doris International Inc., the first-time launch in the U.S. this fall will include Living Lights technology by Lycra fiber. The patented technology from Invista Inc. creates deeper, richer colors and boosts the on-tone color uptake of elastane and spandex.

“Invista helped me develop the intense color for the opaque tights, and that was an incredible thing, because one of my biggest challenges was to design a true opaque tight but get that really saturated color. With the new technology, I could accomplish that,” said Bryant.

“I am truly obsessed with all tights, whether it’s sheer, opaque or specialty tights like lace and crochet, which are manufactured in Italy for my collection. That was another challenge: I had to create lace and crochet tights that were very soft…I wanted the whole collection to feel like butter and look luxurious on the leg,” explained Bryant. “One of my other favorite styles is the Glow sheer tight. When you put the Glow tights on your legs, it looks like your leg has been oiled. Forget the days of wearing makeup on your legs.”

Mike Profit, Invista’s marketing manager for legwear in North America, described the new technology as a “very important addition to all legwear.”

“They say timing is everything.…Invista was looking for partners to pioneer the newest innovation to the Lycra fiber called Living Lights, and we signed on to be among the first to knit sheer and opaque tight prototypes. Janie, who is focused on beautiful and feminine details, loved the deep color saturation and smooth appearance we were able to achieve with Living Lights. So we are happy to be first to market with Janie Bryant Leg Couture tights with the strength and trust of the Lycra brand,” said Brown.

Distribution is aimed at major stores, specialty boutiques and e-commerce sites. Sizes will be XS to XL. Suggested retail will be $18 for sheer tights, $20 to $22 for opaque tights and $25 for lace and crochet styles. A sexy, sheer black number with a crystal back-seam and mini bow will sell for $35.

A first-year wholesale sales projection was not available, but the legwear could exceed sales of $15 million, according to industry estimates.

Asked what projects she will be working on after the seventh and final season of “Mad Men,” which premieres April 13, Bryant said, “I’m working on selling ‘Janie Bryant’s Hollywood,’ a reality show that combines fashion design and costume design.…It’s about fashion inspired by film and TV. I’m also the brand ambassador for the Koret handbag line. Their bags were so popular in the Fifties and Sixties. I’ll be designing an evening bag collection for Koret for holiday. There’s also a line of men’s socks I’ve been designing for Mack Weldon. I also serve as brand ambassador for the brand.”