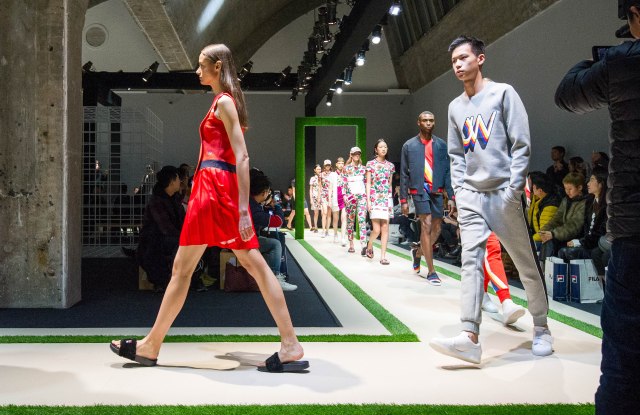 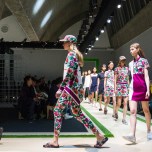 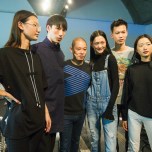 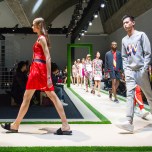 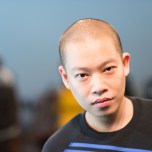 The ath-leisure phenomenon is a global one. But Jason Wu’s collaboration with Fila — now in its third season — is very much a region-specific project.

Unlike similar designer-sports brand mash-ups, such as Adidas Originals by Alexander Wang or Louis Vuitton’s Kim Jones for NikeLab, this collaboration is destined exclusively for the Asian market, specifically mainland China, Hong Kong and Macau. And Wu himself is taking great pains to keep things local — he even declined to speak to international press at a Beijing runway show of the line’s spring collection on Nov. 24. The show, which took place at the Pace Gallery of the 798 Art Zone, drew actress Zhang Li.

Keeping with the aesthetics of the two previous seasons, the designer presented 67 looks inspired by the sports trends and classic Fila models of the Sixties and Seventies — albeit with a modern, youthful twist. Asymmetrical cuts, floral prints and geometric, color-blocked patterns defined most of the crewnecks, tracksuits, polo dresses and do-anything-in clothes that walked down the runway. There were plenty of nods to vintage Fila styles of the past, from the iconic tennis dress to pool slippers. The occasional JW monogram print adorned a sweater or the back of a cape.

“Our main customers fall [between the ages of 20 and 35],” said Brian Yiu, chief executive officer of Fila China and Hong Kong. “We wanted to create a collection that would reflect their lifestyle, something they could purchase to work out in but also wear in their everyday life.”

Wu was given full design freedom in drafting the line, with technical support from the athletic wear giant in selecting and working with sports fabric and textiles.

“We worked very well with Jason,” said Yiu, who declined to discuss sales or Fila’s expansion plans. “And hope to roll out more joint projects in the future, although I can’t say more than that for now.”

With the sportswear market in China expected to surpass the luxury sector and grow to $43.1 billion by 2020 from $25.3 billion in 2015, it’s no wonder Yiu wishes to continue the collaboration.

Chinese consumers have started embracing wellness and healthy lifestyles and they are spending their money accordingly.

“We haven’t suffered at all from the economic slowdown,” Yiu said. “Workout clothes have become wardrobe staples, and synonymous with comfort. People don’t want to make sacrifices on that. What puts us in a very strong position in the market is that while other sports brands offer mainly gym clothes, Fila has become a one-stop label for casual attire.”

The Jason Wu x Fila line, which hits stores in Asia next month, costs about 30 percent more than Fila’s regular line but Yiu is confident it will sell well.

“The past two seasons were incredibly well received, and it’ll be the same for this one. With Jason’s name behind it, why wouldn’t it?” he said.