The sixth annual Women in Industry luncheon benefiting K.I.D.S., or Kids in Distressed Situations, was a sellout. 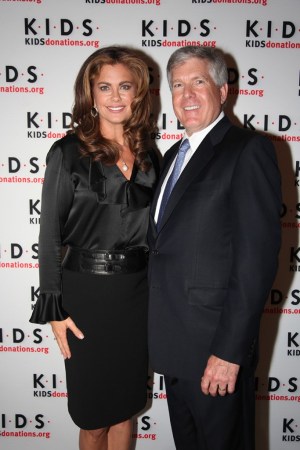 NEW YORK — The sixth annual Women in Industry luncheon benefiting K.I.D.S., or Kids in Distressed Situations, was a sellout.

The K.I.D.S. organization, which works with more than 1,000 community partners, has delivered more than $1 billion worth of merchandise ranging from pajamas, shoes and coats to backpacks, bibs and cribs to poverty-stricken communities. Over the years, products have been donated to needy children affected by the earthquake in Haiti and Hurricane Katrina, as well as to U.S. military families.

Ireland — who started her $2 billion brand in 1993 with athletic socks produced by Moretz Sports and later expanded into a licensing portfolio that includes swimwear, activewear, intimates and accessories —said for years, the Kathy Ireland brand as well as her personal image had been “under the radar.” She noted that faith and perseverance, along with a strong dash of businesses acumen, paved the road to her personal and professional success.

“It [the brand teamed with philanthropy] forced me out of my shy, quiet self of selfishness.…I learned it is so not about me. Earlier this morning I was talking about pivotal moments, epiphanies. I like to think of it as breakthroughs, these crystallizing moments when we collapse or break down, or we get back up and break through,” said Ireland. “For me, it was health issues…an accident where my teeth were shattered and my nose ripped from my face…a miscarriage that my family continues to mourn…a false diagnosis,” said Ireland. “Through mentions in the media, the way that people are aware of me is fragmented. Kathy Ireland? Isn’t she the model from the last century? Is she going to show me an old pose? If you like desserts like I do, you get a really good photo retoucher.”

Ireland, whose career was most notable for appearances in 13 consecutive Sports Illustrated swimsuit issues between 1984 and 1996, said modeling was not her first choice.

“My passion and strength has always been design and fashion. But I’ve learned so much from my modeling career. Yes, I’ve met my fair share of pervs but, yes, I’ve met some great people too,” she said.

Discussing her philanthropic efforts, Ireland brought up the Elizabeth Taylor AIDS Foundation and the late diva, whom she described as a “mentor.”

“She [Taylor] was so frustrated she would ask, “Why isn’t anyone doing anything?’ Then one day, she looked in the mirror and said, “Wait a minute, I can do something.’ When she called her friends, some hung up on her. She even received death threats,” recalled Ireland.

Regarding her efforts with K.I.D.S., Ireland said she has another celebrity friend who has become the organization’s newest supporter: Janet Jackson.

The luncheon was underscored by a tribute to Dr. Janice Weinman, who has served as the organization’s president for the past decade during which product contributions grew from $25 million to $100 million. Weinman’s new post will be chief executive officer of Hadassah. A successor has not been named. David M. Coleman, a board member, will serve as interim president.