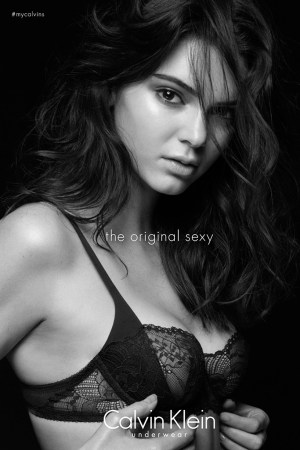 Kendall Jenner loves posing in her underwear. Jenner, one of the most followed and photographed people in the world, will join the steamy society of Marky Mark, Michael Bergin, Kate Moss, Eva Mendes, Justin Bieber, Lara Stone and Christy Turlington, who over the years have all stripped down to their Calvin Klein undies.

In terms of daring, the new underwear ads rank up there with some of Calvin’s sexiest. And the company’s creative team sees the campaign as a reassertion of its risqué tradition, signaling the return of “The Original Sexy.”

The 19-year-old model was shot with Joan Smalls, Isabeli Fontana and Edita Vilkeviciute. The ads break at the end of the month.

“It was super fun. Every girl loves posing in her underwear. It’s always fun to do that,” Jenner, reached last week in London, told WWD. “I’m close with Joan, and me and all the girls are friends.”

Shot by Mikael Jansson in New York, the campaign features individual portraits of the models showcasing an elevated assortment of embroidered lace sling balconettes (a shelf bra that lifts the breasts to enhance their appearance, shape and cleavage), plunge-neck chemises and bodysuits in seductive fits. The ads will focus on the higher-end product, Calvin Klein Black.

“Calvin Klein originated sexy, and we’re going to reclaim, reimagine and reimage it,” said Melisa Goldie, chief marketing officer of Calvin Klein Inc. “We’re bringing together a powerful mix of women from all over the world to celebrate our heritage as a leader in the intimates category.”

The shoot took place at Pier 59 in New York. “I had flown in from Paris from Fashion Week for the day, and flew out that night to do the Chanel show,” said Jenner, who’s emerged as the fashion world’s most in-demand model and lives much of her life in the public eye via Planet Kardashian.

With 30 million followers on Instagram, Jenner plans to post some of the underwear photos on her own page. “The shoot was amazing. Mikael Jansson shot it, and he and I have a good chemistry. Having girls around who are all my friends, the energy was really great,” she said.

Jenner called Calvin Klein Underwear “definitely something I would wear…The bras are great; I was surprised at how comfortable they were.” She described the Calvin aesthetic as “really timeless, chic and classy.”

Asked if she considers herself a role model for young girls, Jenner replied, “I try to be.” And she doesn’t seem to fear any puritan backlash from the sexy images, saying she expects the reaction to the underwear campaign to be “great, why wouldn’t I want it to be great?”

On a personal note, Jenner has a lot of time off in August and may go on vacation, but “being home is a vacation,” said the model, whose calendar has been jam-packed the last few seasons with her reality TV show, runway shows in New York, Paris and Milan, and posing for magazine covers and ad campaigns for Klein and Estée Lauder. She also has her own Kendall + Kylie clothing collaboration with Topshop.

As for her modeling career, Jenner moves back and forth between the runway and commercial shoots. “They’re both pretty different to me,” she noted. “I enjoy doing both for sure. When I’m not doing runway, between seasons, I miss it. Runway is like an adrenaline rush. Shooting is trying to get the best product out of yourself.”

CKI’s Goldie has been working closely with Jenner for some time “and she’s already bringing a compelling energy to our brand that enables us to engage with a younger audience. That’s already starting to happen. She has a huge fan base.” Goldie described Jenner as “incredibly mature for her age. Totally professional and super engaged.”

Calvin Klein has wardrobed Jenner for her red carpet appearances, such as the Met Gala, amfAR Gala and the Tony Awards.

The new multimedia campaign spans digital, outdoor and print advertising and will run in 21 countries this fall. Digital placements on social and mobile sites will amplify and create conversation around “the original sexy” campaign. Ad imagery will also include the #mycalvins call to action, which encourages fans of the brand to participate in the social media campaign by posting a selfie wearing Calvin Klein. Goldie declined to reveal the fall underwear budget, but said it was flat to a year ago.

To support the campaign, model Tobias Sorensen will be featured in the retail marketing imagery for men’s key product launches such as Calvin Klein Magnetic, which combines the shine of metal and the intensity of color to create a visually impactful waistband.

The fall global media campaign is under the creative direction of Klein’s in-house ad agency and the ad agency Laird + Partners.

Asked whether Jenner will appear in future campaigns, Goldie said, “We hope so. We hope to continue the relationship.”

Jenner was more cagey. “You’ll have to wait and see. You have to keep some things secret.”