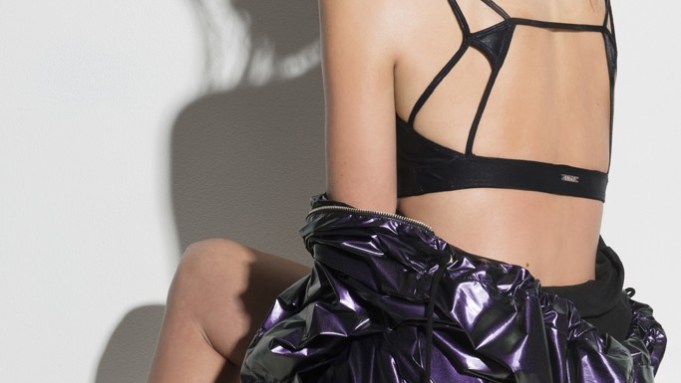 Designer Ilana Kugel is looking to make the Koral name — already well known on the Los Angeles denim scene — a force in the activewear market.

It was by coincidence that Kugel named her line Koral, and when denim guru Peter Koral found out, she invited him to see the collection and the two struck up a business partnership last March. After a capsule collection in spring 2014, Koral has ramped up to a 100-piece line with 17 groups for fall. The brand will be sold at Nordstrom, Shopbop, Carbon 38, Equinox, YogaWorks,  Barry’s Bootcamp and MGM and Aria resorts.

Wholesaling from $26 to $119, the line offers an edgy take on activewear with futuristic fabrics and sexy silhouettes, including a signature bodysuit.

“I played a lot with shapes and textures,” Kugel said. “There is a metallic fabric I call Infinity, a compression fabric called Evanesence, and a heather fabric called Cascade. My vision is always going from the gym to out with friends.”

Working with Peter Koral and producing everything in his Vernon, Calif., factory was a plus.

“One of the most amazing aspects of being able to partner with Peter is that he already had a facility, an in-house patternmaker and digital printers,” Kugel said. “Each piece goes into [a] heavy series of trials and fittings, so we have a hands-on feel for everything.”

Born in Rio de Janeiro and educated in São Paulo, Kugel moved to the U.S. in 2006 and was doing visual merchandising for Mango before her father invested in her first swimwear line. When her brother Marcelo Kugel came on board to handle the business, market research led them to switch gears from swim to activewear.

“For us to grow the company, it was a much better market,” she said.

Marcelo Kugel added, “Women in Brazil buy four or five swimsuits a month, whereas here they may buy only one or two per year. It gets down to numbers.”