L.A. Exhibition Will Trace History of Women’s Sportswear From 1800 to 1960

Fifteen years in the making, and with an assist from Serena Williams, "Sporting Fashion: Outdoor Girls 1800 to 1960" opens May 19.

Fifteen years in the making, and with an assist from Serena Williams, a major exhibition tracing the history of women’s sportswear will open this spring at the Museum at the Fashion Institute of Design & Merchandising in Los Angeles.

“Sporting Fashion: Outdoor Girls 1800 to 1960,” will explore the evolution of sporting attire in Western fashion through 100 fully accessorized ensembles composed of 700 historic objects collected by curators Kevin L. Jones and Christina M. Johnson. The exhibition will run in L.A. from May 19 to Aug. 1, before traveling to seven institutions across the U.S. through 2023.

The 350-page catalogue includes a preface composed by Williams after she wore a black catsuit reminiscent of the character “T’Challa” in Ryan Coogler’s “Black Panther” at the 2018 French Open. “I have pushed the boundaries of what is acceptable for women to do, to be, and to wear in sport,” she writes, while acknowledging that she stands on the shoulders of those who came before her. “Appreciate the courage and daring of all those women who refused to be confined to the home and insisted on enjoying life in so many ways historically reserved for men.”

The show highlights clothing women wore to participate in activities (including tennis, horseback riding, hunting, cycling, swimming, skiing, skating, flying and driving) both as athletes and as spectators, examining their clothing through the lens of function, fashion and propriety. There are pieces from well-known sportswear brands that still exist, including Keds, Spalding, Jantzen and Pendleton, as well as ensembles by Chanel, Patou, Hermès and Louis Vuitton. 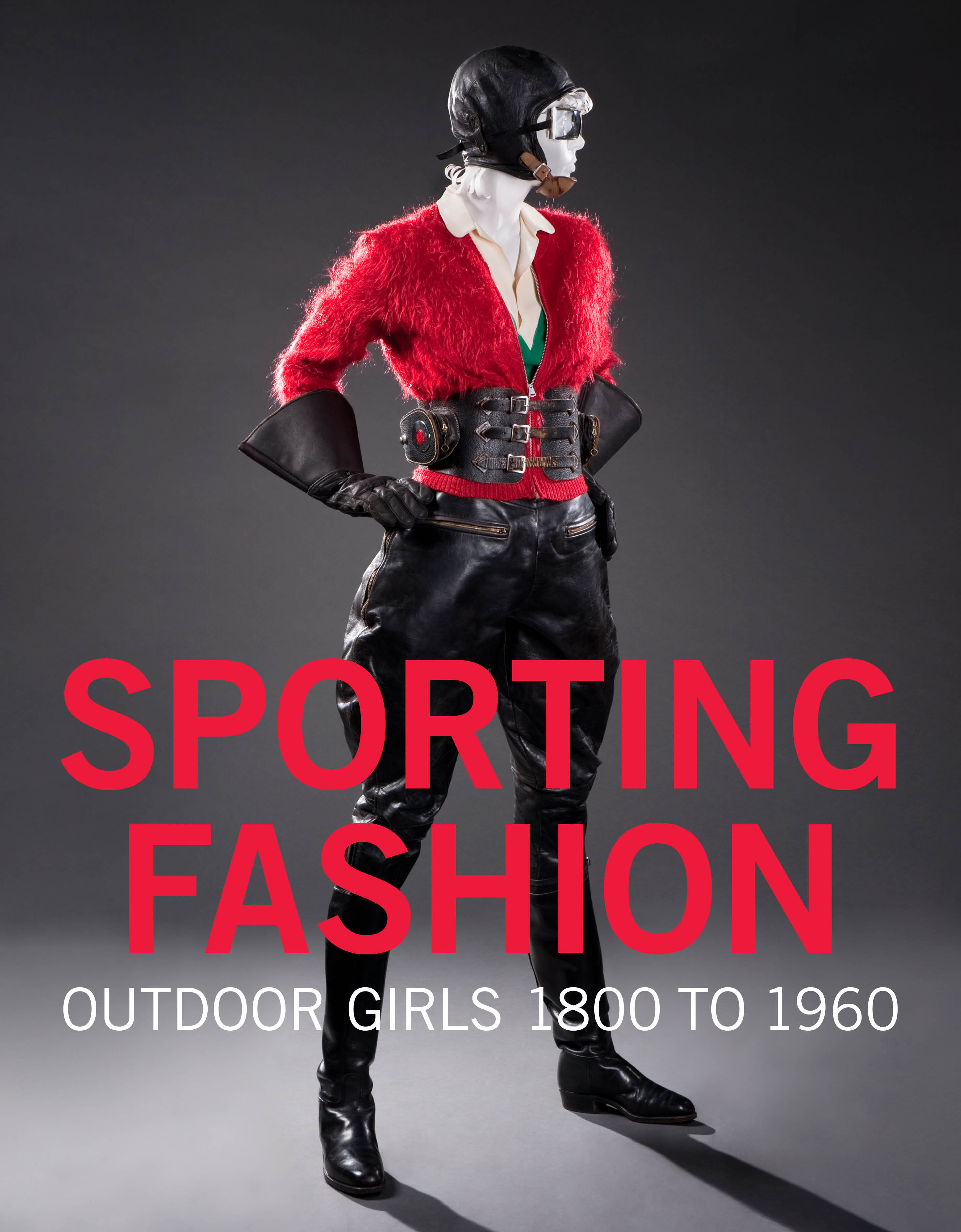 “Being in L.A., the sportswear capital of the world, helped to cement it, but also the fact that we had not seen the type of catalogue or exhibition that we knew needed to be done,” said Jones, whose introductory research stretched back all the way to the classical period, when women didn’t participate in the Olympiad, but in the Heraean Games, the all-female equivalent held every four years beginning in at least the sixth century B.C.

The exhibition begins in the 1800s when women began to step out of the domestic sphere, and ends in the Sixties when the basics of sportswear (including the racerback bra) had been codified, if not yet quite perfected.

“There are so few early sporting ensembles that have survived, to gather and present them as a unified whole proves sport for women didn’t start in the flapper era,” Jones said, noting that women participated in team sports as they became popular hobbies in the mid to late 1800s, just as men did. Even before then, women had to be clothed for outdoor pursuits such as promenading, lounging and sightseeing. “It was important for us to expand the definition of sporting fashion and sportswear; there are activities that in their day were a sporting endeavor, such as going for a walk, that was an early form of activity outside the home that women participated in, and they needed to develop what was appropriate to wear. It’s about the self-expressive enjoyment of outdoor life, whether passive or aggressive.” 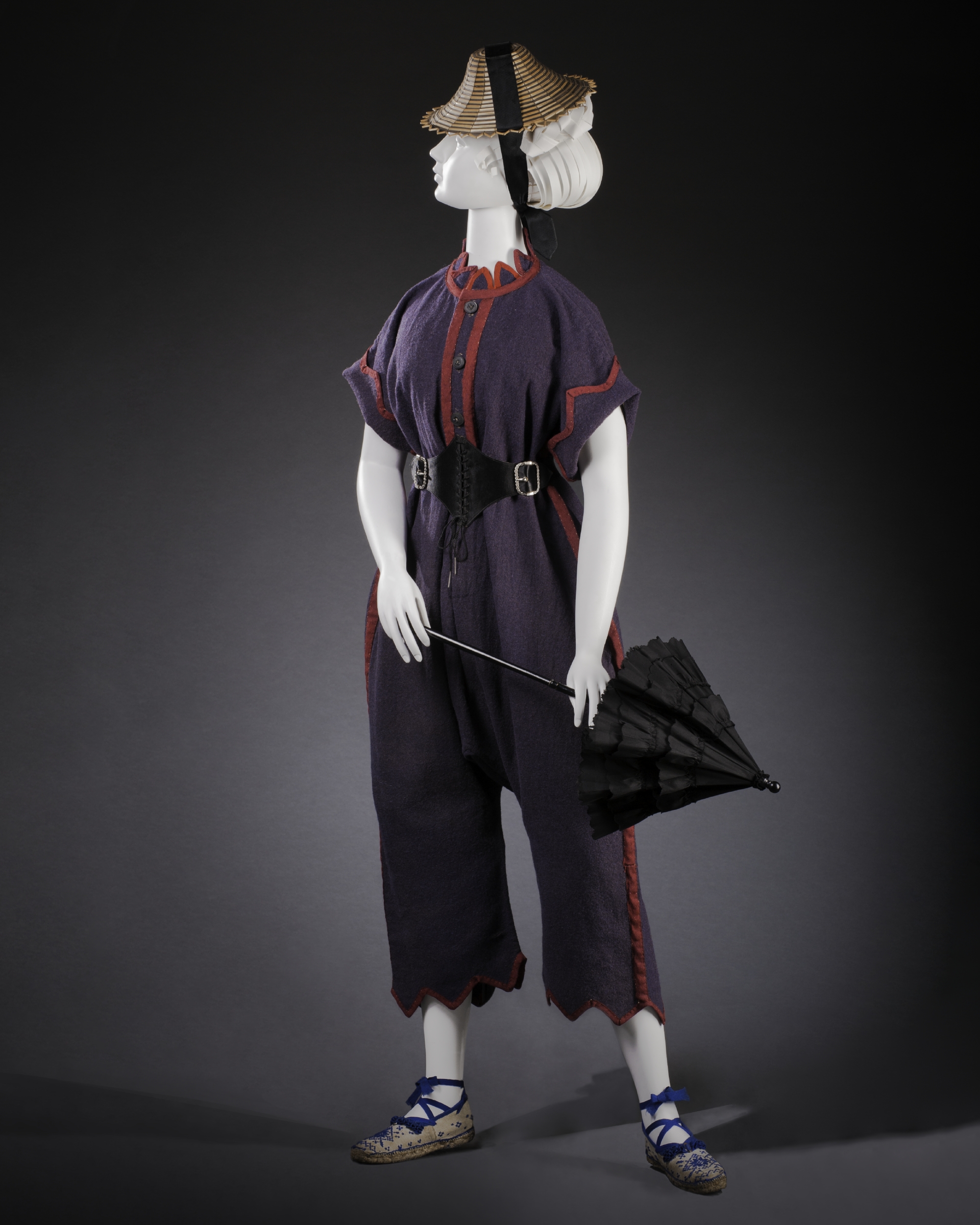 An 1860s bathing ensemble from “Sporting Fashion: Outdoor Girls 1800 to 1960,” open May 19 to Aug. 1 at the Museum of the Fashion Institute of Design and Merchandising in Los Angeles.  Courtesy

The curators tapped a number of sources for acquisitions. Some of the hardest pieces to find included a late-19th-century bloomer matched cycling ensemble, which they’d seen in illustrations and Punch magazine satires, and finally found via a dealer in Texas. Another incredible piece is a cabine de déshabillage, or a personal beach changing tent, held aloft by a steel hoop, from late-19th-century France, which they found with the help of a lace dealer in Spain. “It was a fantasy item that became reality,” Jones said, noting that the garment is trimmed in blue and white terrycloth. “We didn’t just acquire something that’s sportswear; visually it had to relate to fashion.”

Another holy grail was a Thirties dog coat (with a hilarious pocket on the rump for a matching handkerchief) embroidered with daisies matching the ones on a Chanel couture floral dress on display, that was designed for promenading during the Concours d’Elegance. “I couldn’t press the button fast enough to buy it,” Jones said of the Etsy find. “Animals were an extension of female fashionability,” added Johnson.

Although sporting clothing could be restrictive, women figured out ways to make it less so with raised hemlines and looser bodices, the curators explain, noting that they include multiple early undergarments in the exhibition, among them two rare unboned wool corsets.

Among their favorite pieces are a Twenties beach promenading ensemble comprised of a Jean Patou sweater and wool jersey sailor pants. “A woman could be on the beach or boardwalk wearing them, but by evening she would be arrested if she weren’t wearing a skirted outfit,” said Jones.

Another is a Thirties ranchwear look including dungarees and chaps. “This is true workwear, but at the same time, she’s wearing dungarees, which Vogue magazine published for the first time in an editorial in 1934. So it’s all this fantastic crossover,” said Johnson, noting the enduring power of sportswear. “Women were doing what they were interested in, but it had a broader effect on the fashion industry and what other women were wearing.” 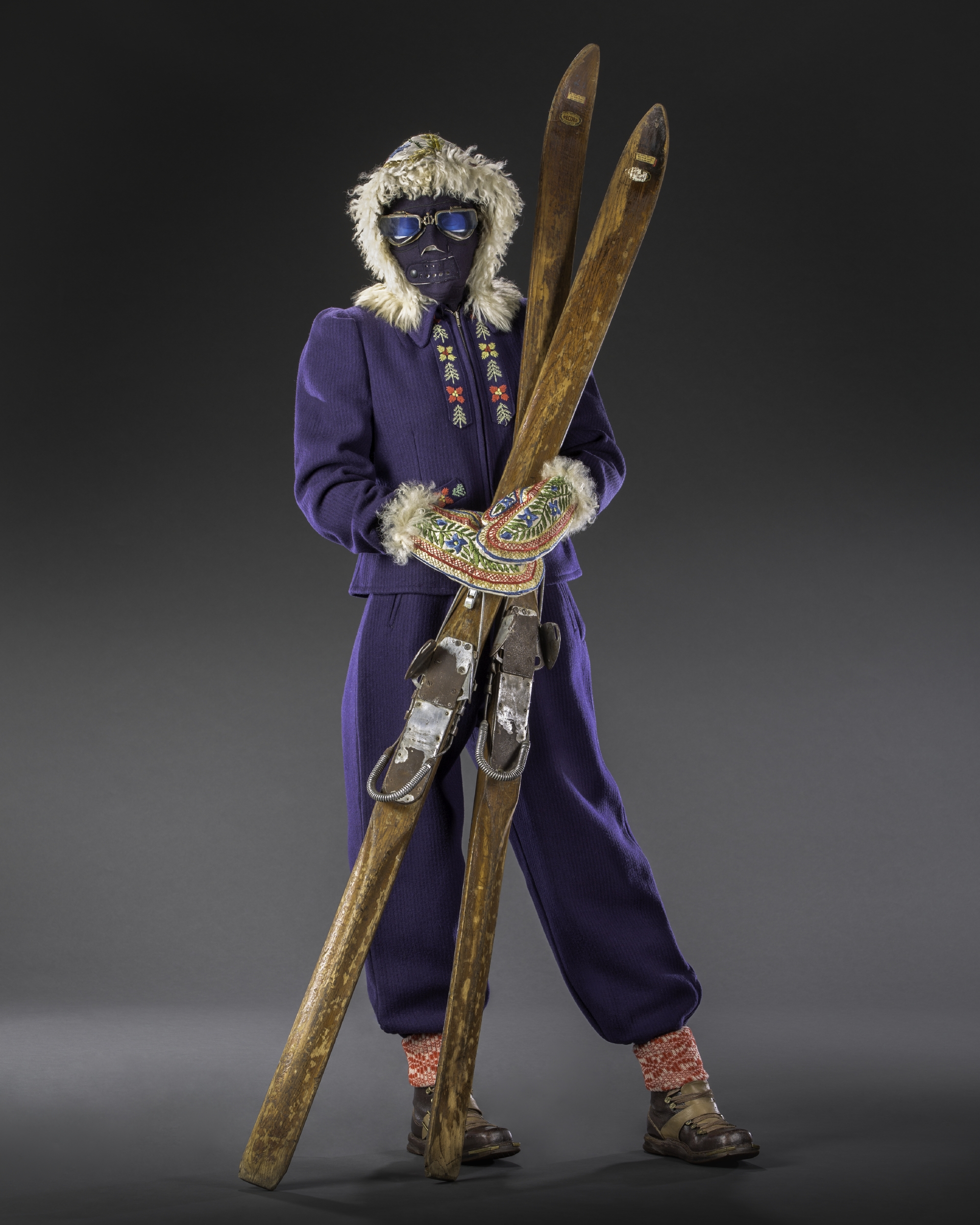 A Thirties skiing ensemble from “Sporting Fashion: Outdoor Girls 1800 to 1960,” open May 19 to Aug. 1 at the Museum of the Fashion Institute of Design and Merchandising in Los Angeles.  Courtesy 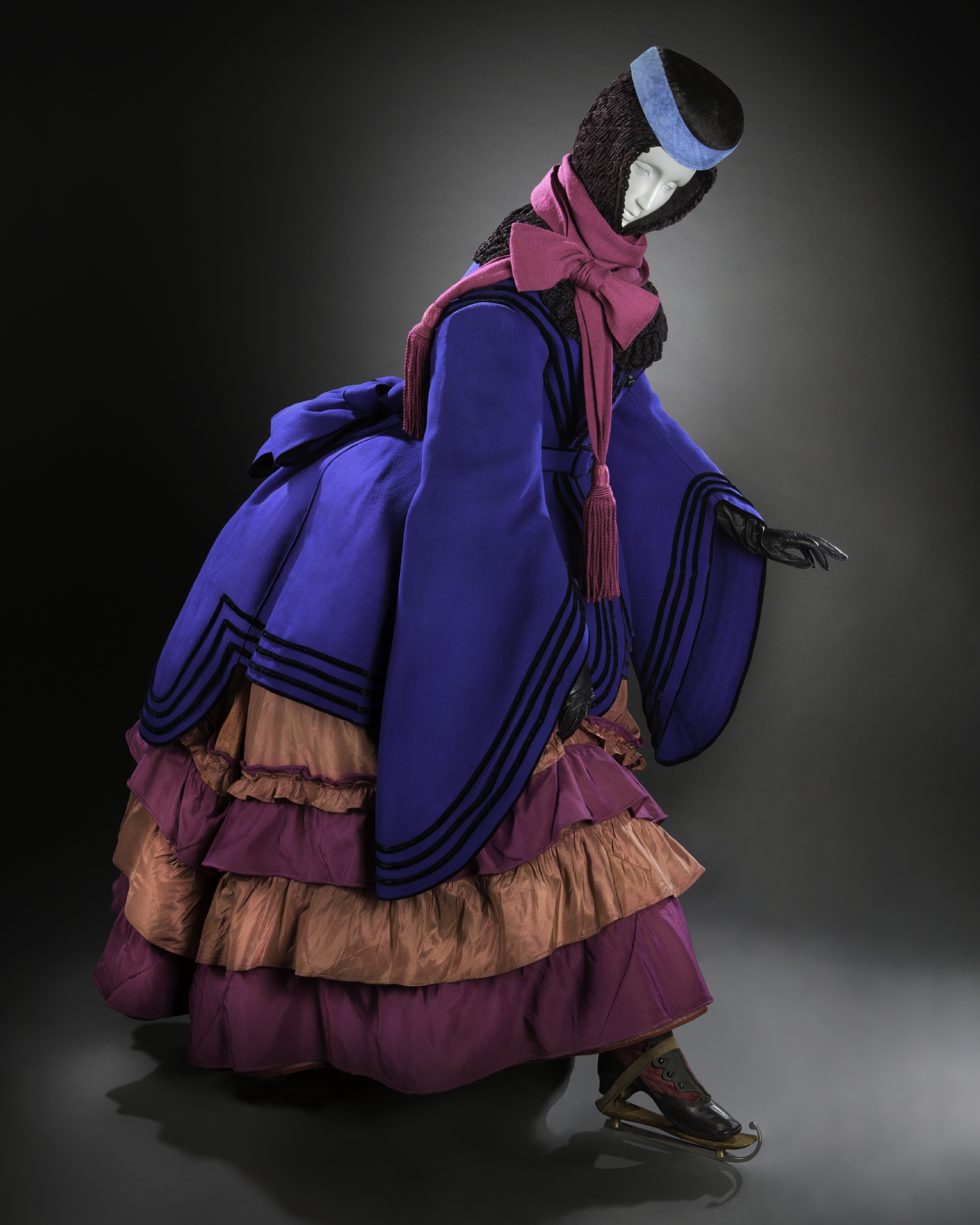 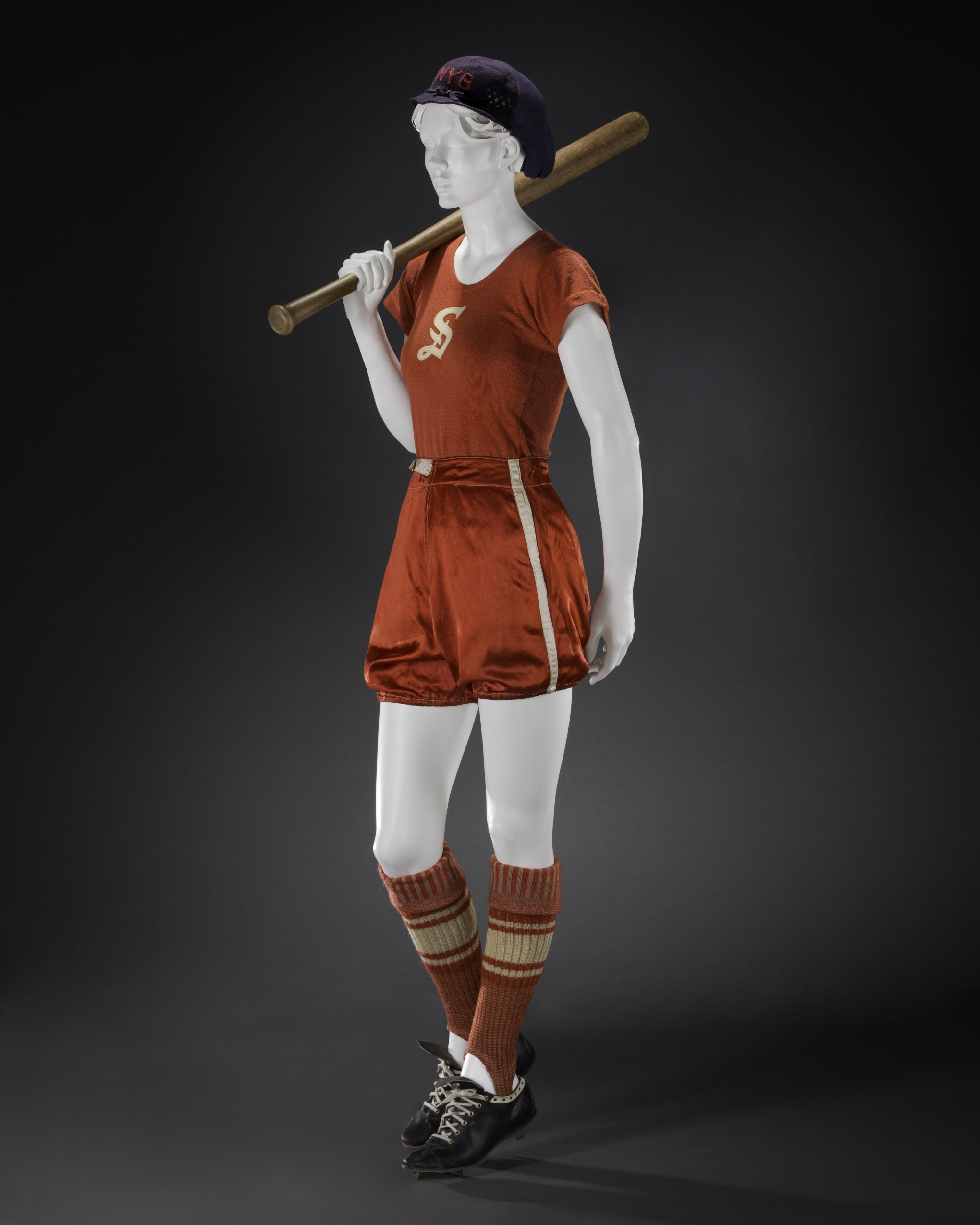 A Thirties baseball ensemble from “Sporting Fashion: Outdoor Girls 1800 to 1960,” open May 19 to Aug. 1, 2020 at the Museum of the Fashion Institute of Design and Merchandising in Los Angeles.  Courtesy